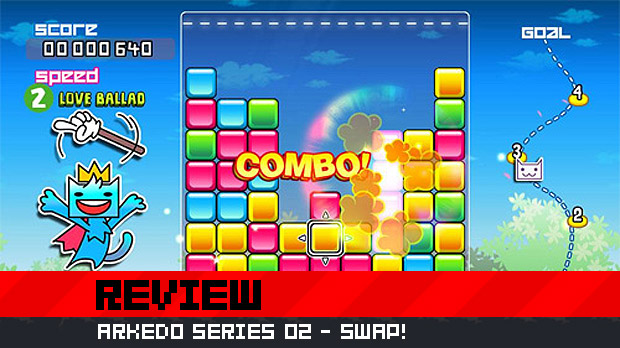 A few weeks ago, indie game developer Arkedo sent me an e-mail titled “An Easy Game from Arkedo to Dtoid, with Love”: “Do you think it would be possible to have your mad skillz colleague try and beat Level 1 AND 2 of our game? That would be awesome. We put some bright and friendly colours, so he does not get scared too quickly. And a cat.”

I’m not too sure, but I think Anthony’s getting trolled.

In any case, I rose to the challenge and did just that—I beat levels 1 and 2 of Arkedo Series – 02 SWAP! without dying. Of course, I eventually beat the whole thing, but it took a lot more tries and something almost, but not quite, entirely unlike strategy.

In case you’ve forgotten (or never got the memo to begin with), Arkedo is trying to make one indie game per month, ostensibly designed around one simple game mechanic. Last month they gave us a platformer titled JUMP!. This month, we’re presented with SWAP!, a “dual-stick action puzzle,” so they say.

Lending truth to the phrase “drunk as a lord,” and perhaps as an homage to Katamari Damacy, the premise of SWAP! is simple: King Kat got raging drunk last night and, hungover, must find his way back to his castle. Oddly enough, crossing the five different regions of his castle involves Panel de Pon-inspired, match-four-colored-blocks puzzling.

As rows and rows of colored blocks fill the screen, players re-arrange pieces in order to align four of them in horizontal rows or vertical columns. The left stick moves the cursor, and the right switches blocks around. If you score enough points before the screen fills up with blocks, King Kat moves one step closer to his Kastle. If not, game over.

If that sounds a little simplistic, that’s because it is. There’s some kink—coins and treasure boxes boost your points, lightning bolts can clear the entire screen, and some items can temporarily stop the blocks’ upward progress—but it’s largely a variation on the same type of match-four puzzling gamers have been doing for decades. Arkedo tried to gussy the game up with extra modes—”Arcade,” a mad dash to beat your best score; and “Challenge,” a set of, um, challenges: i.e. clear seven blocks at once, or use four coins in one move—but they don’t do much to overcome the game’s critical flaw.

As you progress through story mode, you’ll get little tutorial pop-ups that explain how to play the game, how to set up combos, and how to score the most bonus points. Since you have to score a certain amount of points before King Kat can get through the level, setting up bonuses and score multipliers seems like a great idea. The Challenge mode reinforces this, as almost all of them require you set up a chain reaction of combos and bonuses, skills that you could ostensibly take back into Arcade mode to score big points. Given that SWAP! will let you drag pieces from one end of the board to another with no penalty, setting up combos is relatively straightforward, assuming you can think that far ahead.

However, setting up these combos (the way the game suggests you should) takes a lot of time, and time is something you don’t have a lot of in SWAP!. The board fills up fast; too fast for combo-ing to be a viable strategy. It seems like it would be a good way to introduce some strategy into the game: do I sacrifice my valuable time to score big points and risk losing, or do I play it safe? Unfortunately, playing it safe seems to be the only way to play, as I never managed to beat a level relying solely on smart tactics and combos, the way Arkedo wanted me to. What’s left is more a war of attrition than anything else. The end result? In a game where each mode seems to prioritize creative play, the only viable strategy is trying to create simple, horizontal rows fast enough to keep your head above the water.

What I take to be a fundamental design flaw aside, SWAP! definitely has its moments of fun. When things start heating up (i.e. when the speed hits about 7), fighting to keep the screen from filling up can be thrilling—I actually cheered when I survived the last level. My brother and girlfriend were over at the time and between them trying to coach me to victory and my own stress, we probably made a lot more noise than most puzzle games warrant. It’s just unfortunate that most of the enjoyment that can be derived from SWAP! comes from mere survival, instead of the ability to actually pull off the combos and maneuvers that Arkedo wishes you could.

I’ve come to the point where I’ve reached a dilemma. SWAP! is a solid, match-four puzzler: the controls are surprisingly tight, the presentation is cute, and the game executes everything it wants to do pretty well, some design flaws notwithstanding. On the other hand, it’s just match-four puzzling at the end of the day, right? It’s kind of hard to be engaged by SWAP! when I’ve been matching colored bricks for almost a decade, y’know?

Ultimately, I think I’d rather be generous: SWAP! might a little shallow and misguided, but it’s a fun little game, and you weren’t going to spend those 240 points on anything else, anyway. For what it’s worth, I’ll be going back to finish the challenges as soon as I get a chance.

If anything, SWAP! gives me hope that, eventually, Arkedo will get the hang of developing one indie game per month. They haven’t mentioned how long they’re going to do this, but I’m confident that, eventually, they’ll have something truly interesting to offer (not to mention that Big Bang Mini was kind of awesome).