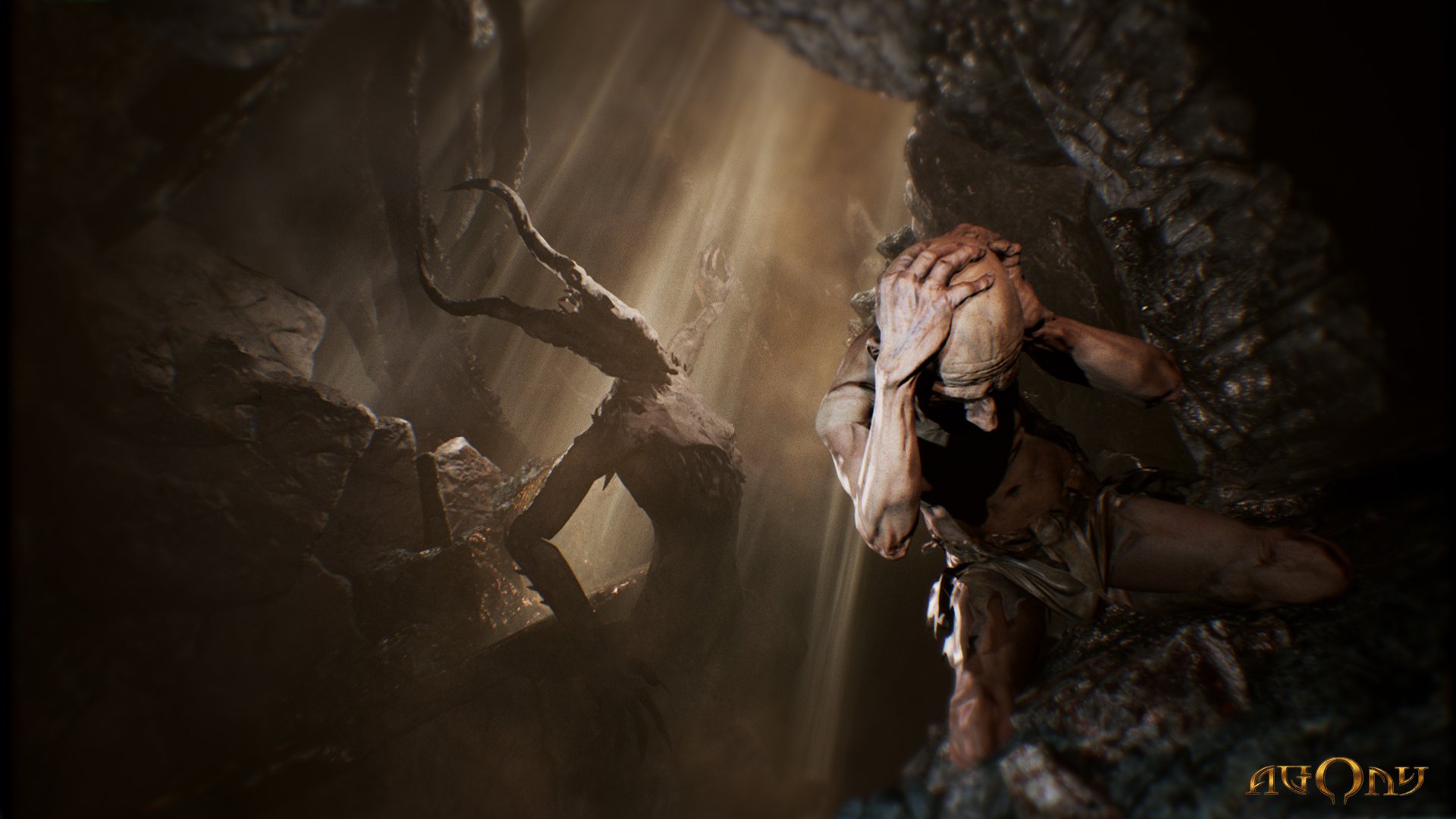 I’ll save a more colorful lede for the proper review, but this one feels perfectly appropriate for a review in progress. It’s heartfelt and it’s to the point. It’s the thought I’ve had running through my head for nearly all of the five hours I’ve been playing this game: “Agony sucks.”

It’s immediately apparent as Agony manages to put its worst foot forward first. The opening section dives straight into a fetch quest through a claustrophobic maze of rooms. It’s jarring and disorienting but doable. Right afterward, it spiritually repeats that intro by assigning another fetch quest through a literal giant sprawling maze. Complicating matters, demons patrol the whole area and will instantly kill you if they spot you.

This is where we’re “taught” Agony‘s most important mechanic. Through no real tutorialization whatsoever, we’re asked to possess one of hell’s martyred souls. By holding a button and steadying the camera so as to look directly at the martyr, the protagonist will eventually take control of this person. (Seriously, though — the game does such a poor job of explaining how this works.) It’s how Agony cheats death. If we can possess a new body quick enough, it prevents us from being sent back to a checkpoint. It’s all so finicky though, as the weird camera angles force more failures than successes.

But we need to succeed because checkpoints are limited in use. They’re manually activated by engaging a mirror, and they disappear after three deaths. If that happens, you’re sent one checkpoint further back and asked to reactivate the one you’ve used up. There’s a real sense of tension when you die twice on one checkpoint. More than anything else in Agony, you really don’t want to regress.

That’s because Agony‘s demons are usually aggressive to the point that it feels unfairly punitive. Getting past any section feels like an accomplishment. This is a survival game first and foremost, and not a particularly well-designed one. Death seems inevitable at times, and there are occasions where the best course of action is to die and possess a faraway martyr. It’ll allow you to skip through a whole area if you’re quick enough. This surely wasn’t the intended use of the death mechanic.

Even the one thing Agony really has working in its favor is something of a double-edged sword. The aesthetic — all this truly dark, twisted, macabre, and sinister environmental design — is unquestionably superb. But it’s a matter of over-saturation. It’s absolutely everywhere and it eventually loses some of its punch. There are also times when it’s tough to tell which direction to go because it’s all just so busy. 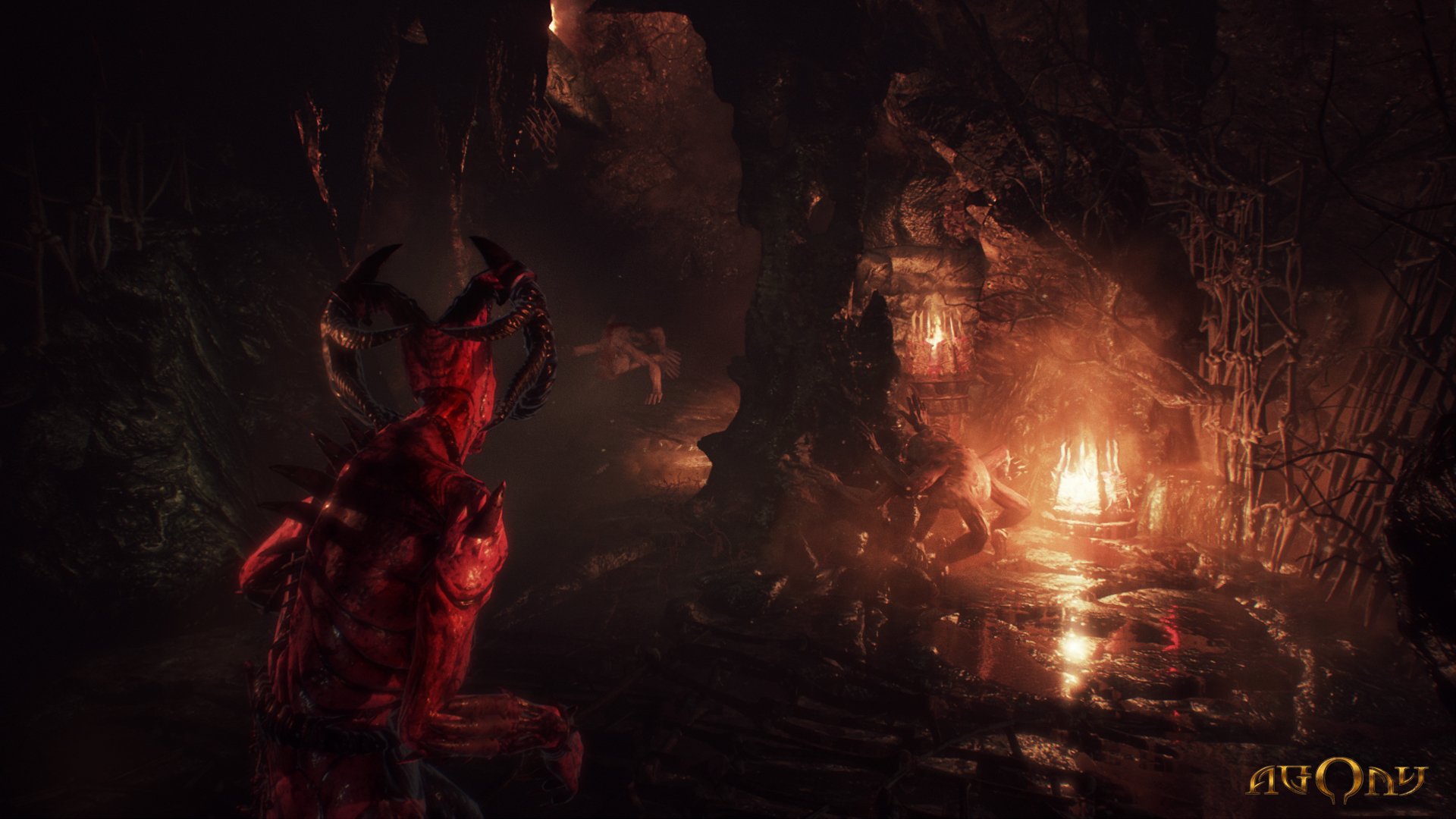 Agony isn’t a very good video game on the merits of its design, but its numerous technical issues seal its fate. On Xbox One X, there are near-constant frame drops and stuttering. There was noticeable screen tearing through almost the entirety of the second chapter. This happened. The visual assets are often flat and lower-fidelity than you’d expect — although this seems to vary across different parts of the game. The parts of the first chapter that I played on PC weren’t much better; there were still frequent moments of stuttering despite my rig hitting the recommended specs.

So, why is this a review in progress rather than a straight review? Because, as I was worrying about finishing Agony before leaving for E3 later this week, I realized something liberating: I don’t need that stress. I don’t need the anguish of playing something so tedious and unenjoyable in the lead-up to our biggest week of the year. I’ll get to it when I get to it.

But, I also feel compelled to at least offer some input before throwing it on the backburner. Judging by the list of achievements, it seems as if I’m nearly halfway done with Agony. I don’t expect anything to significantly turn around. If you really tried, you could probably come up with Seven Deadly Sins of game development that Agony‘s guilty of committing. Poorly explained mechanics, confusing and obtuse level design, technical issues galore, a narrative that’s basically absent, and it just isn’t any fun. There’s five.

Or, the more concise descriptor is in that two-word lede: Agony sucks. And that’s such a shame because it looked like it could’ve been so goddamn cool.

[This review in progress is based on a retail build of the game provided by the publisher. This is a scoreless review due to the fact that the reviewer did not complete the game.]