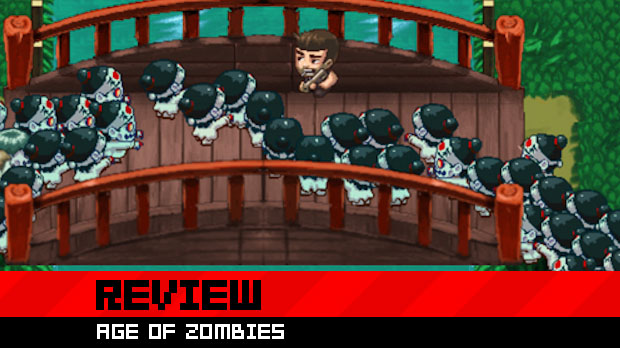 I must confess to be among those who are getting very tired of zombie games, but a good undead romp can still win my heart now and again. Halfbrick’s Age of Zombies makes no bones about the fact that it is a big dumb zombie shooter for big dumb zombie fans. Bad jokes and buckets of blood are the order of the day, and Age of Zombies delivers both in equal quantities.

So, is Age of Zombies worth your hard earned money? You’re going to need a review to tell you. Our review, more specifically! 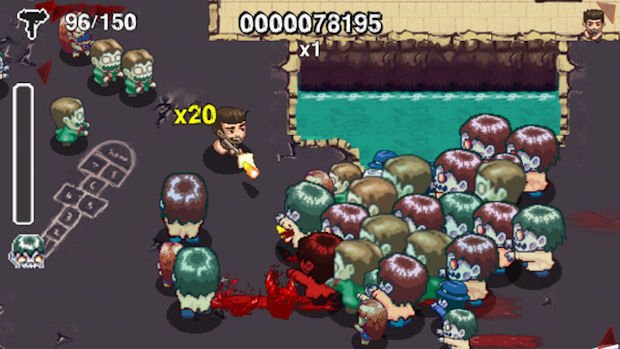 Age of Zombies is an undead-slaughtering romp through time as protagonist Barry Steakfries undoes the history-altering work of Professor Brain. Traveling to prehistoric times, thirties Chicago, ancient Egypt, medieval Japan and the future, Barry will take down zombies with all manner of weaponry, earning points for combo kills and taking on a number of bosses, all the while making silly one-liners.

It’s very hard to screw up a top-down shooter, so it’s safe to say that Age of Zombies is pretty damn playable. The aim of the game is to score points by using unique weapons and hitting as many targets as possible before the ammo runs out. Barry earns no points for using his standard gun, so the player is encouraged to run around the map, grabbing SMGs, flamethrowers, shotguns, miniguns and explosives. 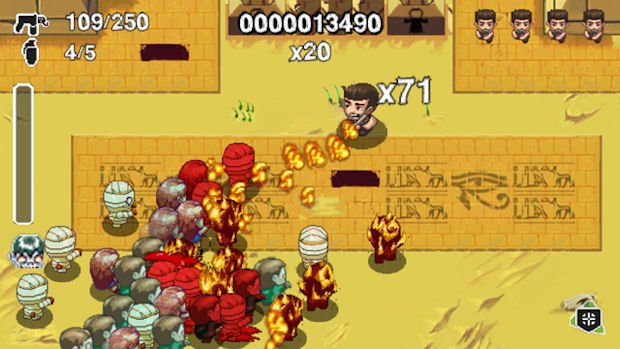 It can be immensely satisfying mowing down over 100 zombies with a minigun, and the chaining system keeps things involved and makes the player think about herding zombies into a nice fat crowds, perfect for racking up easy kills. It just feels good to get a huge pile of zombies following you and then tossing in a grenade. The weapons are varied and all of them are rather useful, and it soon becomes easy to work out how to get the maximum potential from each firearm.

Not that the game itself likes to keep things too simple. Age of Zombies, like all good top-down shooters, has plenty of challenge to it. Not only are there always more than enough zombies chasing Barry around, each time period has its own unique undead warriors, such as ninja zombies with throwing stars or zombie mobsters with guns. Some of the bosses, like the Ramen Samurai, can also be rather tricky too.

Unlike in other shooters, Barry won’t die after being hit once. Borrowing a page from the FPS handbook, Age of Zombies dispenses with one-hit kills and health meters in favor of recharging HP. If Barry gets hit enough times, the screen starts to go slightly red, and players need to avoid damage until it recovers. 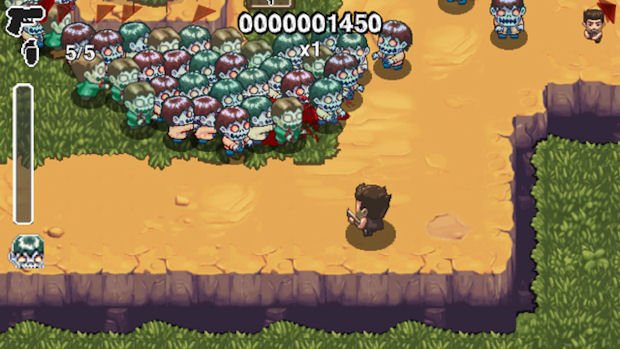 If you think that will make things easy, think again. It doesn’t matter how much health you have when the zombies close in, and that is perhaps Age of Zombies‘ biggest flaw. It is very easy to get painted into a corner, with zombies coming in from all angles at all times. Getting hemmed in against a wall, or crossing a bridge only to be surrounded on both sides, is a bit too common, and there are many times when you simply know you can’t fight your way out of a situation and have to sacrifice a life.

That frustration aside, Age of Zombies is a great little addition to the PSP Minis channel, and well worth a download. It looks pretty good, with simple cartoon visuals and over-the-top gore, and the game is also pretty funny, albeit in a rather cheesy way. Each time period also has its own announcer who shouts out the weapon names as you collect them. This is worth noting because the Japanese level sounds everso racist.

Your enjoyment of Age of Zombies will most likely be determined by your tolerance for top-down zombie shooter games, of which there are a lot. If you’ve still got room in your belly for another zombie shooter, then this is most definitely for you. It’s simple, it’s fun and it’s very silly. Those sick to death of the undead might want to give it a miss.