If there’s one developer that knows its crime-laden adventure games, it’s Cing. The small Japanese studio is, after all, responsible for one of the coolest DS games on the market, Hotel Dusk. Cing’s latest title, Again, treads familiar ground, this time putting players into the shoes of an FBI agent who has to solve a 19-year-old cold case and bring a serial killer to justice. Also, he’s psychic.

There might be a business reason why Cing’s name is not on the box and the publisher, Koei Tecmo, is taking all the credit. I like to think, however, that Cing simply doesn’t want its name attached to this title. If I’d developed this after Hotel Dusk, I’d not want my name near it either. Read on as we review Again. 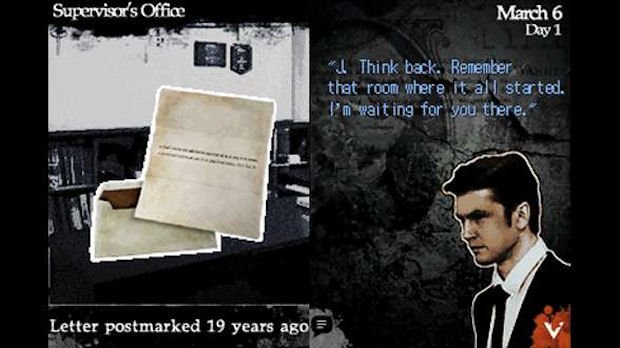 Again focuses on Jonathan Weaver, an FBI agent who ended up the sole survivor in a spate of killings instigated by a murderer known only as Providence. Nineteen years after the murders took place, Providence is at it again, apparently recreating his original killings and leaving his calling card — an Eye of Providence cut from a dollar bill — at the scene. While the cops try and solve the recent murders, Jonathan and his partner, Kate Hathaway, try to solve the original murders.

The general premise and visual style is reminiscent of a bad TV cop drama, except for the fact that Weaver can also use magic to see into the past. While Hotel Dusk felt like something of a true adventure game, Again is more of an interactive novel, forcing players to read huge wads of text and limiting movement options to a handful of static locations where more text is waiting to be read. 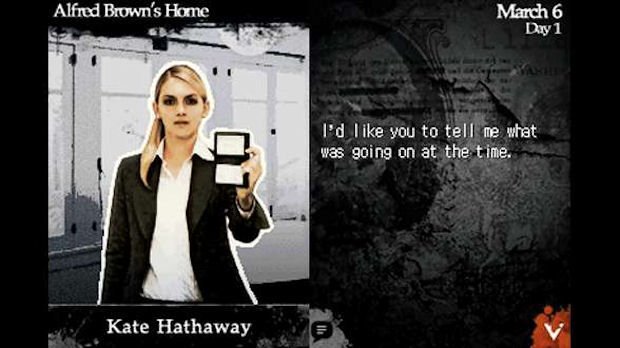 A visual style similar to Hotel Dusk is used, but instead of drawings, the characters are represented by actual photographs of “actors” that have been given a small amount of animation. Here comes the fun part of Again, as Cing has clearly used the most absurd human beings on the planet to play its cast of businessmen, detectives, and victims. These are people that wouldn’t get work on even the lowest budget TV cop drama. It’s actually a joy every time a new character is introduced, as it’s just wonderful to see what kind of gurning, over-acting fool they’ve dressed in ridiculous clothes next.

Unfortunately, that’s the only real entertainment to be had from Again, and even that’s thanks to irony. Mostly, the game is a boring, dreary, turgid affair, with poorly written, badly localized dialog and a central plot that goes from dull to stupid very quickly. The fact that Hathaway doesn’t think Weaver is a lunatic for claiming he can magically see the past is hard enough to accept, but it’s the cringe-worthy character interaction and overuse of the word “Providence” that really drags it down. 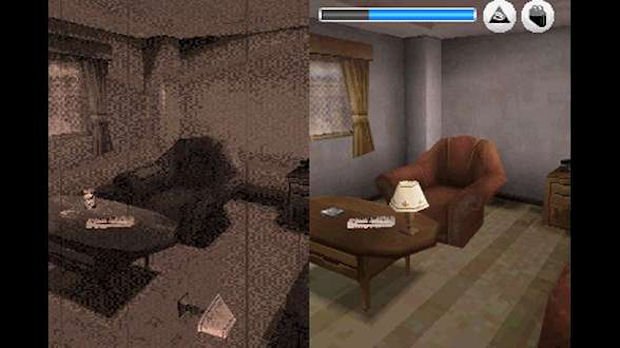 The only real “gameplay” occurs during Again‘s central conceit, where Weaver uses his fabulous secret power to look at crime scenes in the past. The DS, which is held sideways like a book, uses its two screens to represent Weaver’s vision. The left-hand screen shows the environment as it looked nineteen years ago, while the right screen shows things as they appear in reality. It’s essentially a glorified “spot the difference” game, as Weaver has to investigate the things that look different in each vision, and alter the present so it looks like the past.

There are some obvious things wrong with this, like the fact that ladders, buckets, cars and glasses always happen to be in the exact same place they were nineteen years ago. Apparently, in the world of Again, most objects go completely undisturbed for at least twenty years. However, the most apparent issue with this gimmicky gameplay is that it’s absolutely boring. Walking around a room, trying to spot contrived differences between two images in order to piece together a story that nobody cares about isn’t exactly fun.

The game is also vague about what’s supposed to be different and what isn’t. If you focus on something that the game doesn’t want you to focus on, you will lose a section of your “psyche” meter and risk getting a game over (don’t worry, the game is almost impossible to lose). So, if there are potted plants in the past and just pots in the present, don’t click on them. You’ll find out that Again doesn’t care about that. It does, however, care about the tiny cigarette butt on the floor that was so hard to see with the muddy sepia graphics and took ages to find because it was so small. 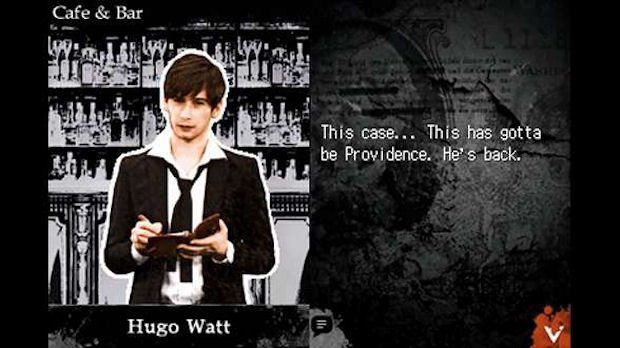 That’s really all Again is. Part tiresome graphic novel, part tiresome guessing game. The very occasional puzzles are convoluted at best, and usually consist of something insultingly easy like “turn this faucet on” or “move these bottles on a shelf.” All this nonsense isn’t even rewarded with a good story because, as we’ve already established, the plot pushes the boundaries of believability and not in an awesome, funny way.

Again is a mediocre game that provides nothing. Its story is nowhere near good enough to justify the interactive novel approach, the “spot the difference” psychic gimmick is miserable and sleep-inducing, and the characters themselves look like they’ve all escaped from a mental hospital and are playing around in the costume department of a community theater. Hotel Dusk this isn’t. It’s not even an episode of Charmed.