The best d-pad you can get on Nintendo Switch

Everything old is new again, thanks to 8bitdo‘s controller collection that looks and feels like authentic NES and SNES controllers. Not only do these controllers work wirelessly (though you can play via USB on supported devices), but they also work on a plethora of devices, including the Nintendo Switch thanks to an all-new firmware.

Now, if only Nintendo would bring the Virtual Console to the Switch. 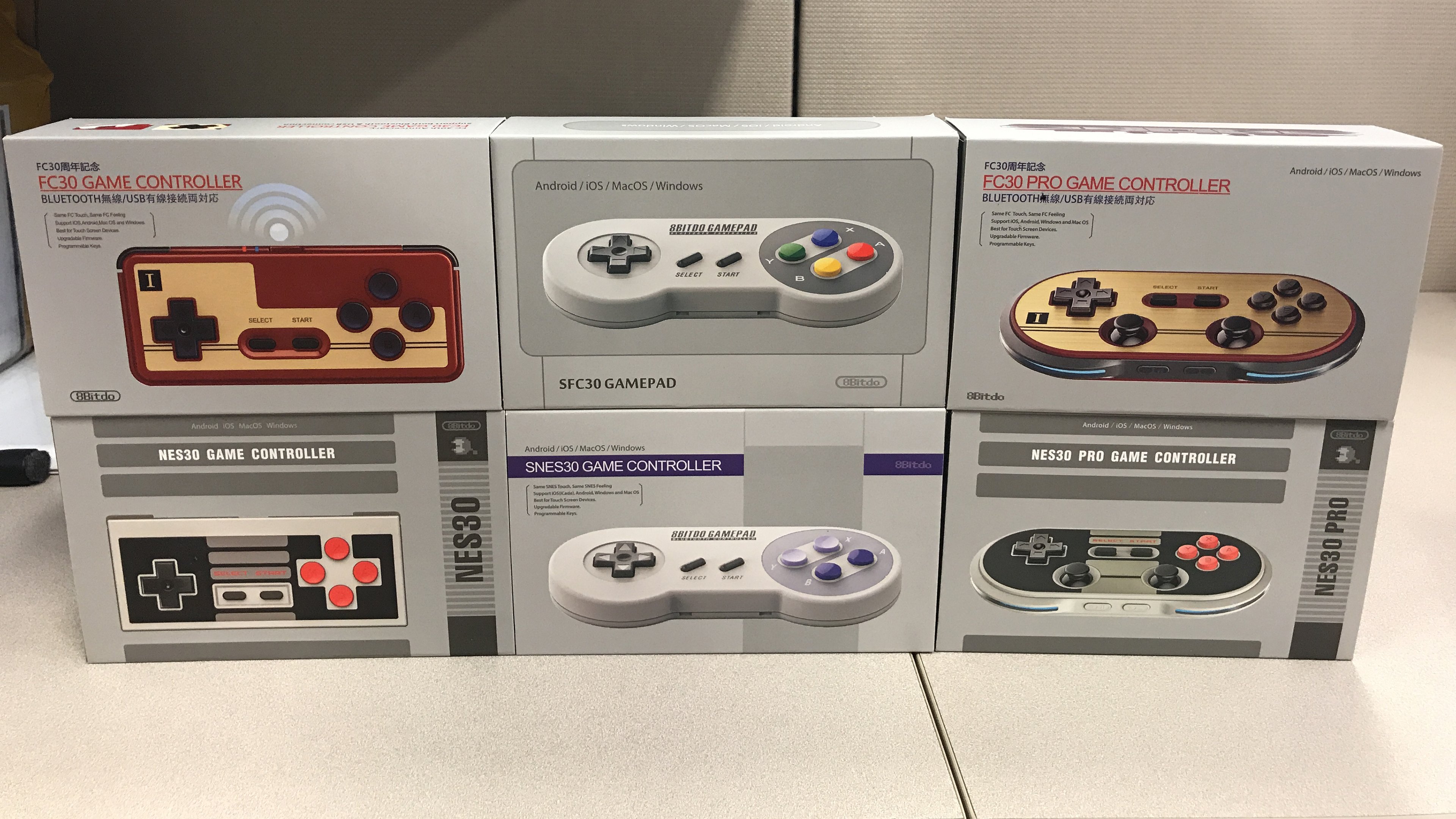 8bitdo sent me an entire set of its currently available controllers and I used them across a range of devices. If you’re looking for controllers that feel and look like authentic retro controllers, these are the most realistic I’ve found. The buttons, color schemes, and even textures of the controllers feel just like I remember them.

The NES30/FC30 controllers have the same shiny d-pad that can do a number on your thumb, with those perky select and start buttons, but an additional four buttons: two face buttons and two shoulder buttons. Obviously, the additional face buttons are to imitate modern controllers that all have four buttons. The shoulder buttons are small and close to the edges on the top of the controllers in an awkward-to-reach place that requires curling your fingers into a claw and are very clicky. Additionally, on top of each controller are two lights to let you know when it’s powered and syncing, as well as a USB port to charge, play, or update the firmware. Both versions come with an “Xtander” phone stand that snaps to the back of the controllers; it isn’t fancy but it gets the job done.

Having never used a Famicom controller before now, I have to say I like the slightly different shape and classier finish than the NES controller. The rounder edges just feel better than the NES’ squared edges, enough that it is my preferred controller when playing Shovel Knight on the Switch.

The SNES30/SFC30 controllers are nearly identical to each other aside from the slightly different color of the plastic, and button colors. The only other difference is the X and Y buttons on the SNES controller are concave, unlike the colorful SFC buttons. Otherwise, these controllers are basically the ‘dogbones’ you remember, only they can work wirelessly.

The NES30 Pro/FC30 Pro controllers are the most expensive of the bunch, but they’re also the most feature rich. These combine the visuals of the NES/FC controllers with the shape of the SNES/FC controllers while adding two small thumbsticks and a total of four bumper buttons on top. Also, they include dedicated power and sync buttons, of which the other controllers just use start and select for, and LED lights where your palms sit to provide information about sync and charge. These controllers still feature either the matte feel of the NES controller or the shiny smooth feeling of the FC. 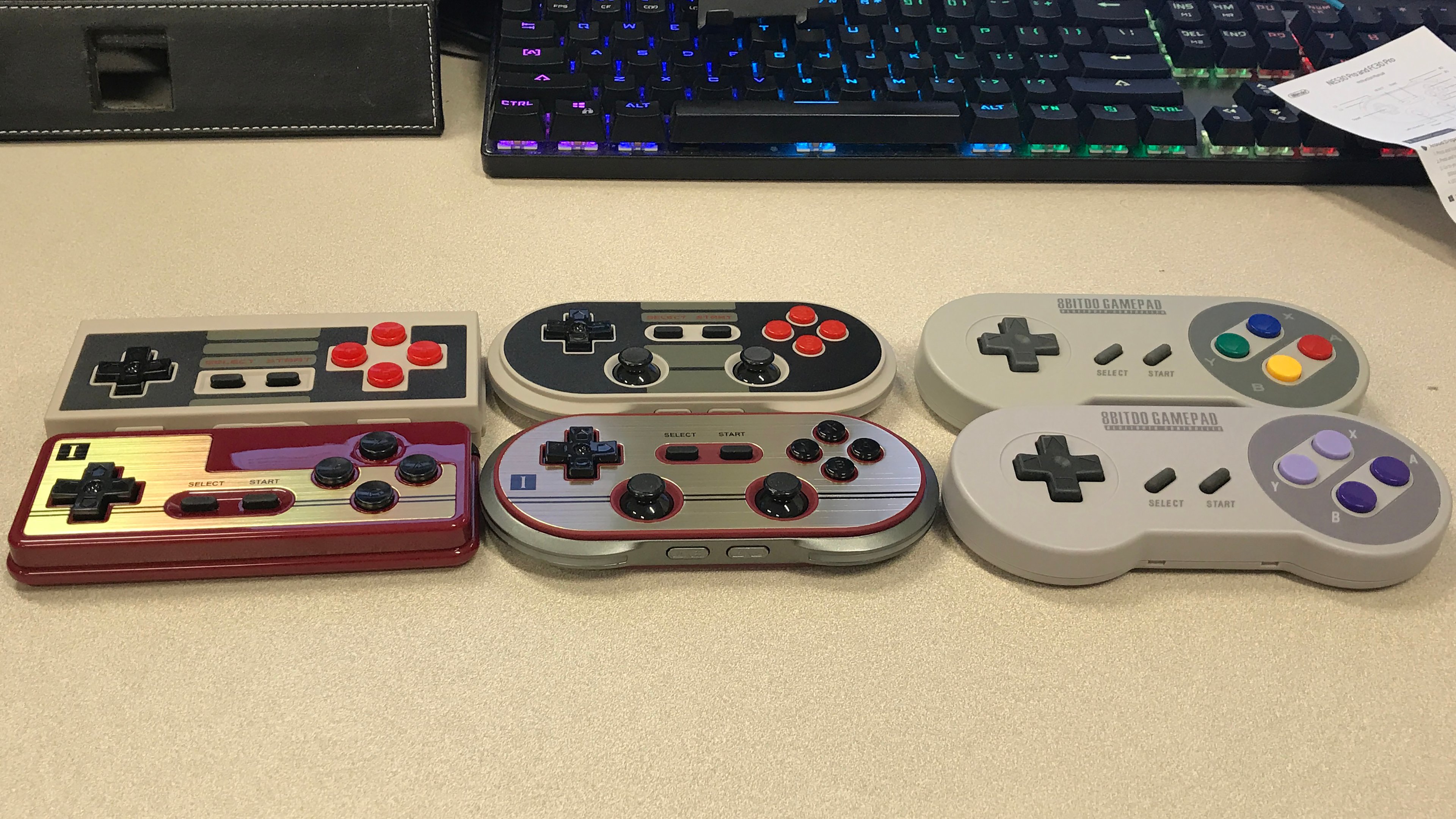 While I can appreciate the visual elements and additional buttons and thus functionality of the NES30 Pro/FC30 Pro controllers, I found these to be my least favorites to use. First off, they are a little smaller and thinner than the classic SNES/SFC controllers, which made my hands feel cramped while using them. The thumbsticks don’t provide much resistance, meaning precise movements can be a little more difficult than using a PS4 or Xbox One controller in the same situation. The d-pad is the same one used on the NES/FC controllers, which isn’t all bad (aside from the pointy edges), but I’d have much preferred the SNES/SFC d-pad that has smoothed edges. Finally, the shoulder buttons are curved with the controller with L2/R2 being half curved, half flat; they just don’t feel natural or comfortable to use.

I understand that these pro controllers are a bit of a departure since they aren’t just clones of retro controllers, but I’d have preferred the exact SNES/SFC controllers only with added sticks and triggers.

On PC, the controllers can be used wired or wirelessly and were quickly picked up by Windows 10 in either configuration. Steam even detected these bad boys and could set custom configurations for them the same way it can for the Steam Controller and PS4/Xbox One controllers. I was even a ‘naughty boy’ and downloaded the popular RetroArch emulator suite which instantly recognizes and configures the controllers for you, which is pretty sweet if you just want to use these to play the consoles they are based on.

On the Nintendo Switch, these only work wirelessly, and syncing them isn’t exactly clear from 8bitdo’s instructions. You know the screen where you have to pull the triggers on the controllers you want to use in the order of players using them? That’s where you have to go to sync. The Switch recognizes these as Nintendo’s own Pro Controllers, meaning the games they work with need to support said controller, most of which do. While these serve as cheap alternatives to Pro Controllers, they do lack rumble and gyro controls, but at least the sync and power buttons work as the home and screenshot button.

However, the d-pad on these is arguably better than that on the official Pro Controller, which sometimes can register the opposite direction of what you’re pressing. That means they are great for things like Ultra Street Fighter II: The Final Challengers, the aforementioned Shovel Knight, Blaster Master Zero, Super Bomberman R, and eventually Virtual Console releases. Clearly, 8bitdo had playing retro games in mind when making these, and as you’d imagine that is where they work best. In other words, these are not really the best controllers to use for Breath of the Wild.

There are different firmware versions available to install depending on what devices you want to use these on, and sadly the Switch-supporting version doesn’t also support iOS devices, which seems like a miss. Another concern I have is the potential for Nintendo to block these on the Switch in the future since they appear to emulate the official Pro Controllers, which I can’t imagine Nintendo approves of. When I asked 8bitdo if it feared Nintendo blocking these via an update, it gave what I’d consider to be a vague non-answer of “Nintendo’s Switch was designed with a regular Bluetooth connection, you can even plug some pre-existing keyboards into a Switch and they work in keyboard mode.” I’m not convinced.

[This review is based on retail builds of the hardware provided by the publisher.]

[The original text of this review stated the Pro controllers don’t offer the ability to press the home or screenshot button on the Nintendo Switch. This has since been corrected.]