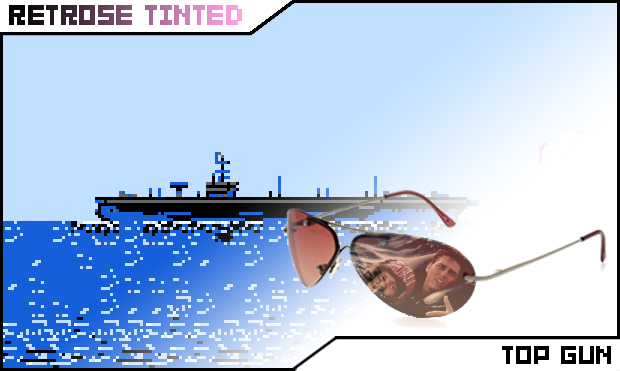 A critical eye takes time to develop. RetRose Tinted is a regular column in which I re-examine games of yesteryear to see if my memories of them live up to the reality.

I have a love/hate relationship with Top Gun. Okay, maybe “love” is too strong of a word but it’s a fairly solid flick. Sadly, I had a roommate in college who would turn the movie on to have in the background as he went to sleep. This happened every night for an entire semester. It’s only now, ten years later, that I can even stomach the theme music.

While flying home late last week, I was reminded of the game. Not because I traveled in an F-14 or due to my pilot’s callsign being “ICEMAN” (it may have been but I didn’t ask). No, it was the less than graceful dropping of the plane on to the runway, causing my posterior to jump a good six inches out of my seat which set the spark. I was about to comment to the person next to me that I could have managed a smoother landing but bit my tongue as I recalled that I never once managed to successfully land the plane in the NES version of Top Gun.

The game was either incredibly good or I was just so persistent in wanting to accomplish this feat that I played it off and on for years. My best guess? The latter, but time will tell.

Top Gun looked pretty incredible in the late eighties, at least until you made it past the title and the splash screen of a jet fighter firing its engines. In-flight is a little bit of a different matter but, really, how detailed do you really need a game which simulates flight to be? There is sky and water and both pretty much look the same.

The game consists of four missions in an undefined region. After the brief training mission, you’ll be shown a map which offers no real information and your orders consist of “destoy this thing”. The thing in question gets a little more ridiculous with every passing stage. First it’s an aircraft carrier, which may be possible but it seems rather unlikely that a single jet could take one out. Then you’re ordered to destroy an enemy base, which would be more believeable than the previous level, provided that the opposing military didn’t have the kind of money which allowed them to invest in aircraft carriers.

The final stage just confounds. “Destroy the enemy space shuttle?!” Wait, these fuckers have a space program? Why the hell am I attacking a space shuttle? And why is it firing missles at me from the platform? Clearly we are dealing with a superior foe.

Your F-14 Tomcat is armed with a machine gun and your choice of three types of missiles. The machine gun is not fully automatic for some reason, requiring you to tap to fire, and is capable of taking out enemy planes in a single hit. Ships, tanks and other craft all require considerably more firepower to eliminate and, while it’s possible to destroy them with your gun, you’ll primarily be using missiles to handle these foes.

Thing is, I can’t really tell a huge difference between the missle types. They each have a damage rating and it’s directly proportional to the number of missles you hace carry on your jet. They all seem to blow things up the same way, however, though perhaps I just wasn’t using the weaker missiles enough to notice.

Once you’re in the air, you’ll face opponents in the air, sea and on land. There is an impressive variety of enemy types, from anti-aircraft missile launchers and submarines to bomber jets which have no rightful place in a dogfight scenario.  They are all armed in a similar manner to you and things can get pretty hairy at times with multiple attackers firing their guns while missiles rocket toward you. You can take a fair number of hits from gunfire but if one missile makes it through to you, it’s all over.

Thing is, while you can shoot down missiles, it’s laughably easy to avoid them a lot of the time. Since this is more like an arcade shooter than an actual flight sim, there’s no sort of restriction on where you can fly to. It’s possible to essentially fly in circles ans you’ll still make it to your destination eventually.

One aspect of the game which I’ve always thought was particularly cool is when an enemy plane gets behind you and starts locking on. The main display of your instrument panel shows a rear view of your plane’s tail fins and you must use some evasive maneuvers to get the enemy off of your ass. These are scripted into the levels and it’s pretty easy to shake them, but it still adds something to the intensity of a battle to have a guy suddenly show up behind you and have a klaxon wailing as you deal with everything else onscreen.

Most of the levels are lengthy enough that you’ll have to stop to refuel along the way and you’ll do this in-flight. When your fuel gauge gets low, an alert starts ringing and you’ll have to press start to call in the fuel carrier. This is just super cool to me for some reason, probably because it’s a simplified version of the landing sequence that I have always had trouble with. You have to line up your plane with the fueling pipe and be traveling at a speed appropriate for making the connection. When successful, it refills both your fuel and your missiles, giving you a much needed bit of extra oomph.

Since I’ve brushed against the topic of the landing sequence, let’s take a look at that. At the end of every mission, you’ll have to successfully plant your jet on the runway of an aircraft carrier. The instrument panel guides you along with information about what you’ll need to do to in order to be properly lined up and at the right speed for landing. The A and B buttons respectively speed you up and slow you down. Once you’ve made your approach, the view shifts to a landscape of the carrier and you get to watch as your plane either lands or crashes into the ocean. One of these things happened to me every time I played as a child.

It’s only now that I’ve noticed that the indicator informs you of the ideal speed and altitude to land with. All of that time I spent cursing the game because it was telling me to speed up or slow down and it turns out that it was giving me more than enough information to accomplish the goal all the while. Armed with that information, I’m now able to land the craft with an 80% success rate.

It kills me how simple the entire thing was the whole time. I can’t tell you how freaking stupid I felt when I made the observation and landed the plane on my first attempt.

The worst part is that, without this portion of the game feeling challenging any longer, Top Gun doesn’t feel fun to me. The gameplay is pretty bland and relies on the switching things up with refueling and tailing jets, which is effective but wears thin as every level feels exactly the same as the previous one. I think it’s time to just put the game back on the shelf, confident in my ability to fly an F-14, and never look at it again.