I’m a huge fan of is the steampunk genre of fiction. I love the fusion of clockwork-driven high-technology dirtying the skies of a more elegant and romantic era. The juxtaposition is beautiful.

This brings me to The Chaos Engine (known in the US as Soldiers of Fortune, but I’m going to keep calling it The Chaos Engine because it’s a waaay cooler name). Not only does it feature a hyper-advanced, war-torn 19th century, it’s a cooperative and challenging game.

This was frequently a rental for my Genesis. It was brutally difficult and, no matter how I persisted, I never seemed to make it past the first few levels. Yet, the gameplay was so compelling that I kept coming back for more.

It’s odd that I don’t hear more people mention it, because it’s one of my favorite games from that console generation. Maybe it’s because they haven’t heard of it. Hit the jump and I’ll do what I can to fix that. 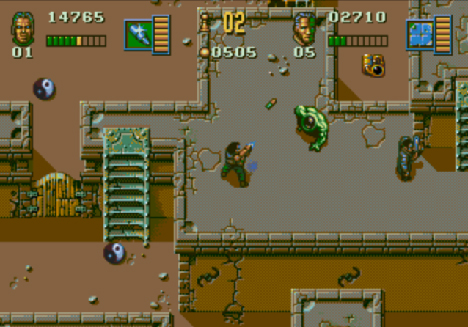 The premise of this Amiga game (also available for SNES and Genesis) from the Bitmap Brothers is that a mad scientist by the name of Baron Fortesque built a bizarre contraption called “The Chaos Engine.” Think of it like a Victorian-era Skynet with the ability to warp reality and you’re getting the right idea. As you can probably imagine, things went awry and the machine imprisoned Fortesque in his mansion and proceeded to wreak havoc on the world. Two soldiers for hire have decided to make themselves rich by saving the world.

It’s a top-down shooter, but one with far more complexity than one usually finds in the genre. The game combines the RPG elements of character statistics, experience points and exploration with cooperative action gameplay.

At the beginning of the game, you’ll choose two of the available six characters to play. Each is a unique combination of weapon type, stats (both minimums and maximums) and special abilities. The Scientist, for example, has very low health and a weak weapon, but starts the game with the ability to heal damage. Navvie, on the other hand, has a powerful weapon and devastating dynamite attack but has rather mediocre special abilities otherwise and moves slowly. 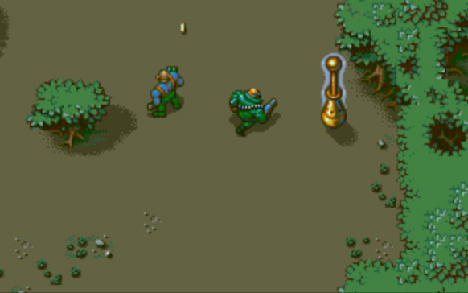 In a two-player game, each person controls one of the characters. If you’re playing alone, the AI handles the second character and each merc behaves differently based on a stat that determines their intelligence.The amazing part is that this AI actually does a really competent job. If you have a smart character providing you with backup, it will very capably avoid taking damage, shoot around corners and pick up cash while avoiding power-ups you might want for yourself.

Each of the 16 levels in The Chaos Engine plays out like a big maze. In order to open the exit door of a level, you must activate a specific number of nodes. Finding these is half the challenge as the levels twist and turn, often forcing you to backtrack, all the while facing down a constant barrage of strange, mutant beasts and armored turrets.

The level design is both a thing of beauty and a cause of frustration. Most of them have multiple paths through them and some even have multiple exits that will start you in different locations on the following level. Picking up one set of keys to open one path may cause another to close, shutting you off from valuable items and cash. They’re riddled with hidden items and routes also, some of which require you to undergo complicated procedures before claiming their rewards.

Just picking up something lying on the ground can be dangerous. Nearly every time you collect an item, new enemy spawn points will appear. Essentially, the whole game is one booby-trap after another. And while few of the creatures you encounter are difficult to kill,  their non-stop presence becomes and endurance trial as you struggle to stay alive.

It doesn’t help that pretty much every character has a depressingly low amount of health at the start of the game. It’s very easy to outright die in only the second level if you aren’t paying attention, since a mere three hits is enough to kill some characters. Projectile attacks from enemies typically only remove on bar of health but accidentally bumping into one can put you on the verge of death almost instantly. 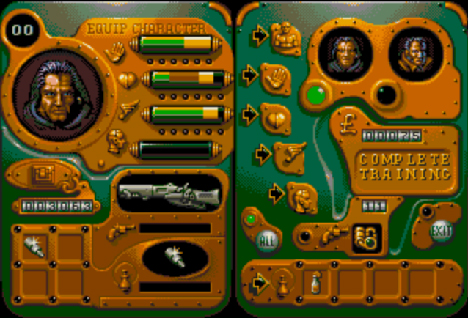 Your character does improve over time, however. After every two stages, you are given the opportunity to spend the money you have collected on upgrading your stats, restoring health and buying extra lives. As you progress further, the character’s other special abilities start to become available for purchase. While some of the mercs share an ability or two, the order in which they arrive on the upgrade screen.

The game utilizes a password feature where you can return the start of the most recent world (set of four levels). Interestingly, when youuse a password, your character is returned to their default statistics and you’re given any money you’ve earned up to that point of the game to redistribute amongst stats. It’s an interesting feature, but it’s also a little broken, since it doesn’t account for any weapon upgrades you may have picked up through the course of play, resulting in a severely less powerful character should you have to continue or resume the game at a later time. 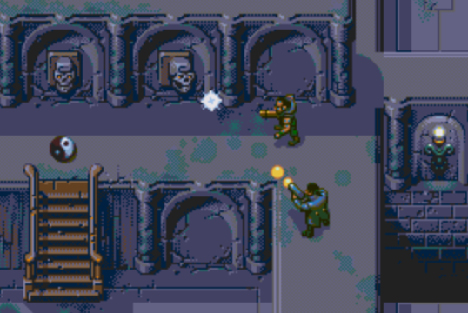 The Chaos Engine is a challenging and fun game. It never seems as though you have enough lives or enough cash to get through but every time you make it a level further than you did the last time really feels like an accomplishment. I adore the visual style and atmosphere and the music, while nothing particularly special, isn’t terribly intrusive. The digitized voices that crop up when you pick up certain items or open an exit door of a level are so bad that they’re actually good too.

This is a great game if you happen to find it in a used shop. It’s excellent with a friend to play along with but it still manages to be as successful in a single-player experience.