Like many, I’ve been playing a lot of Castle Crashers in the last couple of weeks and it has me thinking about other 2D brawler games I’ve enjoyed over the years. When these games were popular, I played every one I could get my hands on. The Teenage Mutant Ninja Turtles series, The Simpsons arcade game, Double Dragon and the landmark, cult classic River City Ransom were all considerations for this week’s RetRose Tinted.

I settled on Streets of Rage 2 because I probably played it more than any other game of its type. It was a pack-in title for a Sega Genesis bundle when my neighbor across the street decided to step out of the 8-Bit era. We played it constantly, to the point where we knew every level backwards and forwards and had completed it with every character many times. To this day, I can still recall the locations of nearly every hidden 1up and weapon.

It’s been a while since I really gave it serious play, however. I picked the game up for Virtual Console when it was released some time ago, gave it a short run-through and then moved on to other things. Join me after the jump as I take a closer look back at what I remember as one of the finest examples of the 2D brawler genre. 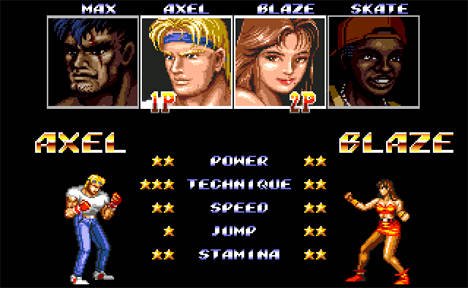 Streets of Rage 2 is one of the first brawlers I can remember playing where the characters had distinct strengths and weaknesses that weren’t exclusively limited to how much damage they inflict versus the amount they receive. They’re all balanced in their own way, with Axel and Blaze being a little more middle-of-the-road, while Skate and Max are more severe extremes.

In addition to characters being faster or stronger than others, there are subtle differences as well. Skate, for example, is the only character to have a dash at their disposal and can use it to drop multiple enemies with a rolling dive. Blaze is a much more competent knife-weilder and uses them in a two-hit combo that throws enemies to the ground. 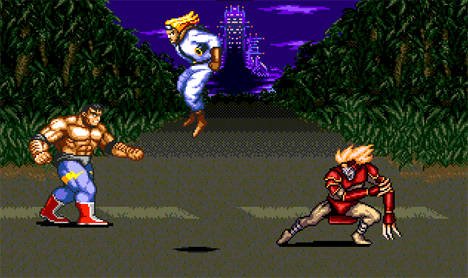 The movesets are pretty impressive for a game from the early nineties with only three buttons on the controller. Standard attacks are, of course, a combo with a varying number of hits depending on the character. Max only swings a few times in a combo and has a pretty limited range but every strike hurts. Skate, on the other hand, chips away at opponents and is better for keeping villains on the ground.

Each character also has two special attacks that offer different advantages. Simply pressing the special attack button alone launches you into an attack that clears away enemies that have been ganging up on you if you start to become overwhelmed. Holding a direction and pressing the button instead attacks with a powerful move that can inflict a considerable amount of damage if it lands. Both special attacks will drain a little bit of your health, so there’s some strategy involved in when to deploy them. 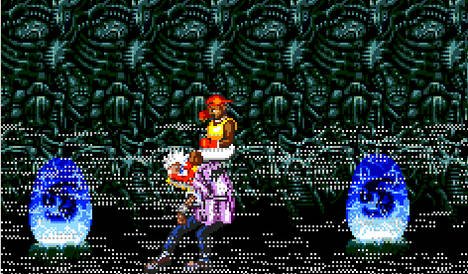 In addition, everyone is able to grab enemies, and the majority of opponents can be grappled with. Once held, attacks change depending on which side of their body you are facing. You can switch your orientation by flipping over their shoulders. This allows you to change up your attacks and maximize damage by chaining moves together. I think my favorite move in the game involves Skate jumping up on to the shoulders of an enemy and pummeling their head repeatedly.

One of the most entertaining aspects of the game lies in its environments. Instead of opting for the standard areas we’ve come to expect from the genre (such as slums, sewers and factories), Streets of Rage 2 ventures just a little bit into the absurd. An entire stage is set in an amusement park and you’ll pass through a pirate-themed ride and a very strange locale clearly derived from the Alien films. I think my favorite is the baseball stadium where the pitcher’s mound descends into a hidden base. It’s just a little surreal to be fighting in the brawler cliche of an elevator when it is designed in such a way. 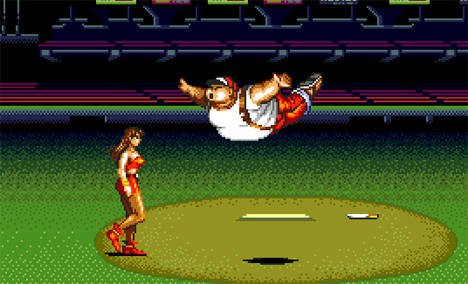 Enemies have a good amount of of that surreal quality as well. Sure, there are the standard street punks to beat on, but things quickly take a turn for the wierd. Motorcycle gangs wearing neon outfits festooned with tiger stripes and fur lining start showing up. Morbidly obese men in trucker hats breathing fire are another example.

With the exception of thee boss enemies, every boss becomes a standard enemy-type as the game progresses. They don’t have a significant decrease in their health either (some will even have more) and you can be assaulted by multiple bosses from different levels at the same time. Fights become brutal affairs in the lead-up to the final confrontation, with swarms of bad guys assaulting you from all sides. 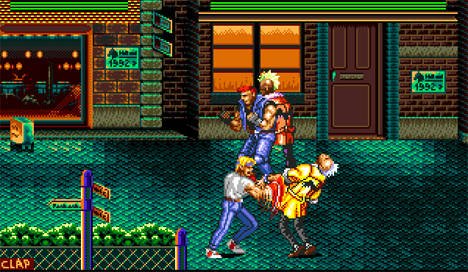 As a brawler, Streets of Rage 2 is pretty deep but I don’t think I can play it anymore. It hasn’t aged as well as I would have hoped and the pace isn’t nearly fast enough for me now. I constantly felt like I was walking through deep snow with how slowly the characters move. The music is really repetitive and annoying, to the point that I had to mute my television to prevent myself from just turning off the game.

In many ways, I think Castle Crashers may have ruined the experience of classic brawling games for me. It has demonstrated practically every element that makes for a good game in the genre, packaged it in an attractive design and offered an incredible amount of replay value. In the face of that, it’s hard to look at any game in the genre the same way again.