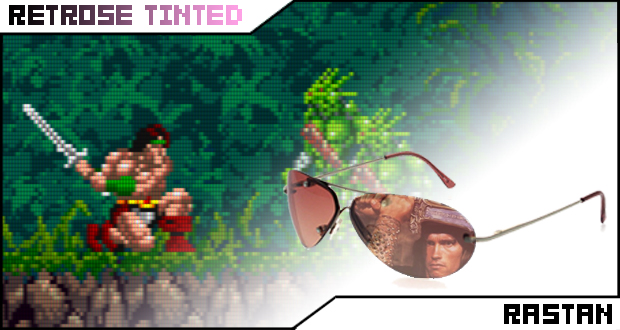 [A critical eye takes time to develop. RetRose Tinted is a regular column in which I re-examine games of yesteryear to see if my memories of them live up to the reality.]

Rastan is a game which I actively sought out as a child. Every time I went to an arcade, one of the very first things I would do is check to see if they had a machine available to play. There was something epic about it that drew me in, even though I was not any good at it and probably never cleared the first stage.

Nevertheless, I would sit there and pump coins in, playing those opening minutes over and over again. But how much fun could it have possibly been if I could not make any progress in it? I would not say that I was an easily frustrated kid, but consistently having my ass handed to me does not sound like the sort of thing even I would have tolerated.

I guess the only way to find out is to go and play it again. 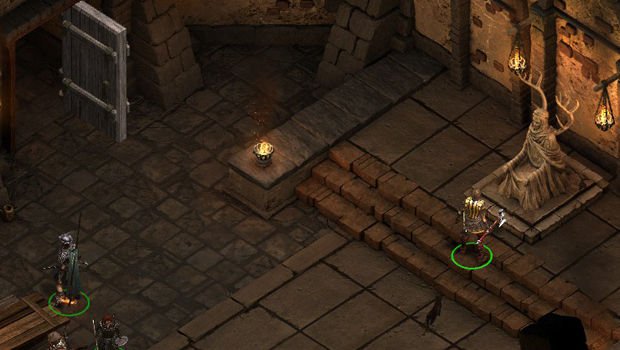 Contrary to popular opinion, Rastan is not an arcade game. It merely resembles one. The true nature of a Rastan machine is far more sinister. These cabinets are nothing less than the physical manifestation of damned souls meant to burn in the eternal fires of Hell for their unrelenting greed on Earth. Now, returned to the mortal plane as an infernal device, they exist only to feed an insatiable lust for quarters.

As the titular barbarian, players swing a very large sword while traversing five large levels filled with a constant flow of dangerous enemies, deadly traps and all other manner of things which kill. Everything, from the smallest bat to the largest demon can snuff you out quicker than Paris Hilton can jump in front of a camera. This game is ridiculously hard.

The biggest impediment when it comes to calling Rastan unfair is that it’s actually designed really, really well. Controls are exceptionally responsive and the range of motion the character has — attacking upwards, crouching, two jump heights and a downward strike from mid-air — is completely reasonable for the challenges. And he’s quick, at that, swinging the sword with wild abandon and snapping right back out of his animation.

No, it’s just that the level design is utterly brutal. I’ll give you an example. See the image just above this paragraph? Allow me to explain why it is that I have died in this exact location half a dozen times today. The bats spawned in just to the left of what you’re seeing. Bats will follow you forever and may only take one hit to kill, but they’re tiny and will glom on to you to drain health, and are practically impossible to hit using a normal attack. At that point, they can really only be taken out with a downward strike.

So, we have the bats moving in. Then there’s the lava pit to the right and a swinging rope. This means that you have to wait for the appropriate time to grab the rope, allowing the bats to get even closer. God forbid they catch up to you in the midst of that jump, since they’ll just kill you while you swing to the other side. Oh, and if you stand there for more than a couple of seconds, the wall to the left starts moving out to push you into the fire pit.

This is the first stage.

Even if the design of the levels is cruel, there are some excellent aspects to it. Many of the stages offer some mildly divergent paths you can take, which may offer some sort of special bonus or simply have a bunch of difficult-to-avoid traps. Occasionally, it will even dead-end on you. This may annoy some people who have a beef with games that require a memorization skill but I’ve always found it to be a thrilling surprise.

The game’s bosses are equally ridiculous challenges. The best hope you have of defeating them is to come into their chamber with a mostly full health bar and one of the special weapons. Under those circumstances, they aren’t all that difficult. But fighting them with only your basic sword even on a fresh life can be a challenge. Most of them have some sort of ranged attack that will make your life hell. And, since your range is so limited with the sword, you’ll have to get in close and take damage from coming into contact with them while they jump around and laugh at your pathetic attempts.

As I understand it (not having experienced it myself because I have neither the skill nor the patience) the fourth boss encounter is almost impossible to complete without taking advantage of a maneuver in which you jump towards a wall from a chain. Oh, and the fifth level? Yeah, you can’t even continue on that one. Using a second credit pops you right back to the beginning of the stage.

To help the player along, there are a few special weapons that Rastan can acquire. There’s a battle axe and a morningstar which offer a much-needed improvement to his range in addition to some extra damage against those enemies who require more than one hit to kill. A flaming sword can also be collected which fires off a fireball every time you swing it.

Then there are a ton of other power-ups that enemies drop. Many of them, such as gems, only serve to increase your score. Other items have different effects, but I’ll be damned if I can figure out what most of them do. There are occasional potions which can restore your health or take some away and a bunch of jewelry which seems clearly important since their icons appear below the action after you’ve grabbed them. I’ve yet to see a cabinet that actually explains what they do. While I’m certain that the internet has the answers I seek, however, I just can’t bring myself to spoil their mystery.

If you’ve ever finished Rastan, I would like to shake your hand. You are a better man than I. And, yet, in spite of all the frustration the game causes me, I absolutely love it. The fluid animations are excellent and it has a really appealing visual design for the enemies, which have fantastic variety. The music is some of the best I’ve heard from an eighties arcade game, too.

Rastan was released on the Taito Legends collection for PlayStation 2 and Xbox and that disc is worth buying for this title alone (I’m pretty sure that’s why I own it), not to mention the other excellent arcade games which it contains. Just don’t expect to kick its ass or you’re going to wind up with a sorely bruised ego.