The save feature is something we simply expect from videogames today. Saving has become so ingrained into the medium that practically all games now do it for you automatically. But when console gaming was still in its earlier stages, complicated passwords were much more common, probably due to the expense of manufacturing cartridges that used a battery to maintain your save files.

The problem with passwords, apart from the irritation of having to enter them in using a controller, is that they were one more thing you had to keep track of. Some of us kept notebooks with all of our passwords in them. More often than not, you’d just jot one down on a spare piece of paper. And when you lost the paper (or, God forbid, a notebook), you would start the game over from the beginning again.

Many of the hundred or so cartridges in my NES library use passwords to continue progress, but Rad Gravity is unique among them. Wrapped around the back of the cart are two strips of masking tape with a password to the final level of the game written on them in magic marker. It took me the better part of a summer to earn the code and I wasn’t about to lose all of that hard work. It’s been there for fifteen years and I have yet to finish that final level.

Of course, I was barely a teenager at that time. I’ve played a lot of really challenging games since. Maybe now I can complete it and close another chapter of my gaming history. 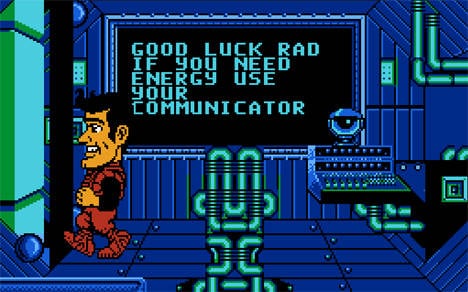 The Adventures of Rad Gravity follows its titular character as he attempts to save the galaxy. Set in the distant future, mankind is being oppressed by an evil mutant named Agathos. A thousand years before, Agathos shattered the Union of Planets by shutting down the four unification computers which maintained communications in the Union, causing chaos to erupt. Kakos, one of these powerful, sentient comptuer systems has been found buried on the planet Quark and reactivated. With the help of Kakos and his own mighty chin, Rad Gravity must search the galaxy for the other three unification comptuers, reactivate the network and defeat Agathos.

The game is structured with nine levels, each taking place on a different planet in the galaxy. At the start of the game, Kakos only has teleport coordinates for the surface of the planet Cyberia. In order to gain access to other planets, you must acquire new sets of coordinates by exploring the worlds you can already visit. Occasionally, the game will be interrupted with a level that isn’t part of your main quest, but must be completed in order to proceed, which is a pretty fun way of trying to trick the player into thinking there’s a real narrative at work here. 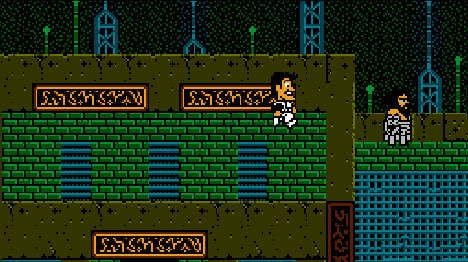 Every planet is unique, with different enemies and environments. The names usually tell you everything you really need to know about them before you hit the surface. Sauria is populated by dinosaurs, for example, while Volcania has (you guessed it) a whole lot of deadly lava. They may not be the most inventive names, but they serve the necessary purpose.

Design of the levels is, at times, both brilliant and maddening. Most of them feature puzzles that require you to open gates or move blocks to get a little extra jump height. One particularly odd puzzle has you collecting a bone for a dog so he will herd a cow, which you ride upon to reach the exit to an area. Secret rooms containing bonus items are quite common as well, using invisible paths or difficult to access platforms to hide their treasures. 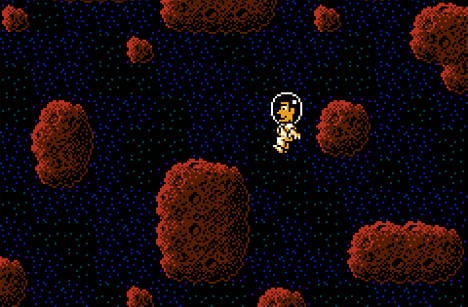 The diversity of levels adds significantly to the charm of this game. Only a few require you to have specific items in your inventory to complete them, meaning that you can complete many levels in the order of your choosing, provided you have found its teleport location. You can also return to almost every level in the game after you have completed it to search for items you may have missed.

Two levels really stand out as being exceptionally good. The first is Turvia, a planet which is inexplicably upside-down. It seems silly to think that something as simple as just vertically flipping a level hadn’t been done before this, but I can’t think of a single game prior ro Rad Gravity with a level like it. The second really different level starts with Rad floating through an asteroid field and firing his gun to propel himself. There aren’t a whole lot of things to kill you there, so it’s just fun to bounce Rad off asteroids in the vacuum of space. 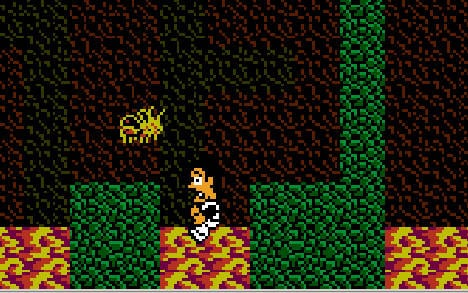 This is one of those titles where you can’t help but feel like the designers had a lot of hatred for people who play videogames. Much of the game features sections with many narrow platforms. Around these platforms will be a swarm of enemies. Beneath, lava or water that kills instantly. Rad moves so quickly that a great deal of precision is required to make sure you land where you intend to. And, of course, getting hit will knock Rad backwards, often to his doom. This happens constantly.

There are also no healing items in the game whatsoever. The only way to restore Rad’s health is to use the communcator to return to his ship. This means starting a level from the beginning in almost every instance. There are a couple of levels with a mid-point that you can teleport directly to, but they are far and away the exception to the rule.

Thankfully, through the course of the game Rad can build an impressive amount of health. Nearly every level contains a health tank that increases Rad’s maximum life. Adding to his defensive capabilities, there are three sets of armor hidden in the game which will dramatically reduce the amount of damage taken from enemies. If you’re diligent in finding them, it is possible to reach a point where death by running out of energy is fairly infrequent. 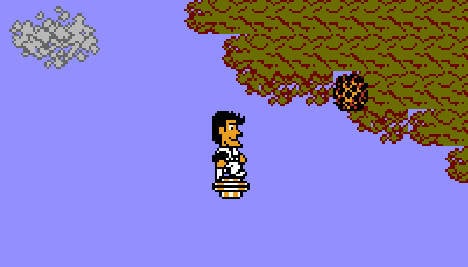 Rad starts the game with an energy sword, which limits his ability to attacking enemies right next to him. Fairly early on, a laser pistol can be found and both of these weapons have upgrades available to them. His third weapon, crystalline grenades, are a mid-range, powerful attack.

Other items Rad will need to complete his quest include a personal teleporter and an energy disk. The teleporter has two parts, a beacon and a controller. When the item is used, Rad drops the beacon. Used a second time, he is teleported to wherever the beacon lies. The energy disk allows Rad to essentially walk on air, but at the cost of two full units of health. 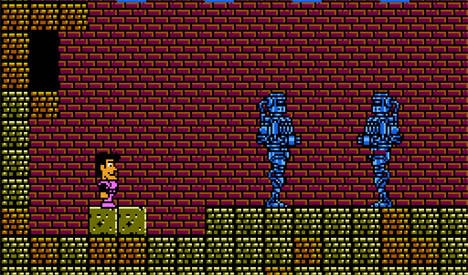 Rad Gravity has quite the menagerie of enemies also. Flying sharks dive-bomb you on Turvia and subterranean ghouls reach through the ground to grab your ankles on Odar. The aluminum foil bats, which reflect your fire and can only be killed by smashing them with your head against a platform above, is one of the most creative monsters I’ve ever seen in a videogame.

Boss fights are creative as well, as most of them require brains more than brawn to defeat. In nearly every instance, the weapons you possess will have no effect on a boss, making them as much puzzles as combat situations. A great example of this are the twin robots on planet Vernia. These clockwork monstrosities march across a platform, firing easily avoided shots, until one of them powers down. At this point, the other robot will proceed to wind them back up unless you can stop it by pushing them back with your weapons. 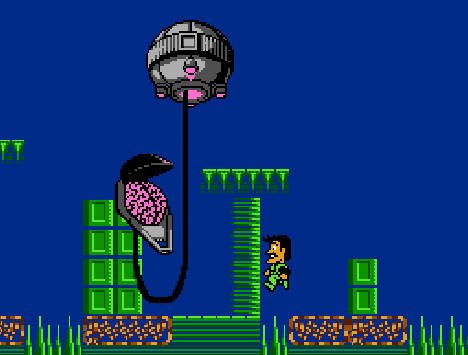 On the whole, The Adventures of Rad Gravity is a really mixed bag. It’s full of clever ideas and has a lot of nice touches to it. But while half of the game delights with its unique design, the other half wants to make you watch while it kills everyone you’ve ever loved. It isn’t just difficult, it’s unreasonably difficult. It’s the game I would point anyone who complains about how hard Mega Man 9 is in the direction of because they don’t realize how good they have it.

In case you were wondering, I did make it to the end of the final stage, though not without the help of the internet. It contains a maze area of identical doors which I defy anybody to survive without the assistance of an FAQ. Finally, I defeated Agathos. Of course, there’s another boss after that which makes him look like Santa Claus. One day, I’ll kill them too.