I bet you thought I was going to write about Mega Man again, eh? Well, admittedly, I was. But then, as I looked through my games at the “M” section, my eye glanced just past my collection of Blue Bomber games and became fixated on Mighty Bomb Jack instead. As if compelled by something larger in the cosmos than myself, I absolutely had to play it right then and there.

I think part of the reason I was so enchanted with this game as a child is that I never really understood it. The instruction manual, long lost, could provide no reference. Not that it would have been much help, as the manual for Mighty Bomb Jack is a testament to the awesome and confusing power of Engrish.

It was a combination of challenge and charm that kept me coming back again and again. That, and having a rather limited selection of games to choose from helped the matter. Now that my supply of entertainments is nigh limitless, I had to wonder if it was worth it to give this old horse another ride. 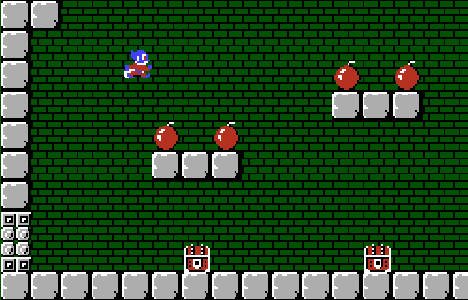 Mighty Bomb Jack is a platformer in which a high-jumping hero in a mask and cape attempts to rescue a royal family from the demon king, “Belzebut.” To do this, he must venture through seventeen areas within a maze-like pyramid filled with treasure and monsters.

Jack only has a couple of moves at his disposal, however. He can jump and, once airborne, drift slowly back down. His jump is extremely high, almost the full height of the screen, and that can cause some difficulty. He’ll always jump the same height regardless of how long you hold the jump button but there are two ways that you can exert some control over it. Holding the d-pad up or down will mildly adjust the height of his jump. Also, tapping the jump button again (thus, sending him into a drift) will stop his ascent cold. 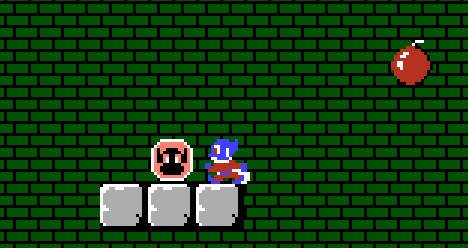 The gameplay, at first glance, appears pretty straightforward. Completing levels is as basic as moving from one end to another and exiting through a door within a time limit. Along the way, you can pick up bombs for points and open chests which contain  point scoring items, time extending elixir and, occasionally, a key which opens a secret door.

The chests also contain “Mighty Coins” which grant Jack special abilities. By using one coin, Jack’s color changes to blue and he can open locked chests. A second coin will turn him orange and allow him to open chests by simply walking into them. A third will change him to green and temporarily transform all enemies into gold coins which can be collected for points. 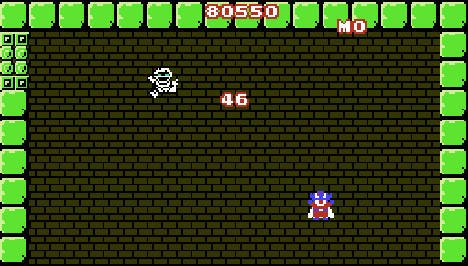 Mighty Coins come with a little risk, however. If at any time Jack holds ten coins, he is cursed for his greed and sent to a torture chamber. There, he must jump fifty times while being beseiged by enemies. Whether he survives or not, he is then warped back to the beginning of the level he was in prior, pockets completely emptied of coins. Jack can also be sent to the torture room if he collects time extensions that cause his limit to exceed 99 seconds.

At the end of every level are “Palace Rooms,” which act both as a bonus room and a boss room. In the Palace Rooms are 24 bombs which Jack must collect to open the exit door. Once the first bomb is collected, a bomb somewhere in the room will have its fuse lit. Collecting lit bombs in the order they appear can result in a massive score bonus at the end of the round.

Palace Rooms also serve the function of a warp zone. If you completely neglect the lit bomb, saving it for the last bomb you collect, you will move on to the next Palace Room instead of progressing to the next level. It’s possible to complete the entire game having only really played the first and last levels in this manner. You must be careful not to die, however, as death results in being sent all the way back to the level where you first entered a Palace Room.

The enemies in this game are as adorable as they are deadly. They all begin their life as mummies that spawn in and walk along platforms. Should they hit the ground (or a certain amount of time elapses), they will evolve at random into one of several other creatures. All of these evolved enemy types fly and have different movement patterns 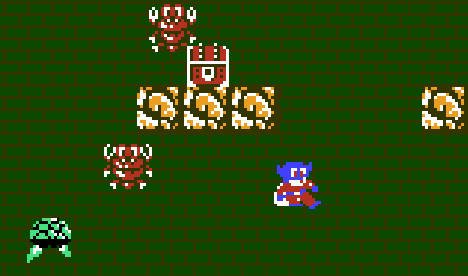 Since the enemy forms that mummies evolve into are completely random and some have more annoying patterns than others, the difficulty of a level can vary somewhat. An area you might have passed through with relative ease can become an absolute nightmare when dealing with different enemies.

Mighty Bomb Jack has the distinction of being one of the first NES games to feature multiple endings. Hidden within the pyramid are two crystal balls. With each one you collect, you’ll have an opportunity to save another member of the royal family in the final stage of the game and earn a different ending. In addition to these, five special coins are strewn throughout the game which, if you have them all at the end, allow you to capture the game’s evil boss and score a fourth ending. 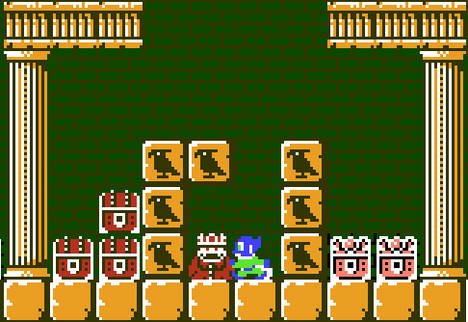 If you can even find them, that is. Many chests in the game, especially ones which open secret doors that lead to these special items, are hidden within blocks. These chests are only revealed when you jump off of the block which obscures it and some blocks require you to do this as many as three times before they unveil the chest. Completing the game with its fourth ending requires an incredible amount of patience and skill.

I have neither of those things in large enough measure to complete Mighty Bomb Jack in its entirety. It’s a cute game and a fun diversion in small doses, but I can’t imagine checking every nook and cranny under the constant risk of instant death to attempt to find everything. If you want a hardcore platforming challenge, this game delivers that, but be prepared for a considerable amount of frustration along the way.