Golden Axe: Beast Rider released today. It would be a lie if I were to suggest that I had any sort of interest in this sequel. The gameplay footage shown so far really does not appeal to me at all, which is disappointing because it is derived from such a classic game and one I played often in arcades.

Although the games have seen several ports, it’s been over ten years since a truly new Golden Axe game of any kind appeared on the scene.1 After Golden Axe: Revenge of Death Adder failed to be ported to anything but arcades (with Sega giving us the forgettable Golden Axe III instead, which never had a release in North America either), the games seemed to just dry up.

I want to be excited for Beast Rider because I’m (admittedly) a retro fanboy. After all, it’s a game that could introduce people who never played a Golden Axe game to some of the world and characters. Maybe a few of them will pick up the Virtual Console or XBLA releases if they enjoy it, creating a whole new fan of retro gaming. These are things that I should be thrilled at the prospect of.

I’m not, but I’m going to try. The best way I know how to do that is to go right back to the game which enchanted me in the first place. Following the jump, I will do just that. 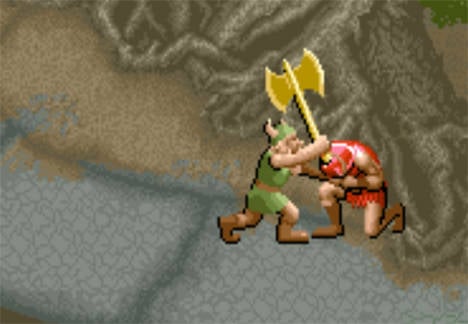 Golden Axe is a straight-up brawler for one or two players. The plot centers around three characters who have had loved ones killed at the hands of the evil dictator, Death Adder. Now, with the king and queen of Yuria captured by the conquering villain, the heroic Ax Battler, Tyris Flare and Gilius Thunderhead will seek vengeance upon him.

The characters are fundamentally the same. Their weapons are different, but one does not appear to be any more or less effective than any other. Each character has a basic weapon combo, a throw move that’s used when close to stunned enemies, a jump attack and a running dash that can end in attack. 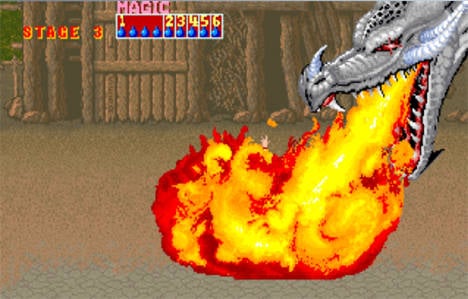 The only actual difference between the three is in their use of magic. All magic in the game affects every enemy on-screen and its potency depends on how many blue magic vials you’ve accumulated before casting the spell. Where the characters differ is in how many of these vials they can hold at one time.

Gilius, the dwarf, uses lightning magic and can only hold three vials at a time. Ax can carry as many as six, giving him four different earth spells in his repertoire. Tyris, the fire user, can hold nine with six spells available as she acquires more. The only disadvantage to her high magic ability is that to reach her second spell requires having five vials. This makes her a little more expensive to use but her highest level spell can instantly kill nearly every enemy. Magic unbalances the three characters and easily makes Tyris the most effective in the game.

Combat is very simplistic. Except for the final boss and one enemy rider, none of the enemies even have a projectile attack to dodge. It all boils down to hacking away at them until they’re dead, with a little bit of dexterity or planning involved when you get surrounded. You will get surrounded almost constantly and the foes don’t follow the kung-fu film mentality of attacking one at a time. It can get a bit tricky at times but it’s never really unmanageable. 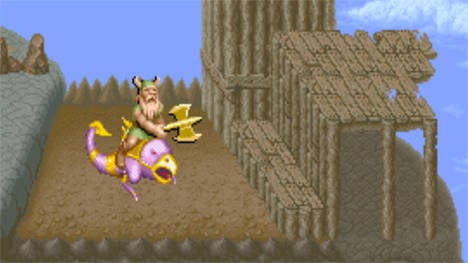 Spicing up the combat are the creatures you can ride. These are like enemy cavalry which you can steal by knocking the enemy off its back and mounting it yourself. The first, a flightless bird with a long tail, is a creature taken directly from Makoto Uchida’s previous game, Altered Beast. The other two beasts you can ride resemble flightless dragons, colored blue and red, who have the abilities to fire a spout of flame on the ground in front of them and expel a fireball across the screen respectively.

These are pretty cool. Enemies can knock you right back off your mount and reclaim it for themselves. If a mount sits for too long unattended, it gets antsy and runs away. It will also dash off after you’ve been knocked off of it too many times. They are fun to ride because there’s some sort of bizarre satisfaction that derives from killing off a dozen or so enemies with a creature called a “Chicken-Leg.” They only appear in a few levels, however, and their charm is short-lived after you’ve fought over possession of them a few times. 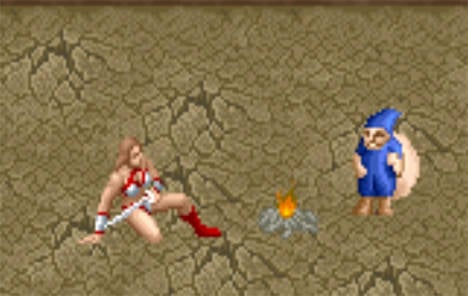 Even numbered levels are a bonus round where the characters are camped out for the night. Blue gnomes arrive and steal two magic vials from each character and scare off any mount you still had at the end of the previous level. In order to get your valuable magic pots back, you’ll have to beat them out of the little blue bastards. In addition to the two they’ve stolen from you, there is an additional two to be had from each gnome. Later levels have green gnomes who supply you with health items when you smack them around.

These bonus levels are not only useful for gaining a little extra magic or scoring some health. In a two-player game, they can be used to exchange magic vials as well. Since the gnomes steal two vials from each player, you could simply have the player who is more proficient at magic collect all of the vials, essentially handing off two from one player to another. It’s an interesting system for allowing players to pass off items in a genre that typically doesn’t allow for it. 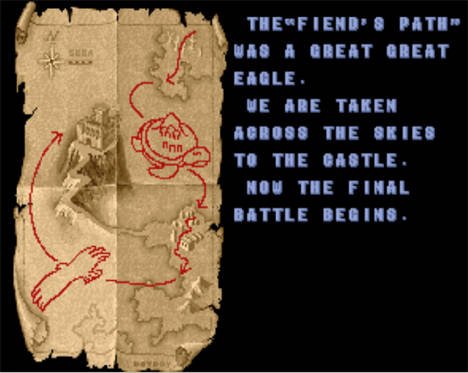 The game contains five levels, when you don’t include the bonus rounds. And the full levels aren’t all that lengthy either. The whole game can be finished in under half an hour, in part due to the brevity of levels and also due to the difficulty. Up until the final boss encounter, Golden Axe isn’t very challenging. The fight with Death Adder is really only difficult because you’re being ganged up on by two or three guys at a time, all of whom take far more hits to kill than most boss enemies. Stand up, get a swing in, get hit by an enemy and knocked down again. Repeat.

In fact, up until that point, I spend seventy-five cents on an average playthrough. Death Adder’s fight can cost me up to two dollars on its own. The only logical reason I can come up with for this drastic imbalance in the challenge level is that the designers figured out too late that, since you’re obviously hooked by this point, they should start making you pay to get your ass kicked. It’s one of the more annoying difficulty curves I’ve encountered because feels like a cheap ploy. 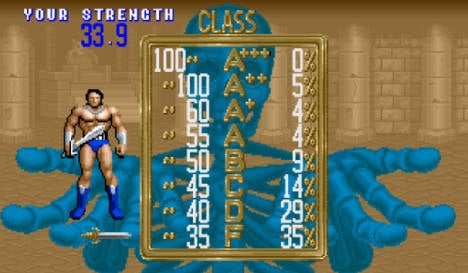 After you’ve finished your game, whether it ends in victory or defeat, you are presented with your score. Golden Axe has a scoring system which uses undisclosed criteria to give you what resembles an academic rating (F through A+++). It’s probably safe to assume you’re being judged on the number of enemies you’ve killed, but there could be some scoring related to how much magic you’ve used or how often you took damage. The number of times in which you’ve died is almost certainly part of the score. The machine will keep track of the high score for each of the three characters.

Golden Axe might be a classic of the genre but, now that I’ve replayed it, I have a hard time understanding why I thought this was a good game. Heroes and villains alike are slow, both in movement and attack. It isn’t that the controls are unresponsive, everybody just moves like they’re covered in mud except for the one spot below their genitals and they don’t want to dirty that up. The sound effects, voice samples in particular2, really feel dated and the graphics are a drab mess.

At one time, it was probably a groundbreaking, amazing game. At least, my memory tells me this is so. I recall the demand for the Sega Genesis port to be a fairly strong system seller in the early days. And while better brawlers already existed, I can’t think of a popular one that sported a fantasy setting before Golden Axe. That said, I would honestly believe the developers of Golden Axe: Beast Riders were they to state that they took the best part of the original game and made a new game focusing on that concept. The beasts are the most fun part of Golden Axe. Sadly, that’s not saying much.

1 There are some people who might argue that the Sega Ages remake of Golden Axe in 2003 would constitute a new game. These people have too much time on their hands.

2 Fun Fact: Several of the digitized voices in Golden Axe were sampled from the films Rambo: First Blood and Conan the Barbarian. These, too, are horribly dated.