In those halcyon days of the early 1990’s, before the MTV machine had infected all other networks with the scourge of reality programming, the channel was really making a push with animated series. Liquid Television, their late-night program of cartoon shorts and general weirdness, spawned several new shows and marked the turning point between being a network that played music videos to becoming a more traditional media outlet.

It was during this golden age where everything at MTV was in balance between original programming and music-content that Beavis and Butt-head rose to prominence. Reviled by parents and politicians, adored by teenagers, this cartoon was a near-perfect blend of slapstick stupidity and subversive commentary.

As Viacom was finding its legs where MTV was concerned, they also took the opportunity to branch into other formats. The Viacom New Media brand started to branch out into videogames and there was no more successful a property to exploit than the metal-loving boys from Highland.

This week, I’m going to take a look at one of the dumbfounded duo’s better forays into gaming. Hit the jump and remember, kids: Beavis and Butt-head are not role models. They’re not even human. They’re cartoons. Some of the things they do could cause a person to get hurt, expelled, arrested, possibly deported. To put it another way: Don’t try this at home. 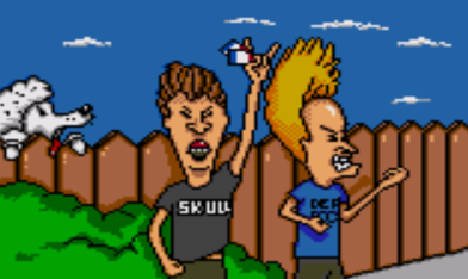 I had a friend who lived around the corner from me while growing up who literally was Beavis, minus the massive underbite. His voice, his interests and his uncanny ability to get himself involved in the most idiotic of circumstances made him a real-life reflection of the cartoon. Obviously, he was a fan and he turned me into one as well. And, when this game came out for the Sega Genesis, we played the hell out of it.

The plot is both simple and completely representative of a standard Beavis and Butt-head storyline. GWAR, the greatest band in the universe, is coming to Highland and the boys have bought their tickets. Unfortunately, said tickets are eaten by Tom Anderson’s dog, who then vomits them in front of the neighbor’s riding mower whereupon they are shredded to bits and cast into the wind. Now, the troublemaking teens must find and reassemble the tickets if they’re to have any hope of making the show.

In order to get the tickets back, they’ll have to travel through notable locations in Highland, such as the high school, drive-in movie theatre, and hospital, solving puzzles. It’s a bit of brawler, a touch of platformer and a dash of adventure gaming. Some levels will have you jumping to avoid obstacles and others merely need you to think like a hormonally charged teenager with Attention Deficit Disorder. 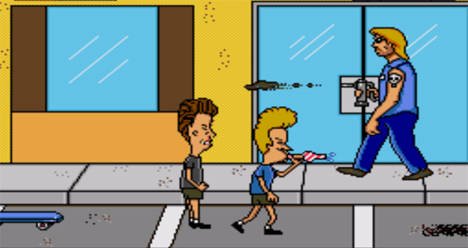 Controlling the pair is simple enough, with a button each for running and jumping, while the attack button works double-duty as use/interact. There are four weapons available to stave off the various enemies, ranging from the expulsion of noxious gases to a semi-automatic dart gun and Butt-head’s “Frog Baseball” bat. You can switch characters at any time in the pause screen or have a friend become your partner in crime.

Levels are crawling with baddies intent on stopping the pair. Mall security guards, concert bouncers and the rebellious Todd can be defeated, but many other smaller enemies cannot. In addition, shopping carts and bowling balls inexplicably race across the floor and must be avoided.

Combat is a challenge for a few reasons. Enemies that can actually be killed take many hits to defeat at long range and are pretty much guaranteed to hit you once or twice at short range. Beavis and Butt-head don’t have a lot of health and can be taken down in just a few hits and most items that restore it must be earned by killing enemies. They don’t share a life bar, thankfully, but this ultimately serves to make playing the game in co-op nearly impossible since it’s all over if one of the characters goes down.

And that’s my biggest complaint about this game. While a lot of it isn’t obscenely difficult, only having one life and a pretty low availability of health items can make what would be a pretty fun game really frustrating to a newcomer. There’s no “continue” option either, as death brings you back to the boys’ house in just the state you were in when you started. There is a password feature that will restore what you had last time you checked, but it’s one of those annoying ones with difficult to discern upper and lower-case letters and numbers. 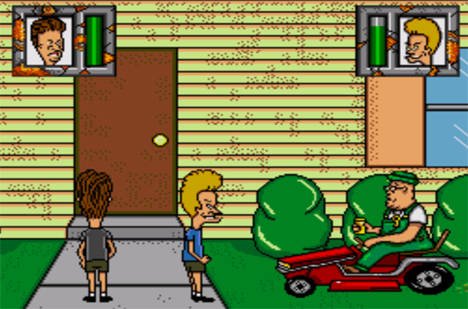 Many of the puzzles are cribbed from events depicted in the TV show, which is fine because they’ve picked some of the better ones. You’ll cut down Mr. Anderson’s tree using his stolen chainsaw, take photos of a rockin’ van and serve french fried rat at Burger World.

The problem is that several of them, while they make sense once solved, are things that a rational person would probably not attempt. And, apart from a few instances where you attempt to sell something you’ll actually need or snare one of the two friendly characters by couch fishing, there isn’t much in the way of in-game assistance. 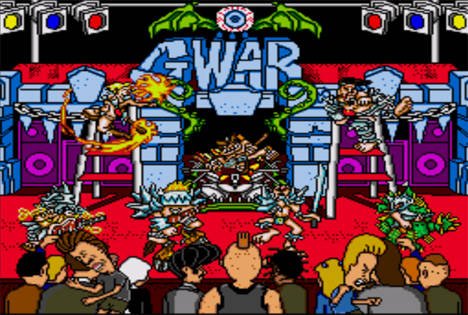 From a audio and video perspective, the game does what it needs to. It’s not exactly as if the cartoon series had a high bar in terms of appearance, and the crudely-drawn style of Mike Judge’s work translates pretty well even at the 16-bit level. Everyone looks the way they should.

The sound effects are quite good too, and features a fair bit of digitized voice acting from Judge. It might annoy some players to repeatedly hear Beavis say, “change it,” or Butt-head proclaiming, “we’re there dude.” If that sort of thing would annoy you, however, you probably weren’t thinking about playing this game in the first place anyway.And it’s totally worth the effort to grab a piece of the tickets and hear the paid imitate the original MTV theme song soundbyte from the old moonman commercial.

Music, on the other hand, is pretty ho-hum.  It’s just an arrangement of generic “metal” tunes without a lot of flair. It all fades into the background pretty well, though, so I can’t say too many horrible things about it. Redeeming the soundtrack, however, is a MIDI-tastic version of my favorite GWAR song, “Jack the World,” found in the final level. So good. 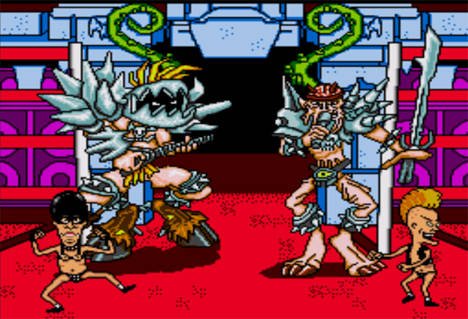 Much like the TV series that spawned it, Beavis and Butt-head is best when experienced in small doses. Clever at times, maddening at others, it’s something I wouldn’t mind picking up once every few months or so and giving another go at. Plus, seeing GWAR at the end of a long day is always a treat.