Batman is the greatest comic hero ever. Any suggestion otherwise may result in a ninja stealing your breath in the night. With a new Batman film coming on Friday, I thought it would be appropriate to take a look back at an adaptation of an earlier movie in the series.

It was 1989 and the world was caught in the fierce grip of Bat-mania. You couldn’t turn your head without seeing the logo at the very least. I was no exception and I managed to coerce my parental units to invest in all manner of merchandise. I had Batman headware, Batman footwear, even the soundtrack by Prince (an album so riddled with innuendo, no right-minded adult would allow a child to hear it; it remains one of my favorites today).

And what would a summer blockbuster be without a videogame tie-in to squeeze that little bit of extra cash from kids? Sunsoft answered the call and released Batman for the NES six months after the film release. Now, we all know how films translate into games but I recall this being a really entertaining one despite my general reticence toward such things. I guess we can find out together when you hit the jump. 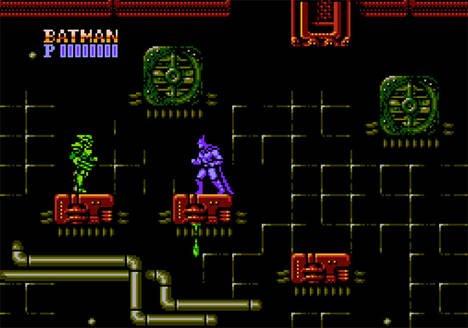 Batman is a side-scrolling platformer where you control the Dark Knight as he battles, blasts and batarangs his way through twelve stages and six boss fights. There are roughly a dozen different enemies to contend with using fists and three special attacks.

The story of the game attempts to mirror that of the Tim Burton film. It seems as though nobody at Sunsoft saw much more than a few publicity stills and select action sequences because the plot presentation is quite jumbled. Cutscenes between levels do not, in any way, reflect the progression of the film’s storyline and the intro offers a vastly different story where Joker rules over a largely deserted Gotham City. Then again, it isn’t really any further off from the film as the film is from the comic books.

Also, just like the movie, the story doesn’t matter. This game is about action and excellent level design. Locales in the game are similar to the film, going to places like Axis Chemical and Gotham Cathedral, and many levels offer multiple paths through them. They make great use of Batman’s admittedly limited abilities (he can attack, jump and wall-jump but that’s about all) to provide challenges that are almost puzzle-like in nature. Practically every obstacle can be overcome without taking damage if you can find the best route and have accurate timing and control of jumps. 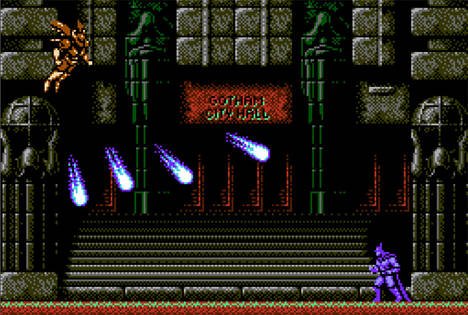 At the end of each of the game’s five areas you’ll encounter a boss character. After the challenge of the level before it, these often seem a little disappointing. They look really cool but, provided that you have most of your health remaining, they’re easy to defeat once you’ve found their pattern.

The graphics are pretty damn good for the hardware, with detailed (sometimes animated) backgrounds and some very impressive animations. One of the reasons that I never really got frustrated when dying in Batman is the badass death animation. Check this out:

He bursts into flame which then forms the Batman logo! How could I possibly remain angry in the face of such awesome?! The music is great too, with a rockin’ soundtrack that sounds almost as good as early Castlevania tunes.
I do have a few problems with the game, most notably with the hit detection. I’m not talking about an opponent, as that works really well. The issue comes in with enemies hitting you but not always dealing their damage. This sounds like it would be a benefit but it’s really confusing, especially up against boss enemies. An attack might not deal damage to you the first or even third time it happens and lead you to believe that you’re evading something before it slams you for some damage.
Controls are another, albeit minor annoyance. I’ll never understand why not every company adhered to the standard set by Nintendo in regards to what button pauses the game. Batman is an example of a game that does this and it drives me nuts. Pressing “Start” switches Batman’s form of attack to his Batarangs, a rocket or a shot which breaks into a spread of three. Which means that select pauses. Well, if I accidentally hit start in an attempt to pause, I’ll then have to cycle through all the weapons to get back to the one I wanted to use. It might sound like a little thing to you but I really hate that. 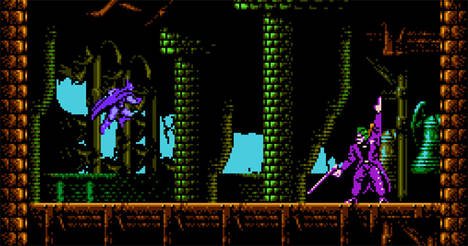 Oh, and remember what I said about the boss fights being a piece of cake? The Joker is the exception and one of the worst bosses I can remember in a long time. He has an attack that is very hard to avoid and deals four damage while no other attack in the game does more than one. That’s half of Batman’s life bar gone in a single move. Then he’s completely unpredictable with three different attacks and no pattern or warning whatsoever. Even with an infinite lives cheat (to prevent having to complete the previous platforming level again) and infinite ammo, I can’t beat this son of a bitch. Completing Batman seems to be a combination of getting to the one safe place (which moves) and praying to whatever deity you hold faith in.
Even if I’ll never finish the game, I enjoy going through the platform levels so much that my failure to complete it doesn’t bother me one bit. From the timing to the strategy you have to employ in getting from one end of a level to the other, it remains fun and challenging play after play. 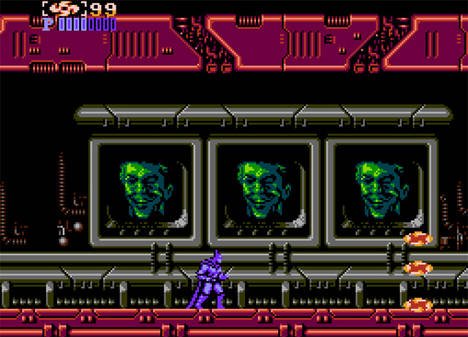 Movie-licensed games are so consistently poor, such obvious cash-grabs, that we often outright ignore them now. Every once in a while, however, somebody will actually go to some real effort to produce a quality game that just happens to be based on a film. Batman for the NES is one of those games.