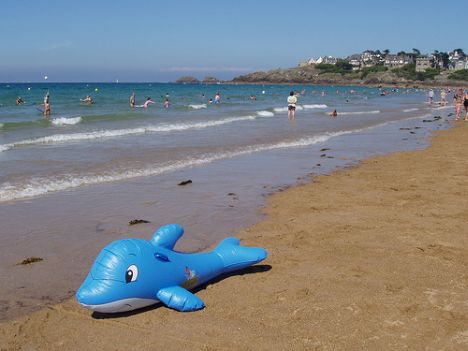 While summer vacation rolls on here in paradise, I find that even the calming effect of laying in the sun still doesn’t erase the world of retro gaming from my mind. It may be because despite our divine surroundings, Anthony Burch continues to 1. Wear all black to the beach every day and 2. Complain about how he hates the Earth’s beauty until I want to sever his head from his spine with a beach umbrella. Really, that volcano battle can’t come soon enough.

Hit the jump for your weekly report, live from the beach.

Chad’s Undersea Adventures (and Virtual Console reviews)
Ouch. Ouch. Ouch. Ouch.
I apologize in advance if there are any typos in this post. I am so sunburned even my fingers are lobster red. I am not naming any names, but someone accidentally rubbed my entire body with cooking oil instead of suntan lotion. Here’s a hint: his name rhymes with Bopher Bantler. That’s all I’m sayin’.
Ouch.
Guess what? Another week with only one Virtual Console release. I get it, Nintendo: you love WiiWare and want to focus on that for awhile and are ignoring the Virtual Console. That’s fine. I respect that. Just don’t be surprised if a wave of hot laser love comes your way care of that (handsome) painting of me that is hanging above your cubicles.

The sole game this week is Samurai Shodown (900 Wii points) for the Neo-Geo. Now, I love this classic 2D fighting game — it was the main reason I was excited about Neo-Geo games on the VC in the first place – but, just like Metal Slug, a huge compilation of all the Samurai Shodown games is coming out for the Wii in just a few weeks. Because of this, I can’t recommend paying $9 for a download of the first (amazing!) game when you can get all seven of them for only ten bucks more.
It’s a great game, though, and if you download it on the Virtual Console, you won’t be disappointed. It just might be a waste of money considering the epic alternative that will be out next month.
Since it is the summer and I am feeling generous: three out of five dolphins.
Ouch.

For the love of God, I hated this game. When I wrote about it last Monday I thought I was going to enjoy it, but I was more infinitely wrong than I possibly could have foreseen. You play Cocoto, the little red devil guy on the left. You basically sail around in your boat, catch fish, and complete tasks to get better equipment and bait, etc. The art style looked cute, so I thought, hey, might be fun. WRONG. Awkward controls and muddy looking graphics make Cocoto a definte pass. Sorry, junior fishermen.
Block Breaker Deluxe (800 Wii points)
Not one, but two less-than-ideal releases this week from WiiWare. I have to admit, my once-high hopes are diminishing rapidly. Block Breaker Deluxe is a perfectly fine puzzle game with Pong-style ball bouncing, but it felt a little generic to me. If you don’t have any puzzle games downloaded yet, you might have fun with it, but I found it kind of average. It also occupies 238 blocks of your very limited Wii storage space, so you may want to consider that if you download it.

Topher just ate an entire box of freezy pops.
Elements of Destruction (800 MS points)
You know, I’m not sure why I bother listing the prices of XBLA games in these posts. Is it ever not 800 points? Anyway, Exxon Mobilsoft’s first offering this week is Elements of Destruction. I was sort of looking forward to this one when I first heard about it. The prospect of using nature’s finest bitchslaps to destroy buildings and otherwise ruin people’s day sounded like fun.
Too bad it’s not. At all.
I’m no meteorologist, but I’m pretty sure a farmhouse caught in a tornado shouldn’t look the same as a farmhouse being rocked by an earthquake. It seems no matter which element you choose, they all kinda just shake the controller and make your target catch fire. I dunno, maybe it’s me. Maybe I should have paid more attention during the week I spent at weatherman camp instead of ditching class to catch turtles.
Sea Life Safari (800 MS points. Duh.)
I’m still pissed about that weather game. I wanted to fling cows across the screen with a tornado or jolt the shit out of a few unfortunate swimmers witha bolt of lightning. Anyway, onward. Sealife Safari is an unlicensed version of Pokémon Snap. There, I said it. If you let Professor Oak make you his camera lackey back in the N64 days, you’ve already played this game. Only now it’s fish. Which, shockingly, are much less fun to take pictures of than Pokémon. The game does have its moments — giant crab sightings and the like — but it’s nothing to get too excited about. If you have kids who are really into fish, they’d probably dig it. Actually, let’s go that route again this time. Your kids could possibly have a lot of fun with this game. You? Not so much.
This week’s XBLA titles both deserve points for originality, but not the kind of points you spend. And certainly not 800 of them.

Dyson’s (Not) Download Days of Summer
Welcome back, folks. Has the summer been treating you kindly so far? As always, I hope that you guys are having as much awesome apocalypse as you can handle. If you’re not, then allow to Dyson to step in and recommend another title for you to Not download in those not so awesome moments. This week’s title is Konami’s only US Pop ‘n Twinbee release for the NES, Stinger.

While the title doesn’t come close the insane difficulty level of Konami’s Gradius, it does provide a traditional retro learning curve. Basically, you will die a lot until you figure out the game’s “rhythm.” This dying won’t be frustrating, though, because along with switching between being a horizontal and vertical shooter every other level, the goofy and original enemies that they throw at you are hilariously entertaining (Oh noes! I’m being attacked by clothes hangers!)

Speaking of enemies, my favorite thing about this game is that when you beat the last boss, the game restarts again and all the enemies in every level are now new. Some of them even being mini versions of the bosses from the first play through.

To beat these enemies, and the game, the power-ups you gain are determined by shooting bells that pop out of the clouds and keeping them in the air long enough to get them a certain color. Obviously, the longer they’re being held up, the stronger the power-up.

This leads me to my only complaint about the game. Like a true OG Konami shooter, once you get killed and lose your power-ups, you’re fucked — especially on the last level. The enemies come at you so quickly that trying to regain all the badass-ness that you had before is close to impossible (may I Not suggest a Not save state, wink wink), and trying to move your ship without its speed boost is like trying to drive a tank with a tent attached to it through a wind storm that happens to be in the bottom of sand pit — in reverse.

Regardless, with today’s Not advances in Not emulation, this game is a perfect addition to your daily and easy to digest dose of awesomesauce.  Go get.

The portable Rev Rant
I HATE THIS.
—–
Hope you enjoyed this week’s RetroforceFAUX!, guys — I’m off to rub Aloe Vera on poor, injured Chad and his glowing red bum. See you next week!