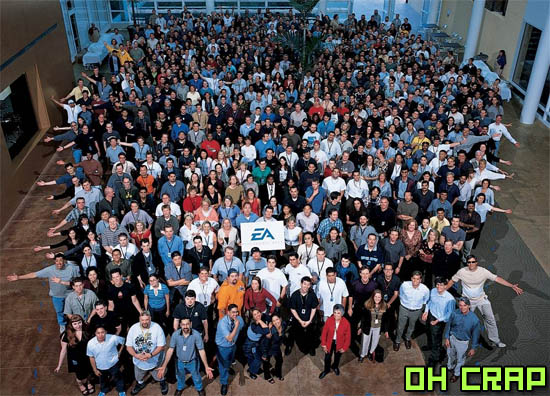 Owing to sagging profits and and a less-than-firm grip on their once invulnerable spot at top of the third party heap, Electronic Arts is looking to make some changes in their corporate structure, starting with Mythic and their Redwood Shores studio. An internal email from a trustworthy source who wishes to remain anonymous reveals that John Riccitiello, CEO of Electronic Arts, has tasked every studio and company within the monolithic publisher with getting their rising costs in line with revenue, which in plain English means layoffs.

The email from Mythic VP Rob Denton was sent to all employees of Mythic and details some of the plans to reduce costs by cutting jobs as well as some actions already taken. Headcount will be managed through “attrition, performance management, stricter hiring guidelines and layoffs”. Over the next two months, the Ultima Online team will be moving from EA Redwood Shores to Mythic’s Fairfax, VA studio to streamline operations. Meanwhile, a number of employees at both studios have already been let go as of earlier today including many UO staffers, with more to follow as EA tightens its belt in the coming months.

While this is the first we’ve heard directly of the layoffs, increasing efficiency and lowering costs in the face of falling profit margins and flat revenue can’t be achieved by just two of over 20 studios. While we were asked not to print the email in its entirety, one direct quote from the email we can show you is the following:

Given this, John Riccitiello, our CEO, has tasked the company to get its costs in line with revenues … Every studio, group and division of the company has been tasked to review its overall headcount and adjust its organization to meet the needs of the business moving forward.

Such an order coming from the top likely means some far-reaching consequences within the company. Destructoid will keep you posted on any further updates.