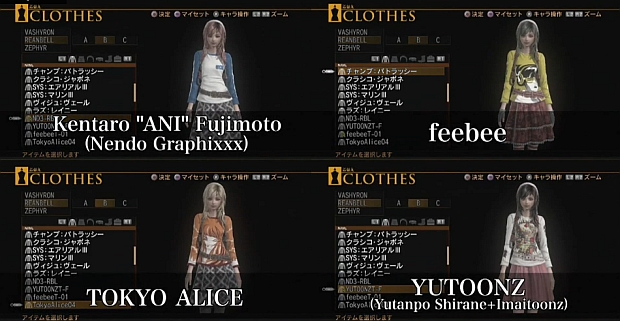 It might be telling that the first time I heard of tri-Ace’s newest RPG was when it had its name changed from End of Eternity to Resonance of Fate for the international release. It was strange to me at the time since both names were in English and made about the same amount of sense, but I shrugged it off and went on with my life. With this new uber-trailer out in the wild though, I’m thinking that I might have to pay more attention, because the game looks goddamn nuts.

Though the opening premise and stereotypes aren’t blindingly new, I’m digging the decision to skip the 16th century and move into a more industrial-age aesthetic. That opens the field for slightly less ridiculous character designs, and tri-Ace has recruited actual fashion artists to help tart up the cast with a wide variety of customizable clothing options. Better still, all the cutscenes are rendered in-engine, enhancing the drama with leopard-print jackets and t-shirts bearing incomprehensible Engrish slogans.

The gunplay-based battle system also looks intriguing, involving free movement in a quasi-real-time setup. Once selected, characters move and attack freely. However, players can opt to set up a waypointed path around enemies, which allows access to “invincible attacks,” basically stunt jumps that send characters flying through the air, firing their guns in ways that even John Woo or Michael Bay would call “too crazy to work.” From the video and details released so far it strikes me as a mixture of Valkyria Chronicles, Star Ocean, and the enemy-juggling mechanics from Super Robot Taisen OG Saga.

The game will also be introducing two very overdue features, namely the ability to retry any battle and save anywhere.

In any case, check out the trailer below. Feel free to skip to about 2:30, which is when stuff starts happening. What do you think? Am I being overoptimistic? I don’t own a 360, and as such haven’t played the majority of tri-Ace’s JRPG releases this generation.