Housemarque’s latest, announced at this week’s PlayStation press conference at gamescom, is PS4 title Resogun. Any fan of Super Stardust HD or Super Stardust Delta would be glad to hear that this game is a spiritual successor, though it adds some new ideas and some next-gen shine to the formula.

It’s a shooter at heart, reminding of Defender, though it’s not as space-y as you’re fending off alien invaders in an attempt to save the last humans. Resogun plays cylindrically, with free back-and-forth movement. It’s fast, but it’s not so fast that you’re overwhelmed. The left analog stick controls movement while the right one fires either forward or back. And aside from a few buttons for special attacks, that’s all you really need to know to jump in and have fun. 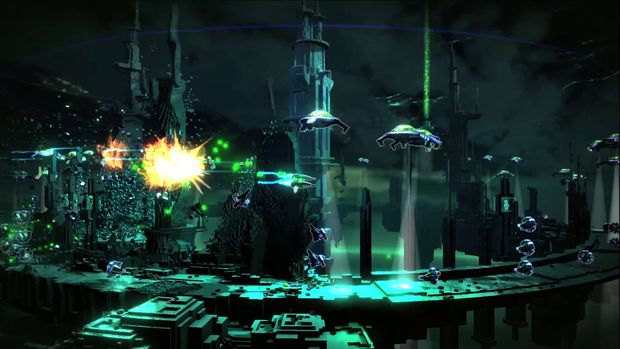 Resogun looks great with its sharp edges and its eye popping lighting effects. One of the coolest visual aspects is that the game’s world is made up of little cubes. Its fully destructible environment has stray fire busting up walls and flooring. They all do this neat thing where they kind of disintegrate and fall downward. And as you progress through each level, you’re actually slowly destroying this world, bit by bit. If you manage to beat the boss the entire world blows up into little cubes. Housemarque says that the game’s engine is capable of displaying 500,000 on screen at any time, in full HD at 60 frames per second. They’re already working the PS4 hard.

There’s this nice feeling of accessibility even with all of the bullets flying anywhere. If you’re well-versed in shmups, you’ll do fine. But if not, there’s still hope for you. Some guidance I received after dying a few times had me relying on a refillable forward boost. This move adds temporary invincibility, letting you get out of messes a bit easier. This combined with spread bombs worked as training wheels until I got a good feeling of the game’s movement. 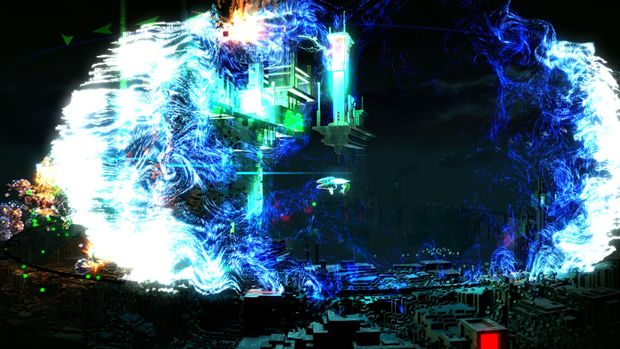 Once I got that down, I fell into this pleasant, focused trance. After a clean series of dodges, close calls, well-timed boosts, and clean back shots, I was grinning ear to ear. My score multiplier was climbing and I felt powerful. But just as I got cocky, the game ramped up with several different kinds of attackers, coming from all directions. The trance faded a bit, though I still was having a blast. 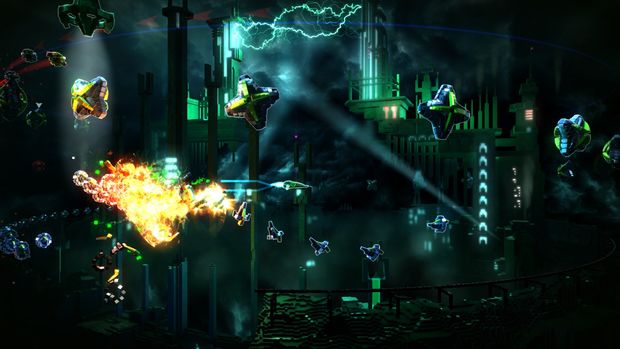 Resogun throws a small twist in to keep things interesting. One of the control labels has a funny name: “Throw Human.” It turns out that you’ll look for “the last humans” alive and pick them up. They flail and dangle behind your ship until you can manage to safely take them to transport points. If you happen to be boosting by a transport point, you can actually throw the human in the proper direction. Properly transporting humans away from alien invaders will give you power-ups and other benefits.

It seems they’re still sitting on some details for Resogun. Perhaps co-op play? We’ll have to wait and see.

I was pleased to learn that a title with such great gameplay will be available at launch. Better, it’s free with PlayStation Plus.