With a relatively thin PlayStation 3 launch line-up, Resistance: Fall of Man was a saving grace for early adopters. Almost six years later, the Resistance franchise has gone on to be a critical mainstay for Sony’s systems. With Insomniac no longer at the helm, the Resistance franchise continues under Sony’s stewardship. Resistance: Burning Skies is the first big test to see if the series can go on without its original auteur.

From what I’ve seen recently, yes, it most definitely can. Burning Skies maintains what makes Resistance, well, Resistance. Crazy guns and a heavy, desolate atmosphere are all as present in Burning Skies as in past entries. The multiplayer did leave something to be desired, but the total package is shaping up to be a real treat for fans. 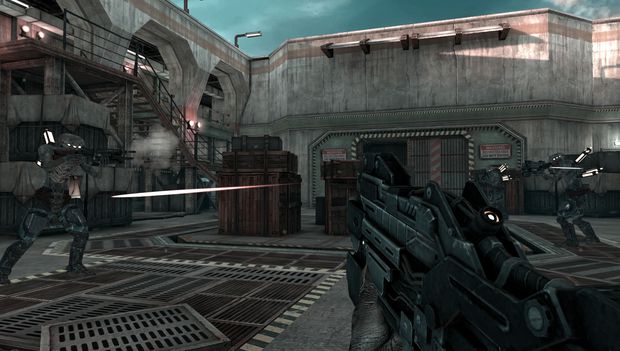 Burning Skies puts players in the boots of Tom Riley, a firefighter on a mission to protect his wife and daughter during the Chimeran invasion. Taking place between Fall of Man and Resistance 2, Burning Skies’ story is set during the first three days of the Chimeran blitz. Although Europe has all but fallen, until the Chimera show up, America is still living in its Norman Rockwell ideal. Whereas past games in the series have always placed players in the thick of the conflict, Burning Skies aims to lead players through the transition of day-to-day 1950s America to the war-torn hell hole it becomes as the Chimera bum rush the Eastern seaboard.

With their big push, the Chimera bring along a few new enemy types. There weren’t a whole lot of new enemies shown in this demo, but there will be new breeds of Chimeran infantry and boss monsters mixed in with the series’ mainstays. In my time with the game, I was reacquainted with old friends like the Executioner, LongLegs, and the good old Hybrid. Joining the series is the Impaler, a melee-focused enemy who loves to rush and, as the name implies, impale people.

The dreary setup is in place, but Burning Skies couldn’t be a Resistance game without some crazy weapons. All the tried-and-true classics are back such as the Auger, the Bullseye, and the Carbine, but a few new toys enter the fray. The standout new weapon I saw was a shotgun/crossbow hybrid called the Mule. A beast at close and medium range, this two-shot double-barrel weapon lays out any enemy like a good shotgun should. Its secondary function shoots explosive crossbow bolts over long and medium ranges. Apart from being incredibly fun to use, the Mule also shows off the design philosophy behind the new human weapons.

Speaking with Nihilistic’s Robert Huebner, the Mule and other weapons were “meant to have this home brew feel to them.” Acquired early in the game, you get the Mule from a bartender who’s just attached a crossbow to a shotgun so he could protect his home and business. It’s these smaller details that go to sell the desperation of the people you encounter during the story.

Not be outdone by the opposition, the Chimera bring some new guns as well. The one we got our hands on was the Sixeye, a burst-fire sniper rifle that shoots remote charges as its secondary function. Setting and detonating the charges both use the Vita’s touch screen, as do all the secondary fires. To make up for the fewer buttons on the Vita versus a PS3 controller, Nihilistic has mapped a great deal of Burning Skies’ controls to the touch screen and back pad.

To put up an Auger shield, for instance, you place your thumbs on the center of the screen and swipe them away from each other. Or if you want to tag a target with the Bullseye, just tap on screen which target you want marked. Melee and grenades both have their own onscreen icons that you tap to use, and sprinting is done by tapping on the rear pad. 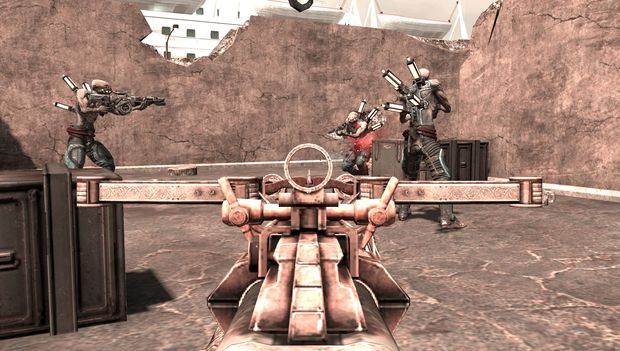 As you can see, there is a ton of functionality tied to the touch controls. Thankfully, it all works well. While there is some initial awkwardness to overcome, once you get accustomed to the controls everything works incredibly smoothly. In fact, it’s because there is so much touch functionality that it all works so well. Constantly having to use it for even the most basic mechanics makes it feel all the more normal.

All told, the single-player looks to be in great shape, but what about the multiplayer? In a word, slim. Burning Skies will ship with a decent six maps, but will only come with three modes — two of them being Deathmatch and Team Deathmatch — with support for up to eight players over a Wi-Fi (no ad hoc support) connection. In our demo, we got a look at two of the game’s six maps, playing Deathmatch and Survival mode.

Deathmatch in Burning Skies is as straightforward as you would imagine. It’s a free-for-all race to the top as you try to get the most kills before everyone else. Survival mode pits two Chimeran players against six human players to see how many members of the latter group can survive before time is up. Every kill that a Chimeran player gets infects the human and respawns them as another Chimera. It’s a fun diversion, but like similar modes (such as Halo‘s Living Dead), it’s over quickly. 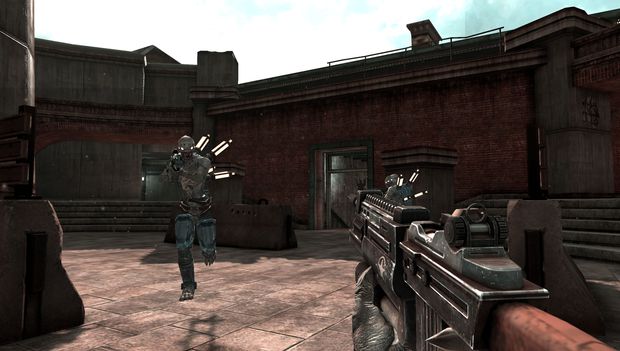 The meat of the multiplayer, then, is in its leveling system. It works pretty much how you would expect: you earn XP for completing challenges, getting kills, assists, ending another player’s kill streak (which is even called buzz kill), etc. You unlock new weapons and upgrades (essentially perks) to improve your weapons until you hit the level cap of 40. One cool feature is Burning Skies’ Infection system. As you play games, you can get get XP boosts, called infections, from other players. The way the boosts works is that you get a set multiplier for a predetermined amount of time.

Values of infections range from getting 1.5x more XP for a few games, to getting a 10x boost for a whole weekend. It’s a rather ingenious incentive to keep people playing. You can also pass infections to other players either in-game or with the Vita’s Near functionality. Depending on how long the community lasts — and with so many ways to spread them — infections could travel far, like herpes. Unlike herpes, though, you can choose which infections to keep and which to throw away, ensuring you can discard lower-level infections in favor of higher ones.

With about a month until release, Resistance: Burning Skies looks to be in good shape to set the Vita ablaze. The multiplayer can feel anemic, especially when it comes to modes, but what’s been shown of the single-player has been simply awesome. Whether you love first-person shooters or not, Burning Skies is one title any Vita owner cannot afford to let slip under their radar.