Built in conjunction with help from Insomniac Games, the developer is calling it a “no compromises first-person shooter experience.” The title puts players in the turnout coat of New York City firefighter Tom Reilly, set before the events of Resistance 2, just as the Chimera are invading the East Coast of the United States for the first time. The story is being written by science fiction author William C. Dietz, whose previous work includes penning the Halo: The Flood novel. 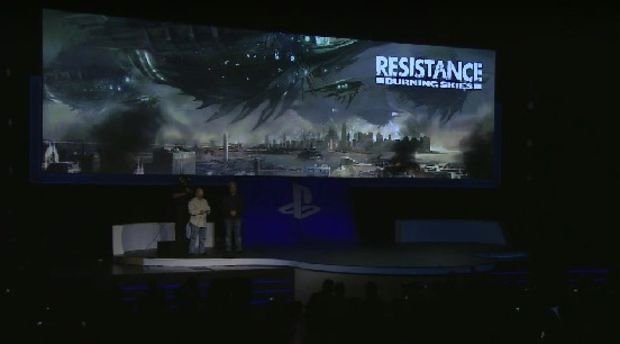 Of course, with the PS Vita’s dual analog sticks, first-person shooters are more playable than ever on the go. But Nihilistic intends on using the touch screen for functionality, as well. The touch screen was used to demonstrate one of the game’s new weapons, the Cluster Fire Gun. By tapping and “painting” targets on the screen, you’ll then be able to fire off home rockets. Other touch screen functionality included quick use of a melee weapon (a fire axe), as well as navigation of the game’s weapon wheel.

Burning Skies also introduces a new cover system. To take cover, players need to simply crouch behind objects, the game locking them into place. You’ll then be able to peek from cover by using SIXAXIS controls (tilting the Vita itself), by simply targeting with iron sights, or firing.

Resistance: Burning Skies will be playable at gamesom, so we hope to have more details soon.