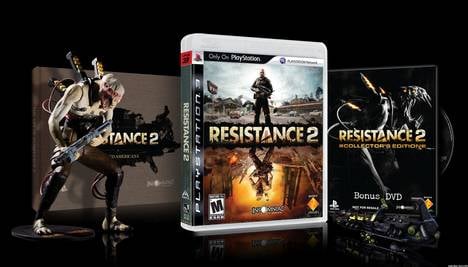 Sony has officially announced that Insomniac’s PlayStation 3 exclusive Resistance 2 will be dropping on shelves November 4 (two days before my birthday … hint, hint!). In addition to the standard flavor, the pre-requisite collector’s edition will also be available for $79.99 and will include:

Sony has also (once again) revealed the ways you can gain “premiere access” to the public beta: pre-order the game from GameStop (retail or online) or purchase an annual subscription to the PS3 digital magazine, Qore. If patience is your personal virtue, you’ll also have a chance to apply for the public beta after the “premiere access” period by applying online. Additionally, you can just pick up Qore Episode 03 for guaranteed access.

Penny Arcade Expo attendees had their chance to go hands on with Resistance 2‘s multiplayer this past weekend, and as most of them would tell you, it’s shaping up to “totally rock.” While I’m not a huge fan of collector’s editions — regardless of how packed with awesome they are — it’s nice to see Sony/Insomniac giving gamers a million ways to play the beta before they pay.

FOSTER CITY, Calif., Sept. 2 /PRNewswire/ — Sony Computer Entertainment America Inc. (SCEA) announced today that Resistance 2(TM), from independent developer Insomniac Games, will release in North America on November 4 and will be offered in a special collector’s edition while supplies last.  The collector’s edition for Resistance 2, the highly-anticipated follow-up to the best-selling PLAYSTATION(R)3 computer entertainment system (PS3(TM) system) launch title, Resistance: Fall of Man(R), will be available for a suggested retail price of $79.99 at participating retailers with the following premium items included:

Gamers eagerly awaiting the game’s launch this November will have an opportunity to get an early look at Resistance 2 as SCEA also announced today a worldwide competitive online multiplayer and co-operative beta beginning in early October.  Powered by the PLAYSTATION(R)Network, the Resistance 2 multiplayer and co-operative beta will provide PS3 owners with an opportunity to experience new levels, modes and weapons.

“Resistance 2 is Insomniac’s most ambitious game yet.  The team’s goals from the onset have been to heighten the online experience and encourage experienced and novice players to jump online,” said Ted Price, President & CEO, Insomniac Games.  “With an eight-player, co-op campaign and 60-player squad-based competitive multiplayer, Resistance 2 offers players a complete online experience on a scale like no other.  We really value the feedback of the Resistance community and are excited to open the beta and provide our dedicated fan base an early look at Resistance 2’s multiplayer features.”

The Resistance 2 Public Beta program will be available through both premier and open access.  Premier access provides players with guaranteed access to the entirety of the Public Beta period through programs including:

For open access, players will have the chance to apply, and if selected, play the Public Beta after the premier access period.  Those that are interested in joining the Public Beta can submit their information at https://beta.myresistance.net/apply.  In addition, players who purchased Qore Episode 03 (single Episode) will be guaranteed access to the Public Beta.