And, Moira’s really awkward at swearing

My time with Resident Evil: Revelations 2 at Tokyo Game Show was brief — maybe 20 minutes if we’re being generous. Swiftly dumped into the beginning of the game, I was left to try to unravel the mystery of what exactly was happening, an inquiry that went unsolved. It was predictable, though. There’s a lot of story to tell over Revelations 2‘s month-long release of four installments in early 2015; they’re not going to clue me in right from the get-go.

What I do know is that I woke up in a jail cell as Claire Redfield, the action protagonist of Revelations 2. She handles all the shooty/stabby parts, and her cohort Moira Burton handles all the investigation bits. Moira was similarly imprisoned close by, until I used Claire to free her. From then on, the two could be switched on-the-fly with a simple press of a button.

Seeing as it was the beginning of the game, this is where Revelations 2 did its best to acclimate players with the simpler mechanics. Here’s a knife, stab stuff with it; here’s a gun, it’s used for shooting bad people. That sort of thing. After teaching me how to push shelving, a zombie burst through the other side, imploring me to punch him with my knife in his big dumb face. 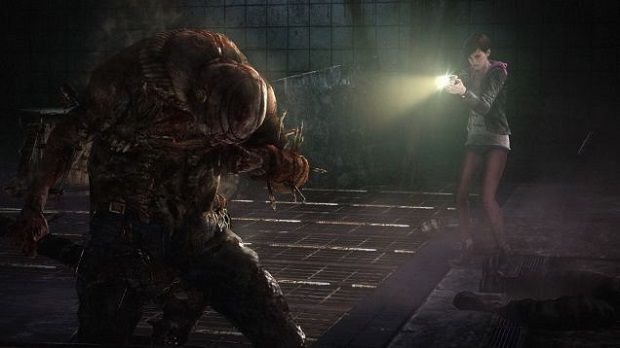 After enemy numero uno had been dealt with, Moira tapped into her inquisitive side and questioned “What the COCK did I just see?” She’s kind of awkward at cursing. Just a bit earlier, she outwardly said that she “didn’t give a moist barrel of fucks.” Maybe she’ll grow into it; she’s still young, after all.

As the girls traversed the overrun scientific facility (that had jail cells, for some reason), Claire keenly observed that it’s sort of a dangerous place. She tried giving Moira a gun, who firmly declined and declared that she “won’t hold a gun again, not after what happened.” Okay then. However, she’s comfortable holding a flashlight, so she’s relegated to light duty and spotting resources for Claire to pick up.

Along the way, I found a gem tucked inside a desk that obviously acted as some sort of currency. I asked PR what purpose that served, to which I was given the response “we’re not talking about that yet.” Of course. However, Capcom alluded to the fact that it’d be used to purchase “character-related stuff.” That’s better than nothing, I guess.

Continuing forward, Revelations 2 made the executive decision to throw a whole lot more enemies at me. This was a bit of a problem, because it also puts an emphasis on resource management, meaning that I needed to make every shot count. That’s easier to do than I initially figured, because Revelations 2 actually controls decently. That’s not always the case in survival horror games.

However, control competence aside, I still managed to find myself in quite the snafu. With three aggressors and not nearly enough bullets (the knife doesn’t do a whole lot of damage), I had trouble either fighting them or running away (those bastards can climb ladders faster than I can). With a fortunate combination of dodging, healing, and finding more ammo, I eventually cleared the room, but in critical condition.

I didn’t want to continue. I knew one of these dudes was going to jump out, scare me, and then kill me. Cautiously, I proceeded, knowing that my fate was all but sealed. Turns out I was wrong. The demo ended shortly thereafter, as the two ladies questioned what the deal was with the glowing green bracelets they were wearing. Lucky me.

My introduction to Resident Evil: Revelations 2 continually did that — raise questions. Why were these two imprisoned? What happened at this facility? Why are we wearing bacelets? The list goes on and on.

Something PR was happy to talk about was the way in which the game will be released. On Xbox 360, Xbox One, PS3, PS4, and PC, it’s episodic and priced at $5.99 per installment, with four “core” episodes planned. Each episode is estimated to be two to three hours in length the first time through. In early 2015, Capcom will start releasing weekly over the course of a month. There’s a season pass for $24.99 that offers some extras, and a physical retail version for $39.99 that has even more additional content.

Even though not a lot was divulged, this brief look gave some insight as to the base facets of the game. So far, it seems as if the atmosphere and combat are on-point, even if the swearing isn’t. That’s a perfectly acceptable start.