To binge or not to binge…

There’s certainly been intrigue surrounding Resident Evil: Revelations 2. Since its existence was leaked a few months back and several cryptic images of a derelict prison made the rounds, there has been speculation about what to expect from this installment. And, with the return of characters from other titles, there is evidently a larger focus on linking things back to the series’ past.

Its predecessor, Resident Evil: Revelations, felt very much like a back-to-basics approach to the series, which earned a lot favor from fans. With the upcoming sequel, more characters from the past are brought back to the forefront and are drawn into a greater conspiracy. Obviously, this isn’t entirely new for the franchise. However, with the greater focus on mystery in Revelations 2 and how Capcom plans to release the game in episodes, it could give the series a much needed change of pace. After Brett’s hands-on time with the sequel back at Tokyo Game Show, he was left unsure of what to expect from the game. And, judging from my own time with it last month, that might be for the best.

This is one title you might want to go into blind.

Between the events of Resident Evil 5 and 6, Claire Redfield and Moira Burton, daughter of fan-favorite Barry Burton, awaken to find themselves in an abandoned prison on an isolated island. With strange bracelets on their wrists, they discover they are under watch and in communication with someone observing them through security cameras throughout the facility. After getting situated, they soon learn the prison is inhabited by bizarre creatures known as the Afflicted, and they must fight to stay alive and uncover the truth about their kidnapping.

As Claire and Moira delve deeper into the facility, they’ll have to solve puzzles and take out these monsters while acquiring new items and abilities. But in typical Resident Evil fashion, things are not what they appear and the stakes are much higher than you would initially expect. 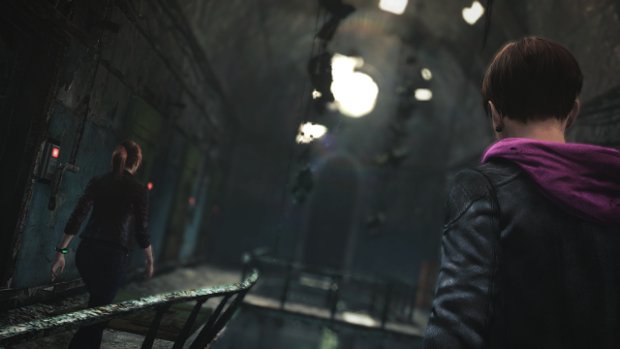 The original Revelations was well-liked among fans because of its happy mix of action and horror elements from both modern and classic Resident Evil titles. Revelations 2 definitely aims to rekindle the same atmosphere and pace.

When you’re exploring the ruins with no enemies around, the eeriness and dread is more pronounced, as at any moment you can be attacked by the Afflicted. But during combat, action is tense and relentless, especially when fighting multiple foes. Though the beginning of this episode is fairly linear and doesn’t leave much room to explore and find clues about prison, you’ll have more opportunities to trek at your own pace as you continue with the story.

One of the most talked about aspects of Revelations 2 is the release plan Capcom has in mind. Following the success of games such as The Walking Dead and The Wolf Among Us, Revelations 2 will release episodically. While the first game felt like binge-watching an entire season of television, the sequel plans to release an episode each week after its first installment launches. With four unique episodes covering different sections of the story, you’ll venture across the island while also experiencing events from the past that have great significance.

With the popularity of episodic gaming and shifting TV viewing habits, Capcom wants fans to engage in ‘water-cooler’ style conversations after each episode. As with the original, Revelations 2 will play with perspective and time, showing things through the eyes of another, which ultimately tie into the present events. Since each episode ends on a cliffhanger, the clues and references left behind should arouse discussion. Though, if episodic games aren’t your thing, you can always wait for the full package, which coincides with the release of the final episode. 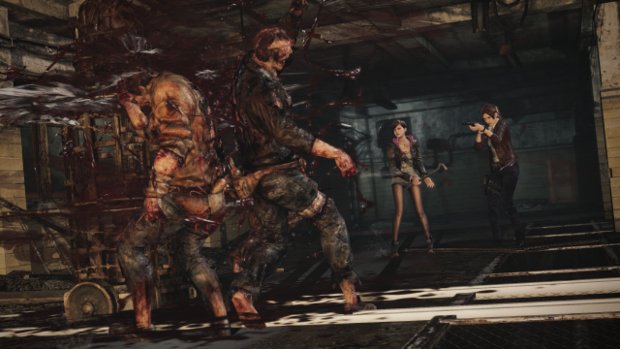 It was great to be in the shoes of Claire again while also getting to see Moira Burton, whom was referenced all the way back in the original game — though she was definitely a lot more foul-mouthed and punk-ish than expected. You haven’t lived until you’ve heard someone in a Resident Evil game say “What in the cock did I just see?” I suppose Revelations 2 is aiming to retain the strange dialog from classic games.

In order to survive the prison’s dangers, Claire and Moira will have to work together. While Claire will handle most of the combat and action, Moira offers support abilities, such as using a flashlight to navigate dark areas, and finding hidden items. At any time you can switch between the two characters, as each has their own role. Oddly enough, Moira is adverse to guns and refuses to use them entirely, even during such trying circumstances.

While Claire can definitely handle herself in high-risk situations, Moira will need to be cautious and avoid conflict, as the only defense she has is a crowbar and flashlight, which can momentarily blind the Afflicted. Each character has their own inventory menus, meaning you’ll have to switch out resources and divvy up health items. Although Moira seems like she’d be an annoying character to escort, she largely stays out of danger during combat. In some cases, you can use neat tactics between the characters to get the upper hand on your enemies. Blinding the Afflicted with Moira’s flashlight can allow Claire to deliver devastating blows to the stunned enemies. 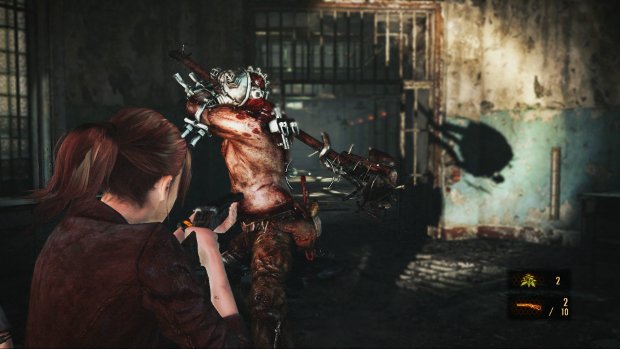 One thing that became apparent early on was how responsive the movement is. As one of the first RE games to allow both moving and shooting with expanded melee combat, Revelations definitely improved on issues that plagued past titles. In Revelations 2, movement and aiming feel much tighter, and with the addition of a dodge button, you’ll no longer have to rely on the spotty contextual action dodge. Moreover, item management is far riskier than before. Inventory management is in real time, and using health items is no longer instantaneous.

For the first time in the series, players will be able to use crouching as a means of navigation. While crouching, you can sneak past enemies or get the jump on them. This is especially handy during areas where you are vulnerable and need to evade the enemy. I got the impression that the danger is much higher in this title, and it seems the developers want players to feel more in control when it comes to how best to handle the situation. 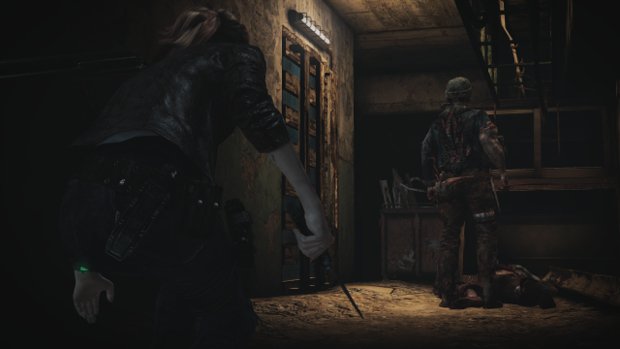 Of course, every Resident Evil game needs a set of creatures to fight, and the sequel has them in the form of the Afflicted. The former residents of the prison were infected with a virus that turned them into mutated creatures that stalk and hunt anyone who isn’t under the influence. Resident Evil fans will recognize them as a mix between past series enemies — the Ooze’s muddy and melted exterior with the Ganado or Majini’s brutality and resourcefulness. While they’re a challenging presence in the prison, they felt derivative compared to other types of monsters from the franchise’s past. But, this was just the beginning of the game; here’s hoping they have more tricks in store.

Though I was a bit disappointed to not get a glimpse of the returning Raid Mode, I was happy to hear that it will unlock after completion of the first episode. So, fans of the addictive, super fun action gameplay will be happy to jump back in early on. Moreover, Raid Mode will feature online co-op for those looking to take on the difficult challenges with a partner.

The mystery surrounding Revelation 2‘s plot is one of its greatest strengths, and discussing the story with other fans after each episode should add intrigue to the experience. Given time to play the first episode for about half an hour, I very much want to know more about what led up to the events in the prison, and which other characters from the series’ past are involved. This will be an interesting experiment for Resident Evil, and I’m keen on seeing how it’ll unfold.