Capcom has been on quite a roll lately. With the announcement of Street Fighter V, new releases in the Devil May Cry series coming, and the recent success of its HD Remaster for Resident Evil, it seems like the once troubled publisher has found its way back to the hearts of fans. And with the reveal of Resident Evil: Revelations 2 late last year, it has plenty more in store for fans of the survival horror series.

I got the opportunity to play a decent chunk of Revelations 2 last year, and I was pretty impressed with how the mystery was being brought back to the series. Dabbling into episodic gaming, this installment is set to be released through four episodes; one will release every week from February 24th to March 18th. It’s a pretty experimental, and unique take on Resident Evil, and that might be just what the franchise needs.

But just before its debut next month, the folks at Capcom invited me out to get another crack at their experiment. And during my session, I got reacquainted with an old buddy from the series’ past, and even got to take the new and improved Raid Mode for a test run. 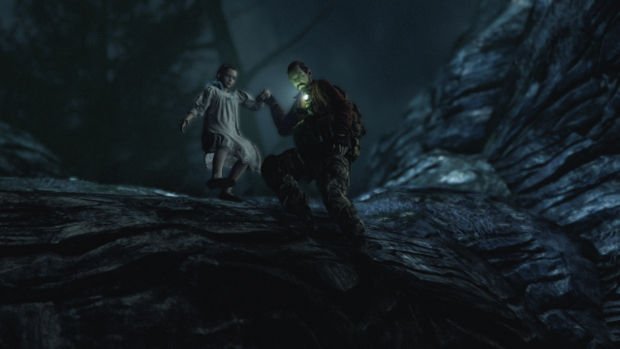 Taking place between Resident Evil 5 and 6, Claire Redfield and Moira Burton (daughter of S.T.A.R.S veteran Barry Burton) have been kidnapped and trapped on an abandoned prison island filled with deadly creatures known as the Afflicted. Using their wits and teamwork, they fight their way through the facility and manage to send a distress signal to the mainland. Realizing that his daughter has been kidnapped, Barry Burton journeys to the island ready for battle. Once he reaches shore, he meets a young girl named Natalia, who possesses strange powers and close ties with the mysteries on the island.

Barry and Natalia’s story picks up about halfway through Episode One. Once Claire and Moira reached a certain point in the plot, the perspective switches over to the second duo. Though Barry is definitely up to the challenge, he’ll have to combat with nastier variations of the Afflicted. Similar to Resident Evil‘s crimson heads, these new creatures are more aggressive and are far more mutated than the ones Claire and Moira encountered. Some use neat tricks such as invisibility, and some have pustules that explode after being damaged.

Like its predecessor, Revelations 2 will show different perspectives to the story. With Claire and Moira leading the charge while Barry and Natalia witness the aftermath of their ordeal and make their own unique way through the island, you’ll experience multiple sides of the story as it unfolds. Additionally, decisions and actions made throughout the story will have an impact on the other team. For instance, while in a room filled with traps, Claire and Moira used to them cover their escape from the Afflicted. Unfortunately, as Barry and Natalia enter the facility in an different way, and they find themselves on the receiving end of the traps and must deactivate them to proceed. 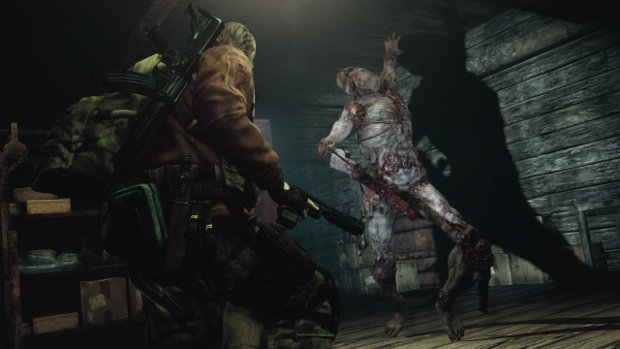 Much like the dynamic between Claire and Moira, Barry and Natalia use their own unique skills together to overcome the odds. With one focusing on all the fighting, the other offers support with finding items and reaching spots that the first cannot. Things are a bit different for the second duo. As Barry has come to the island prepared and ready for battle, he brings with him a lot more firepower than Claire had. Moreover, Natalia possesses mysterious abilities that allow her to track nearby enemies, even through walls.

One moment during Barry’s trek outside the facility showed just how important teamwork was. While moving through a seemingly empty wooden storage house, the duo senses another creature nearby. Not knowing where its coming from, Barry pressed on. Once we got to a wooden door that was jammed, the creature began to get closer. Though I could have ignored it and continued with the door, I chose to investigate the surroundings. Eventually, I discovered the creature in the ceiling, which was a mutated version of the Afflicted known as the Revenant. Using Barry’s arsenal, including his trusty Python, I was able to take down the creature. It was a pretty tense moment, and if I had chosen to ignore the creature, then it would’ve gotten the jump on Barry and Natalia.

At this point, my time with the campaign came to a close. It was incredibly exciting to finally play as Barry Burton in a legitimate entry in the series. Yes, there’s Resident Evil Gaiden, but that’s regarded as non-canon, largely ignored on account of it being unceremoniously released on the Game Boy Color. Barry is such a bro, and seeing him take charge and kick ass was pretty great. Even though his side of the story feels largely the same as Claire’s, it was still pretty exciting stuff. 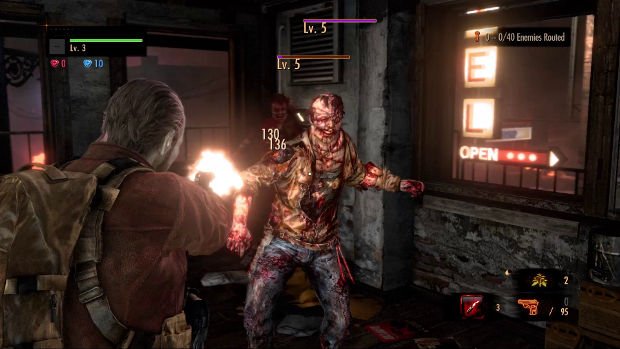 My time with Revelations 2 didn’t end there. After switching off the campaign, we moved right over to the new and improved Raid Mode. As one of the biggest successes with the original Revelations, Raid Mode was something of an experiment to see if they could try something new with the standard RE bonus mode. As an alternate take on the popular Mercenaries mode, Raid Mode tasks players with battling through a gauntlet of enemies while leveling up, acquiring buffs, and collecting new weapons. Think Monster Hunter, but with Resident Evil shooting and waves of enemies to take down. It was easily the most time I spent with the original game, and Capcom has decided to expand upon it in a big way.

Now featuring a light story to offer some context to the chaotic battles, you play as an A.I. within a battle simulator from the Red Queen Alpha database. Within the digital HUB area, represented as a vestibule within a mansion, you’re tasked with collecting data from different characters while running simulated battles against challenging foes. As you complete tasks, you’ll find audio-logs that reveal more about Red Queen Alpha and its connection to the outside world. As you conquer challenges, the A.I. gains gold which can be spent on upgrades, new weapons, and new missions to engage in. Moreover, the A.I. can take the form of many different characters from RE‘s past and present (including Wesker and Hunk), and use their unique skills in digitally recreated areas from the main campaign, and even from previous Resident Evil titles.

Instead of just running through a single gauntlet of missions, there are several different types to select from. Main Missions are the central focus in Raid Mode, but cost currency to take part in. In order to prevent players from repeated loot runs on specific missions, you’ll have to take part in daily missions and event challenges to gain more cash to re-enter the main missions. Each main mission pack has six levels to fight through, each with their own medals and rewards to find. 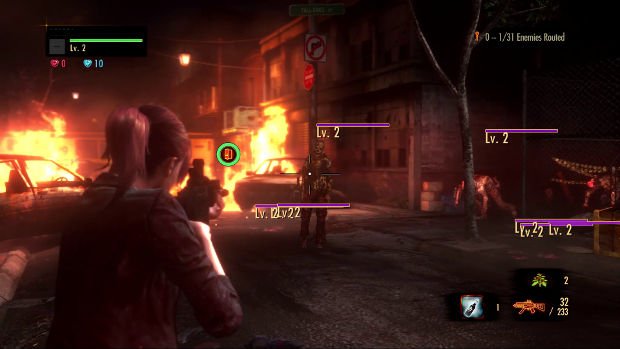 Every playable character can level up (maximum level 100) and has individual perks to acquire and strengthen. Much like the previous titles, you can find new weapons and upgrades for existing gear. Just like the original, Raid Mode spices up the cannon fodder by making the foes a bit beefier. Some of them possess buffs that increase speed, strength, size, and even bestow them with force-fields that soak up damage. The stages I played in were set in Tall Oaks and Edonia from Resident Evil 6, and the objective was to clear waves of enemies while making it to the end goal.

I had a blast playing through the Raid Mode in Revelations 2. Not only is it far more comprehensive than Mercenaries mode, but RE:R2 ups the ante with new features and content. It was great fun battling through Tall Oaks with Barry, and the variety of different enemies I faced kept things pretty interesting.

Though I’m a bit worried that repetition could detract after the long haul, and that Raid Mode will not have online co-op play available until sometime after the release of the final episode, Capcom seems to be pretty headstrong with supporting the game. The idea of daily challenges and updates makes me look forward to what’s to come.

With the release of the first episode of Resident Evil: Revelations 2 next month, it’s going to be interesting to see how Capcom’s experiment with episodic gaming will turn out. The plot certainly feels as though it wants to evoke discussion and debate among fans, and coming off the win the publisher just had with Resident Evil Remastered, it’s looking like there’s a bright future ahead for the once troubled Resident Evil franchise.