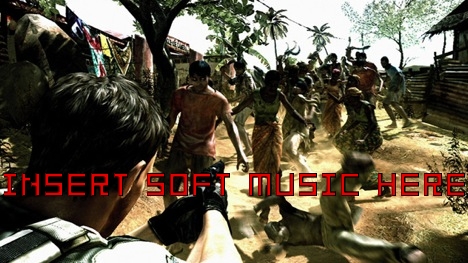 Resident Evil 5’s composer, Kota Suzuki, recently took a trip to Los Angeles to record the melodramatic portion of the upcoming horror game. Suzuki utilized the 103-piece ensemble of the Hollywood Studio Symphony to lay down his tracks. At the end of the day, only fifteen minutes of music were required to fulfill the need.

Scoring Sessions reports that the music “sounded large on the stage, with frenetic orchestral driving rhythms, and strong melodic themes.” Portions of the session had an African theme, which was pronounced by an assortment of percussion that originated from the continent. An additional little ditty was created for the opening of the game.

As much as I would love to act like a connoisseur of fine music, I still find the majority of my time with KMFDM pumping in my ears. Fifteen minutes seems short, though, even if the score is looped repeatedly over crazy break beats. Yet I like the trouble to which Capcom went. To me, flying overseas instead of emulating an orchestral score is a sign of quality to come. Spare no expense, Capcom. I think we’re all ready to bust some zombie heads again in 2009.