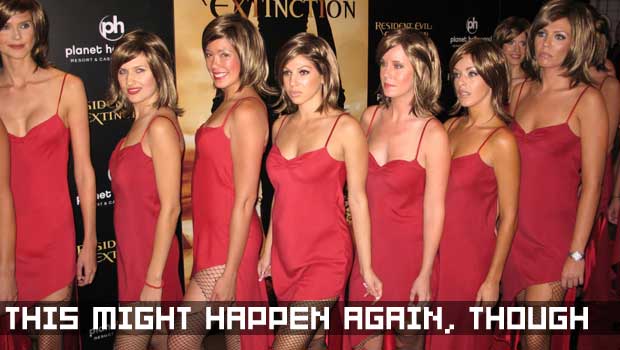 Well, there’s another Resident Evil movie in the works, and there’s nothing you can do to stop it. It’s called Resident Evil: Afterlife, and they’re making it like, right now or something.
According to movie Web site ComingSoon, Afterlife is going to continue the series’ tradition of making something that only vaguely resembles the games. Screen Gems, the studio behind the upcoming film, has this to say about the plot:

In a world ravaged by a virus infection, turning its victims into the Undead, Alice continues on her journey to find survivors and lead them to safety. Her deadly battle with the Umbrella Corporation reaches new heights, but Alice gets some unexpected help from an old friend. A new lead that promises a safe haven from the Undead leads them to Los Angeles, but when they arrive the city is overrun by thousands of Undead and Alice and her comrades are about to step into a deadly trap.

Sure, why not? I mean, I think we can all agree that this sounds like a better idea than pretending the previous three movies didn’t happen and then making a film closely based on Resident Evil 4. Right? But I have a question: What’s up with the capitalization of “Undead,” Screen Gems?