The storm outside used to haunt you obsessively. Harsh winds clash into the shuddering walls of the Baker residence. You hear an erratic moan from upstairs. Or was that the wind? You don’t know. You’ll never know. It may have been one of the residents, but it’s certainly not your missing wife, Mia.

You have no choice. You walk, suspiciously alone, into the foyer. The floorboards squish underneath you with each step. A lone piano key hammers through the creaking walls, irritating the silence. You don’t make the decision; your head immediately snaps toward the sound to detect the source. It’s almost a relief — finally, an image in the auditory static.

As the environmental cacophony rises in and out of silence, all that’s left to focus on is your breathing. It’s a constant reminder of your mortality, but at least it exists.

This is shelter. This is safe. No matter how dreadful it is to exist in all this noise, this is safe. 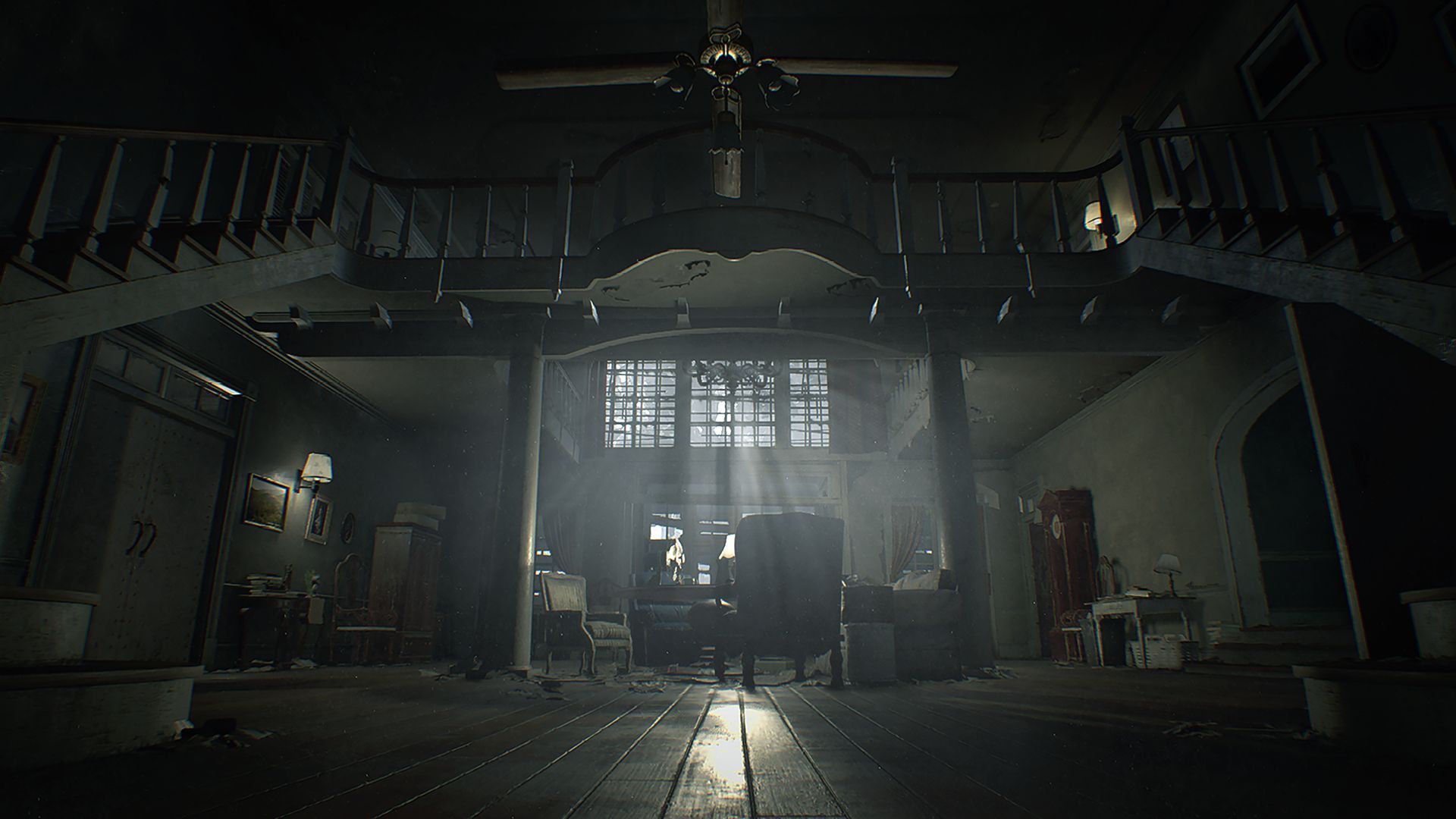 Resident Evil 7 was one of the most memorable games of 2017. Not because of its visuals, but the sound design.

I put six hours into what I like to call a “brave attempt” at a VR-only playthrough of RE7. If I’m being honest, it was more of an embarrassing form of live entertainment for my roommates — either way, I never beat the game. I lost my save file to a corrupted PS4 and couldn’t fathom putting myself through that level of stress again. Willingly donning the PSVR headset and walking back into that house from ground zero is fucking daunting.

But now it’s the game’s one-year anniversary. It got me thinking: should I return to finish what I started? I’m nearly ready…but the game’s use of 3D audio petrifies me to this day.

For those unfortunate enough to have never experienced RE7 in virtual reality, this scene from It’s Always Sunny truly captures the essence of the game. Just imagine less light (but enough to know there’s way more blood), and every line of dialogue is, somehow, directed at you. You are no longer you, though. You are Ethan.

Placing yourself in Ethan’s shoes is effortless. Between the breath and heartbeat, the consistent irregularity of your body’s noises is partially responsible for keeping you sane. In this way, Ethan is a vehicle. He feels more inescapable than the Baker family themselves. You, as Ethan, are a source of noise. You hear every breath; every cry for Mia. Ethan’s muttered obscenities materialize in reality when they come from your own mouth. With the slightest gasp, Ethan can inadvertently steer an atonal soundscape into a tense nightmare. The visuals just flesh out an already established dread.

There’s a pervasive wetness all around you. Nothing is ever particularly “dry,” and the constant sound of the storm outside is a stark, yet subtle reminder. The sound of your own footsteps is enough to add to the putrid echo chamber. Those foyer floorboards may have been squishing water. Maybe mud. Or blood. It couldn’t have been all of them…but you wouldn’t know. You didn’t look. And why would you? If your footsteps are all you’re hearing, you’re alone. If you’re alone, you’re alive.

Your ears quickly become your most valuable asset in a grueling and enduring test of fortitude. Hearing is the primary sense used to survive. 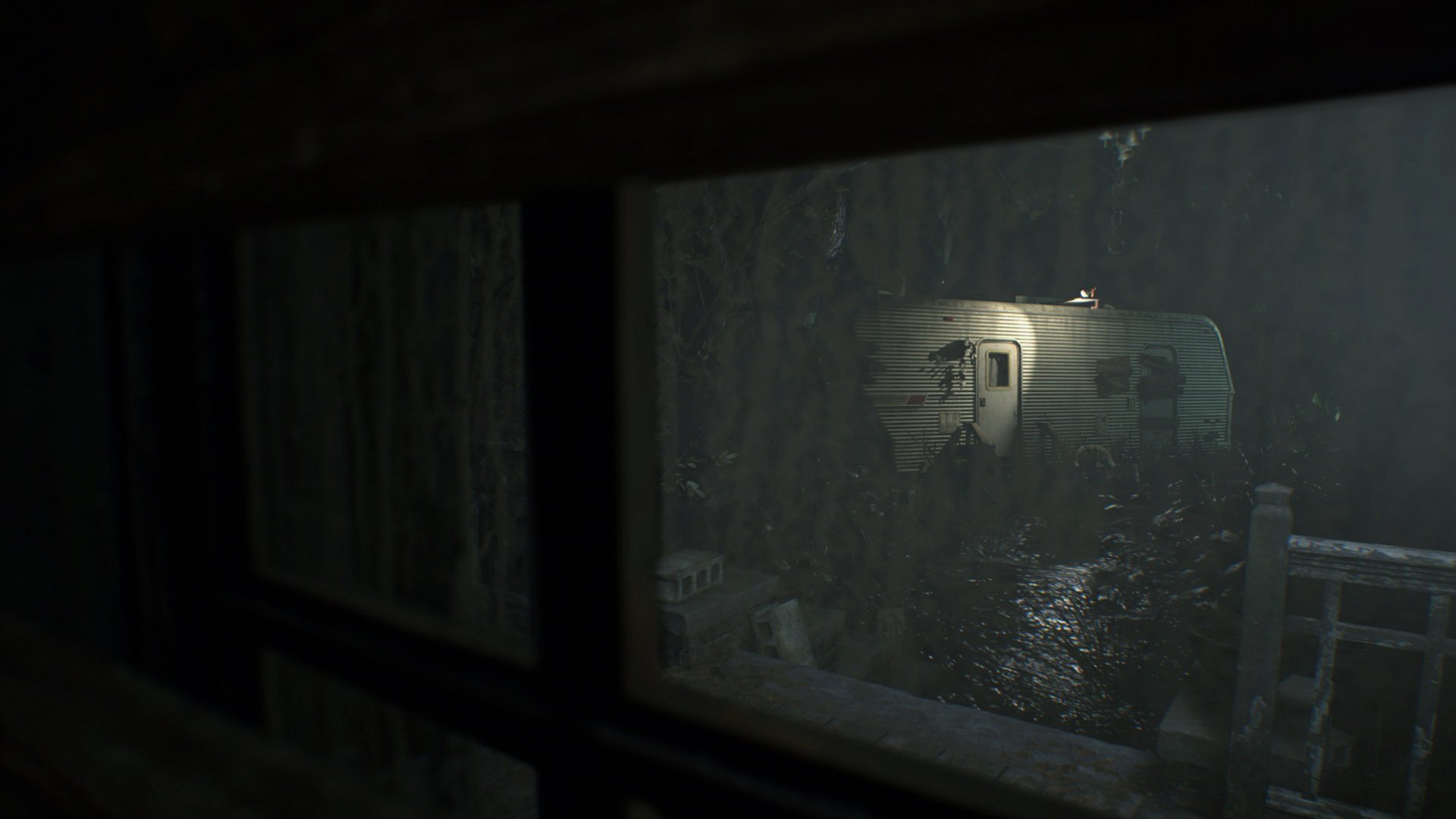 At one point in the game you leave the house and enter the yard. Looking back at the house filled me with a refined sense of retrospective bravery. I was comfortable in a visually unfamiliar place solely because I wasn’t engulfed in the sounds of that house. It looked terrifying, the outside, but I ran headfirst into the unknown just to get away from that clamor.

It wasn’t until I got outside that I realized how suffocating the house had become. Now that I had escaped the resonant horror, I realized what silence actually felt like. I was in the storm instead of stalked by it, and, for as terrifying as it was, I felt free. 3D audio made this comfort nearly palpable. The thunder, the rain — it all remained unchanged, just no longer muffled. Gusts of wind blew through the oppressive canopy of leaves above me, offering a soft, shimmering static as my new benchmark for silence.

That erratic moan that clearly came from upstairs? That’s trees now. Whatever sludgy terrors that lied await in the basement are replaced, assuredly, with mud and grass. If only for a retrospective moment, going outside removed an entire axis of auditory worry.

It’s during this part of the game when you must rely on your hearing to pinpoint the position of Marguerite Baker, the family’s matriarch. You may have seen her through the decaying lattice in the house upstairs as she prowled around a lonely trailer in the front yard. Now that you’re outside, though, she’s nowhere to be seen. You hope this means that she can’t see you, either.

Traveling through the muddy bog of a front yard eventually leads you through a gauntlet of busted baby dolls. Your arrival here is unwelcome, and Marguerite is sure to let you know you’re in her domain. Most threats in the house like to hide in the dark; Marguerite carries a lantern with her. She doesn’t care if you see her. This is her territory. If she sees you, you’re fucked. While virtual reality is vital to complete the illusion, putting your head down to power through stressful moments can only be so effective. You can’t block out the binaural evil.

“All you have to do is accept her fucking gift! We love you! Why can’t you see that?!” I would prefer not to see you, Marguerite. I can hear you just fine. 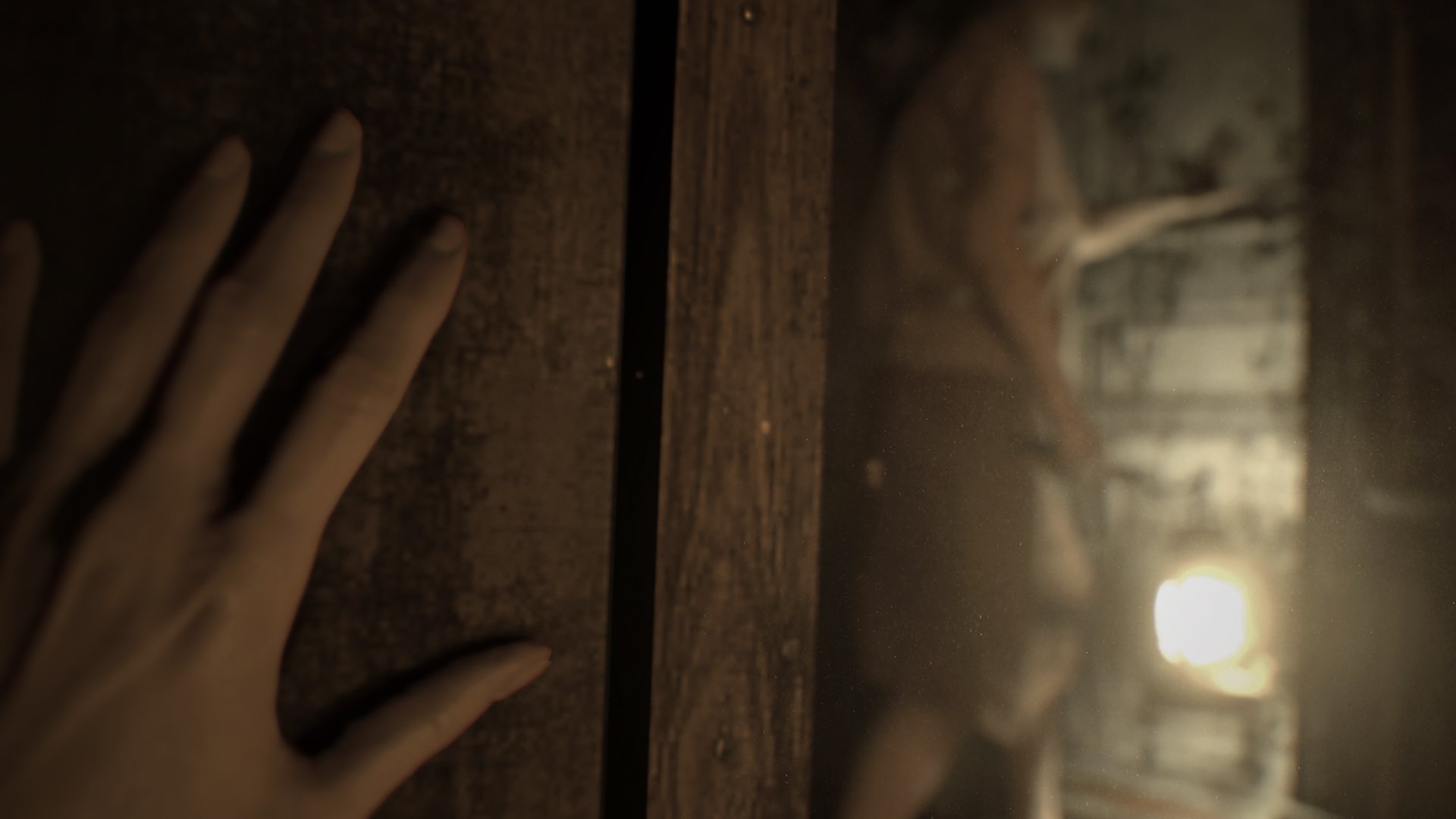 RE7 is an omnipresent audible horror. The more time you spend surrounded — quite literally — by the family, the more desensitized you become to the household and its inhabitants. Once you see whatever’s lurking, an order of operations takes precedence over instinct. You no longer worry about what’s making noise in the dark. When you know what you’re up against, you can figure out how to silence it. It’s what the game doesn’t show you, but lets you hear, that solidifies the disgust and paranoia.

You don’t need any deep-rooted knowledge of a game mechanic to feel that. You don’t even need to know the buttons on the controller.

You just need to listen.