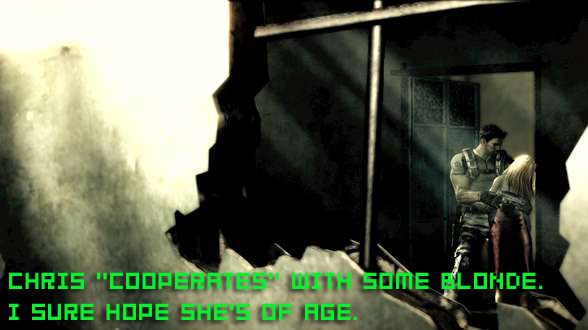 Sometime next week, I’ll be headed out to Las Vegas for Capcom’s CAPTIVATE event, where I’ll have a chance to see their forthcoming 2008-2009 line-up. Among those games will be Resident Evil 5, I’m sure — but until then, I’m scraping for all of the info I can get. And this is some good info, damn it.

GamesRadar has one of the first (as far as I know) English previews of the title, and even if it’s confusing as hell to read, it does contain a fair amount of new information. I say it’s confusing because the preview is all over the place. For example, in the fourth paragraph they use the words “In the areas where you’re separated from your partner,” but prior to that there’s no mention of a partner at all.

Later, they write “It all depends on whether you’re Player Two or not,” which is the first indication that Resident Evil 5 may actually contain multiplayer elements. Then the straightforward bomb is dropped — “Currently nameless, the mercenary’s inclusion means that, for the first time, you’ll be able to tackle a true Resident Evil game cooperatively online.”

I’m really not here to critique the preview (mine will be written with a nasty hangover, to be sure), but yeah … Resident Evil 5. Cooperative online. Discuss.