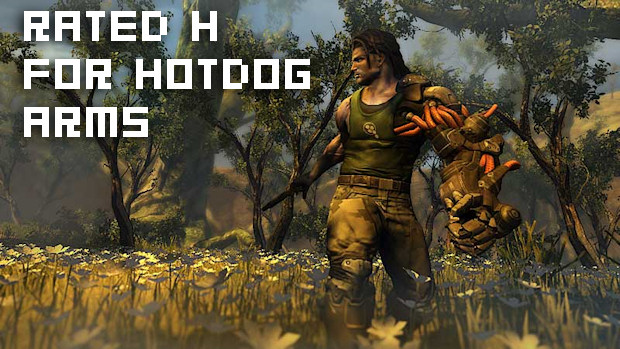 You’ve probably never wondered why Capcom’s latest Bionic Commando game is rated M, but we’re going to tell you anyway because the story is quite interesting. According to the publisher, the reason for the rating isn’t because they intended to fill the game with violence and foul language, but because of Resident Evil 5.

See, Bionic Commando was originally intended to ship with a demo for the popular action sequel, which caused the ESRB to rate it M for Mature. Since BC ended up shipping two months after RE5, that decision became a moot point. However, since the classification had already been awarded to the game, Capcom decided not to tone it down and go for a T rating. In fact, the studio had already “upped the violence and language to hit an M.”

Even with the violence and language strengthened, it’s looking quite likely that Bionic Commando will be pretty tame in comparison to more gratuitous games out there. The game could easily have been a T, but it seems the ESRB’s decision is final. Still, that won’t stop kids getting their hands on it, only for the game to be banned by the media once they start trying to graft hotdogs to their arms.