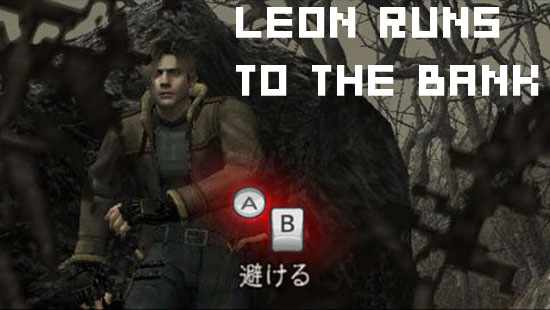 What do you get when you add waggle to one of the most critically acclaimed games ever, and then slap a $29.99 price tag on it? You get over 1 million units shipped worldwide, that’s what!

Today, Capcom announced that Resident Evil 4 Wii Edition has hit the 1 million unit shipped milestone. Imagine that, an M-rated “hardcore” title selling by the boat load on the Wii! Hey, maybe people actually will buy these kinds of games for the Nintendo’s console if they’re actualy — gasp — good! Hey Valve, are you listening?

It remains to be seen whether or not Capcom can repeat the success with Resident Evil: Umbrella Chronicles, which hits shelves on November 13 … the same day Super Mario Galaxy is in stores. Ouch.

SAN MATEO, Calif. – Oct. 30, 2007 – Capcom®, a leading worldwide developer and publisher of video games, today announced that Resident Evil® 4 Wii Edition for the Wii™ video game system from Nintendo has shipped over one million units worldwide. The game carries an “M” for mature rating from the ESRB (Entertainment Software Rating Board) and a suggested retail price of $29.99.

Since the release of the first Resident Evil game in 1996, the series has shipped over 33 million units (as of October 30, 2007) and is valued as one of Capcom’s strongest and most original intellectual properties (IP). RE4 Wii Edition retains the intensity of the original Resident Evil 4 while bringing players a totally new play experience through the use of the Wii Remote. In this way, by retaining the interest of the core fanbase and expanding outward toward new casual players through the Wii platform, Capcom has broken the 1 million units milestone, and successfully captured the attention of a new set of users.

It is Capcom’s on-going plan to aggressively pursue the continued creation of unique and inspired creations for the Wii, including such titles as Resident Evil: The Umbrella Chronicles, which is set to go on sale on November 13th, followed by We Love Golf™! in 2008.

To stay at the cutting edge of the next generation of gaming, Capcom is committed to researching and developing new processes and techniques specific to each of the unique platforms to create a revolutionary gaming experience. Building on the success of last year’s Dead Rising™ and Lost Planet™ for the Xbox 360™ video game and entertainment system from Microsoft, both of which were million-sellers, Capcom’s success at shipping over 1 million units of Resident Evil 4 on the Wii reflects the strong, creative R&D facilities which have allowed the company to be a success on every major next-gen platform.

Resident Evil® 4 is one of the highest rated games on Game Rankings.com and Metacritic.com, garnering dozens of awards and nominations for its amazing game play and incredible re-invention of the “survival-horror” genre. As Leon Kennedy, players will explore a town overrun by cultists, mutants and mind-controlled villagers, using the Wii Remote to aim, fire, slash and avoid oncoming adversaries with intuitive motions and movements. RE4 Wii Edition also contains the additional content included in the PlayStation® 2 computer entertainment system version of the game.