Keep an extra RE3 save file around to earn challenge points

Half the fun of Resident Evil 3 is running through the story multiple times – not just to earn better ranks and tackle harder difficulties, but also to get some wonderfully overpowered post-game weapons.

Capcom’s 2020 remake of Resident Evil 3 uses a challenge-based system that incentives you to earn trophies/achievements and score a bunch of kills with all of the standard weaponry, among other goals. The more challenges you finish, the more points you’ll have, and the more unlocks you can buy.

That’s the gist, anyway. Before I delve into spoilers and talk about this stuff in-depth, I wanted to share a PSA: try to set aside a save file before you enter the substation. This area is ideal for early farming.

If you rushed past the substation and never looked back, no worries – it takes no time at all to reach the area again in a new file. The main trick to know is that you can score quick kills (and, in turn, wrack up points), then reload your save file to run the farming route again and again. The progress sticks.

There are a few other spots worth mentioning too. With that preamble out of the way, let’s dive in. 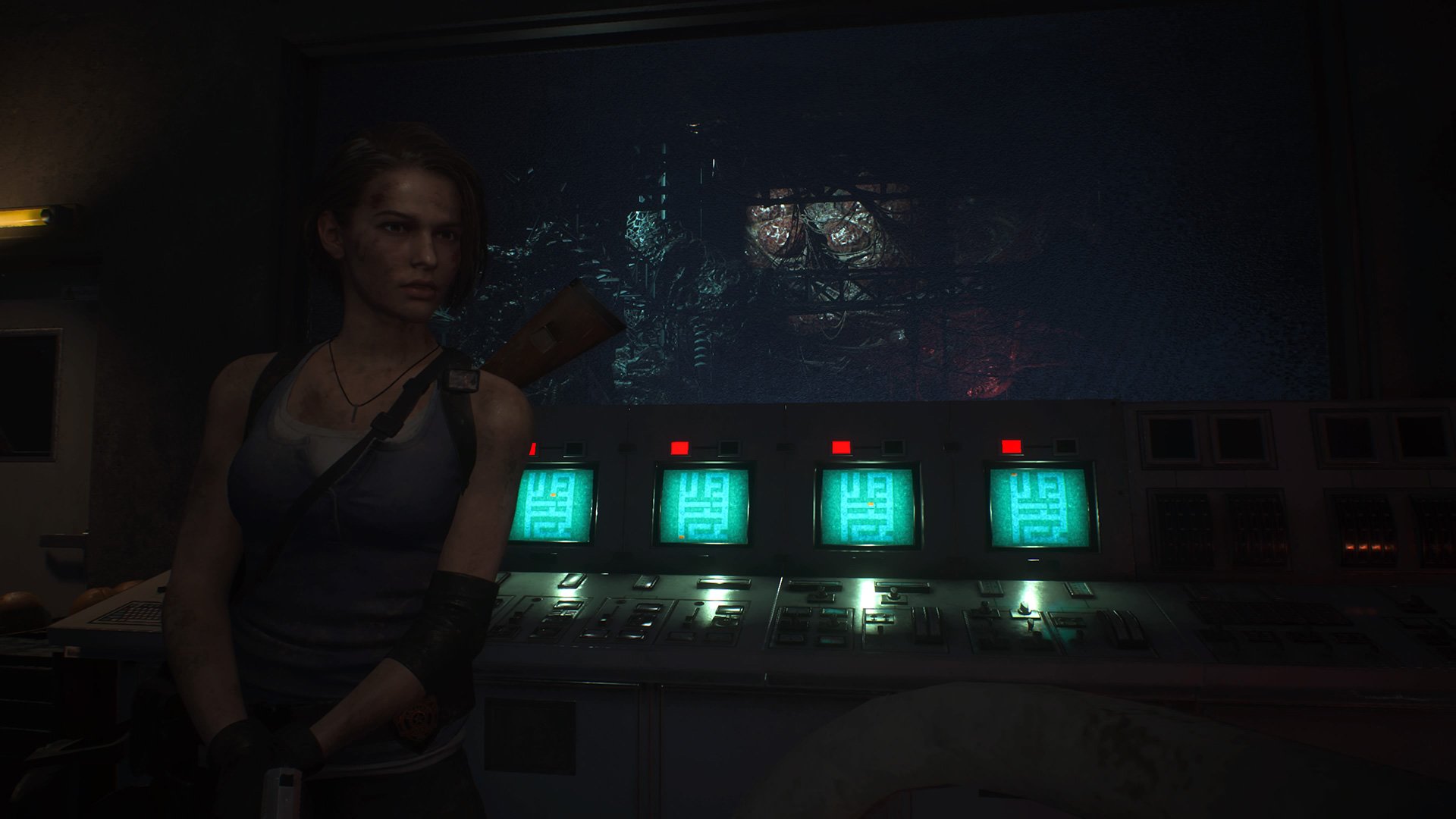 When you get to this room outside of the substation, create a “farming” save.

Okay, here we go. Spoilers ahead!

Once you finish Resident Evil 3 for the first time, you’ll unlock a shop with a bunch of coveted items including infinite-ammo weapons (the most expensive of which is a rocket launcher), special coins that increase your attack, defense, and even health-regen, and an iconic costume for Jill, just to name a few.

There are 58 Records (one of which is earned by getting everything else) that serve as your in-game challenges across all runs and saves. I won’t rattle them all off – again, many of them correspond to trophies/achievements – but I will list some to illustrate why the substation is well-suited for grinding.

Notice how these Records say “enemies” and not “zombies”? That’s the key. 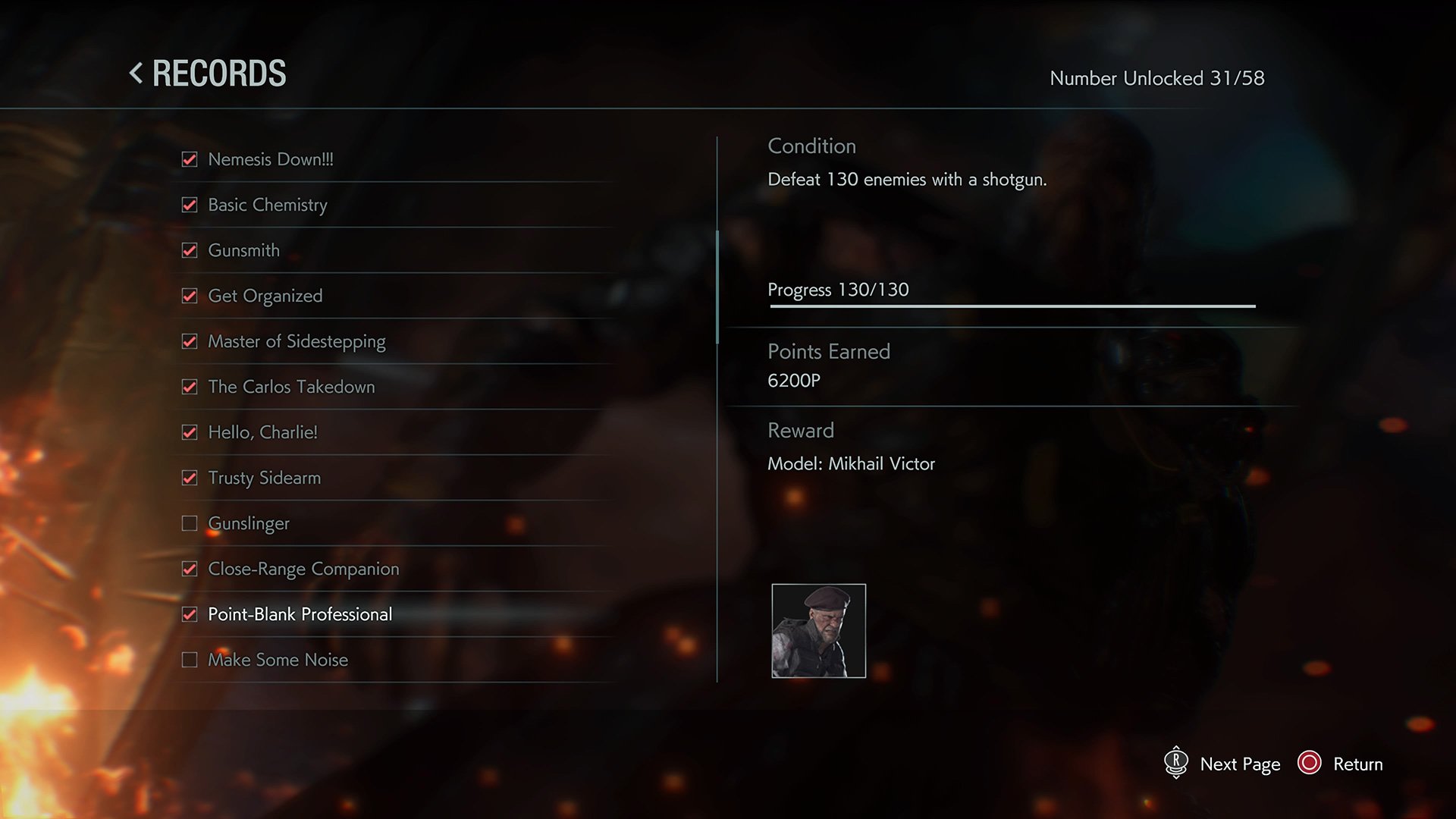 Aside from shop points, you can also unlock concept art and character models by clearing challenges.

The substation is home to a lot of creepy crawlers that go down in only a few handgun shots and a single shotgun blast. Drain Deimos are a great way to knock out the basic challenges. They’re creepy AF at first, but you’ll eventually learn their behavior. Headphones can help you hear their scurrying better.

That said, you can’t (and shouldn’t) get everything in this one spot. That’d be boring. Just use the substation as a jumping-off point. On my first normal, no-grinding playthrough in which I missed several pickups, I still had enough points to buy the infinite handgun. Then, I went back and farmed the substation to afford the infinite assault rifle. With that unlocked, I was able to farm even more.

That’s the process I’d recommend. Once it’s no longer useful, you’ll want to farm elsewhere. For instance, I ended up getting some of my challenges in the warehouse, an area toward the end of RE3.

There’s a moment with Carlos in the hospital that’s ideal for the assault rifle challenges. You’ll know it when you see it. Keep a save. In particular, you should play here and then continuously reload an auto-save that happens when you’re told to plant an explosive. That’s the most bang-for-your-buck spot.

You can check your Record progress (including your current run time) in the pause menu. 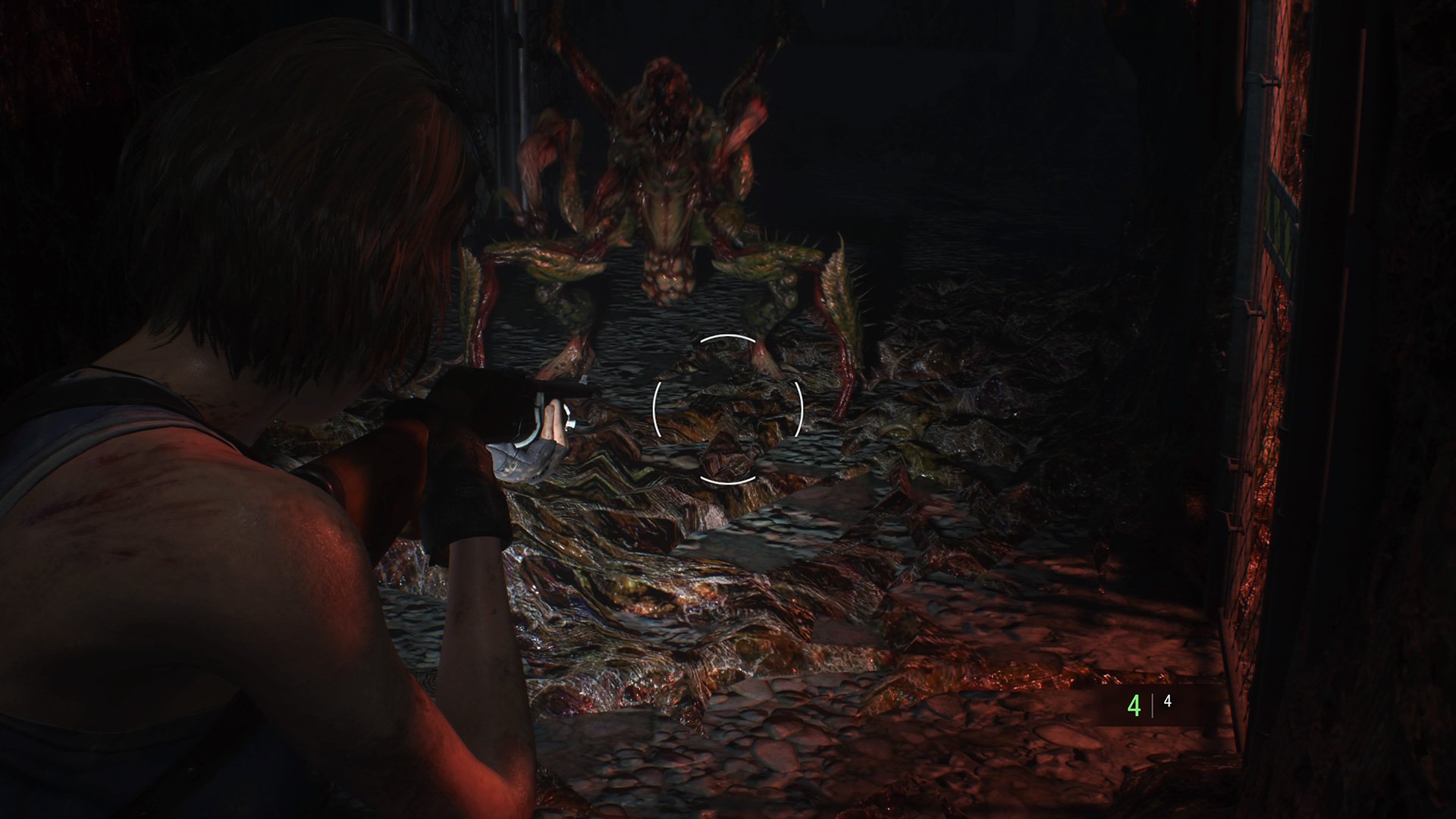 There’s a perfect opportunity to finish the Two For One Deal challenge using a shotgun in the substation.

Let me run through some of the shop rewards so you have an idea of how far your points will go. 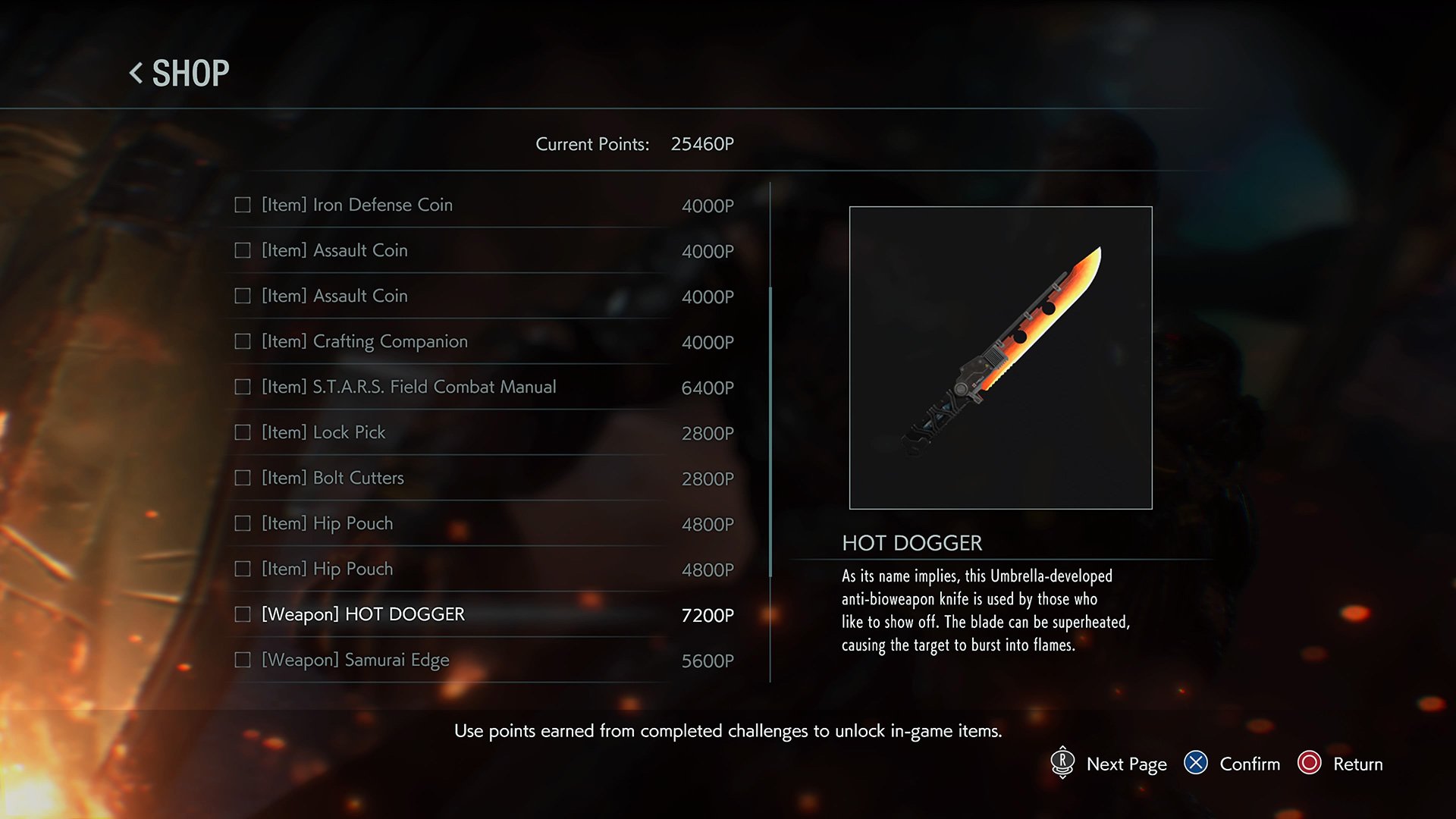 There are exactly enough challenge points available to buy every unlockable, so be careful and plan ahead. You aren’t going to want to face the harder difficulties without at least some of these weapons and survivability items. It really feels like Capcom tuned Inferno difficulty with this stuff in mind.

To give yourself more leeway to afford the Rocket Launcher sooner than later, I’d skip unlockables like the Lockpick, Bolt Cutters, Hot Dogger, and RAI-DEN. Do not pass up the S.T.A.R.S. Manual. Trust me! 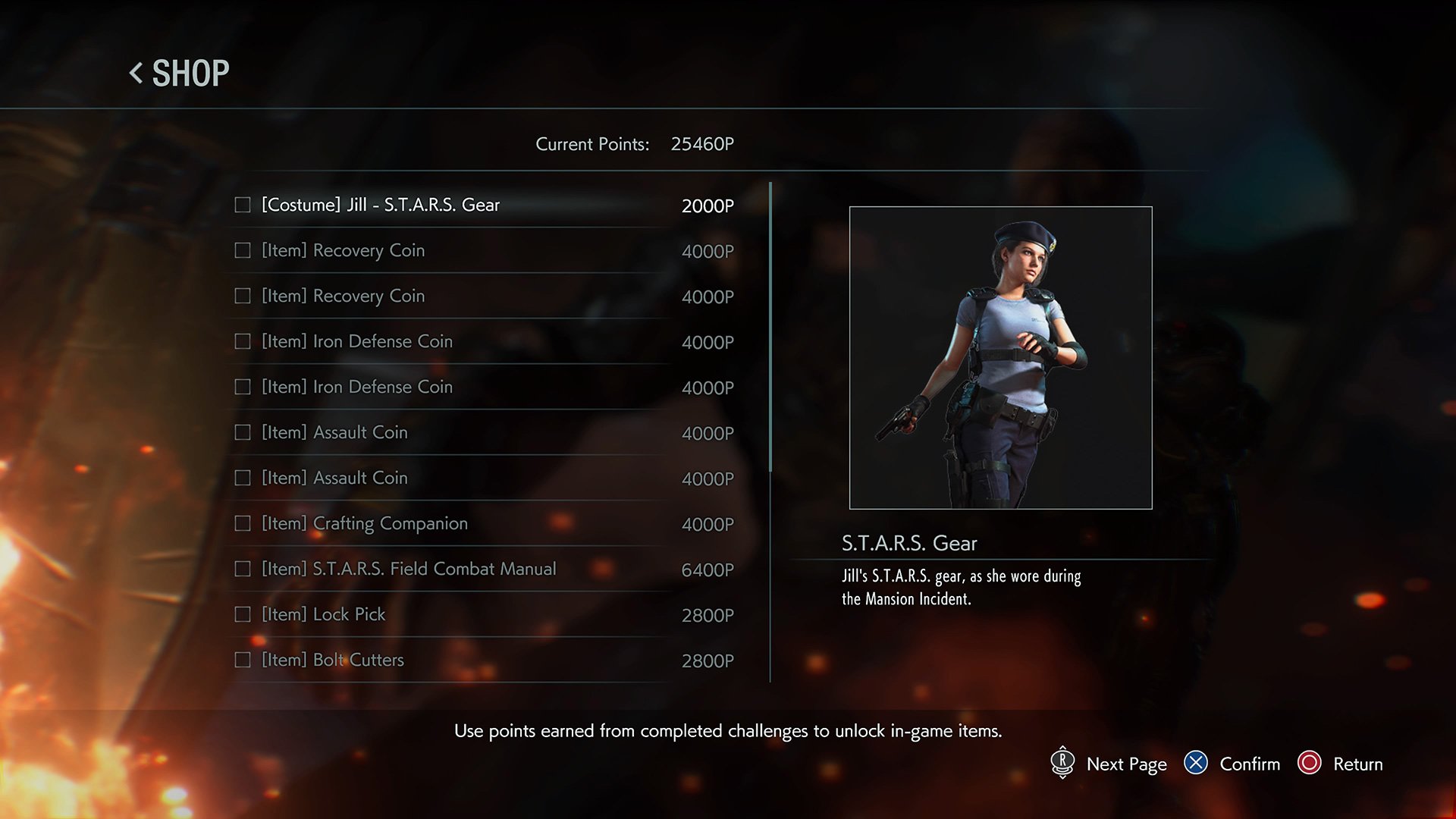 I hope we get more costumes down the line. (And Nikolai DLC.)

One last note: you don’t need to unlock the shop to start clearing challenges. They’re retroactive. In other words, you can chip away at them and, once you beat the game, all of your points will be applied.

If you’re thinking of tackling Nightmare and Inferno, the defense coins are highly recommended. In a turn of events that was as embarrassing as it was frustrating, I got killed by the first zombie in the game – like, before you even reach an item box and kick RE3 off proper. Inferno is so unforgiving.

I survived an S-rank run of Nightmare, and I’m absolutely dreading Nemesis’ final form on Inferno.