Reselling games is a distinct element of videogame culture. After all, gruesome $60 price tags for a new product force those with a tight budget to turn their older games onto a site like Goozex or…gasp…sell it to GameStop. Unfortunately, flipping those games rarely results in a satisfactory exchange.

So are there really any more options for people who want to sell or exchange a game? Last week, a new upstart called SwitchGames got in contact with us. Not only is it a peer-to-peer reselling service, there is one element that sets it off from the pack: you can donate a portion of your game earnings back to the developers who made the game.

If that doesn’t make you tilt your head sideways and look like a puppy, I don’t know what will. Hit the jump for more, and responses from SwitchGames’ founder, Jason Crawford.

Set up in 2002, SwitchGames was really nothing more than a database of videogames that Jason Crawford and his friends kept of titles that they would be willing to trade for. Soon even strangers were using the database, and it became clear that they would need to move to the next phase in the service. In early 2009, SwitchGames became a vendor site for those looking to buy, sell, and trade their games.

One of my initial questions about SwitchGames was how pricing was going to function. Too often, either GameStop buys a game at a criminally low price and then turns it over for a huge profit, or a site like Goozex sets the standard for the value of a game, and you have to earn a certain amount of points to “buy” those used games. Only eBay has really allowed all personal vendors to set their own prices any way they please. SwitchGames promises to take this approach, allowing people to sell their products at the price they choose. However, Switch Games also keeps people well aware of the average selling price of the game through a pricing tool.

Also, as a throwback to the original days of the site, players can still trade their games instead of buying and selling. For those asking about hardware and accessories, SwitchGames currently allows the trading of them, and the buying option for these products is on the way. 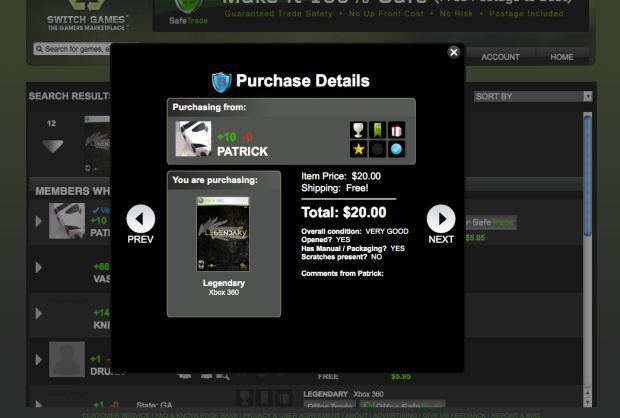 As a store, SwitchGames is a harmless and convenient service to sell your games for a higher price than other stores, and a place where you can buy used games for a lower price. This is all well and good, but the most interesting feature is its donation service.

As Crawford says, “Our mission from day one has been to empower gamers and cut out the middleman. After hearing so much debate about whether or not publishers and developers should share in the used game business, we wanted to give individual gamers direct control over the issue.” Direct control means that, should players want to send a couple bucks from the money they earned back to the publisher, they can do so!

Crawford mentions that “publishers are not under any type agreement with our company. However, we do offer developers a free contract provision, which we encourage them to include in their agreements with publishers.” This little form means that the developer receives a percentage of any profit a publisher makes from a resale on SwitchGames. 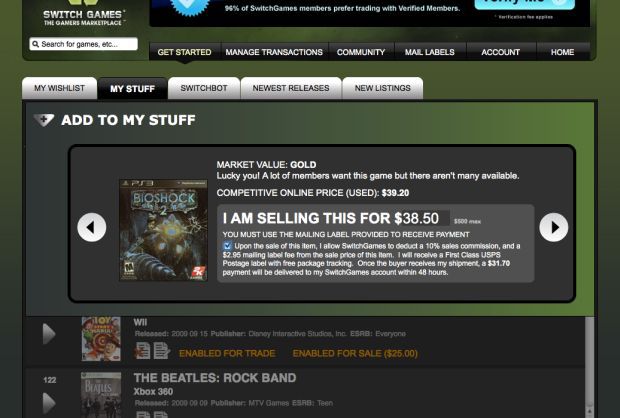 I’m sure many reading this would think that donation to a game publisher and developer is an incredulous idea. Devs and publishers have already received their cut of the profit when the game was first sold. I asked Crawford about using earnings to donate to charities as an alternative, and it may be something to come in the future. “We’ve talked about helping non-profits quite a bit,” said Crawford. “It falls into a slightly bigger idea we have for working with a few specific game-related charities. We’re still very much in the planning stages for this.” Keep your fingers crossed that an organization like Child’s Play might be able to share in these transactions.

What if publishers offered incentives for donations? “Publisher donations are just one example of how we aim to establish a direct path between gamers and publishers.” Crawford continues that they are open to ideas on how to make SwitchGames work: “We look forward to hearing suggestions from gamers, publishers, and developers.” Unfortunately, it doesn’t look like there will be any sort of third-party version of “Club Nintendo” through SwitchGames anytime soon.

It is very interesting to see how long this distribution model can function. Peer-to-peer sales is no new method of exchange, but a marketplace designed with gamers in mind is a great resource. It is  incredulous that such a service would allow gamers to donate to the publishers. This is clearly a new take on resales.

Ultimately, SwitchGames is entering an interesting era. With games costing more than ever, a new resource for resales would surely fit a niche, and the donation option is clearly a service for someone somewhere. This is something that has never been done before. While many would question the true value of such a donation, I’m willing to let people have the choice. That in itself is something that makes SwitchGames different.