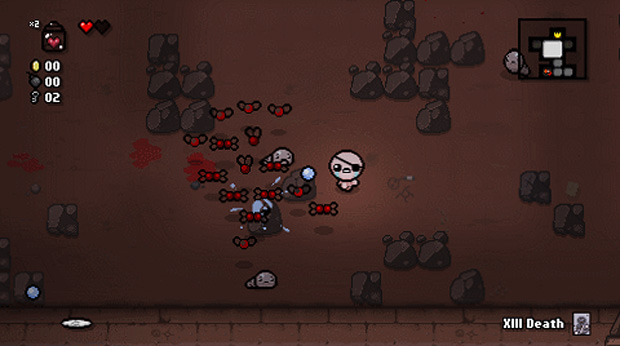 I convinced myself long ago that The Binding of Isaac: Rebirth was something I needed in my life, so every additional detail or feature we’re told about in the lead up to release is just icing on top. This week, customizable controls, “seeds,” and the graphical differences between the PS4, PS Vita, and PC versions are the topics of discussion.

The DualShock 4 and PlayStation Vita control layouts were detailed in a blog post, though none of that particularly matters because we’ll have the freedom to remap the controls to our liking. The PS Vita version won’t have “all the crazy special effects and shaders” present on PS4 and PC, but Rebirth runs at 60 frames per second across the board.

Seeds represent all of the random variables that come together to form The Binding of Isaac‘s procedurally-generated levels, and you’ll be able to write them down to replay a specific run again, or share them for a bit of friendly competition. That said, there are restrictions in place — items cannot be unlocked in seeded runs, for instance. Gotta earn them the hard way.

The Birth of Rebirth [The Binding of Isaac]