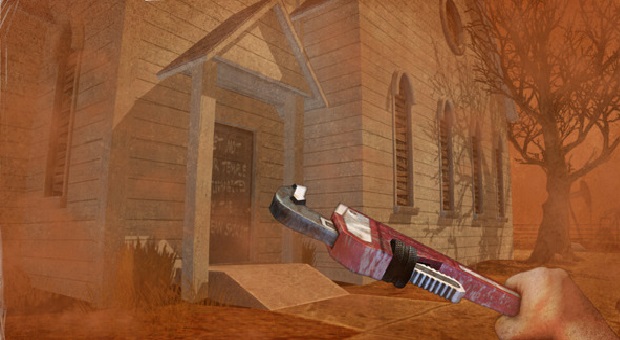 Developer Renegade Kid, responsible for the DS survival horror adventure Dementium: The Ward and sci-fi shooter Moon, has taken to Kickstarter with a brand new project. It’s called Cult County, and it aims to blend specific elements from successful series like The Walking Dead and Silent Hill to create a new breed of first-person survival horror. Color me intrigued.

Cult County follows one Gavin Mellick, a poor individual with a terminally ill mother who’s making a six-hour trek across Texas to break the bad news to his sister Alissa. Once Gavin reaches his hometown, Alissa’s nowhere to be found, likely having fallen off into a bottomless pit formed at the end of a road, Silent Hill-style. With the dust storm that’s rolled in, who knows? Anything is possible.

During his search for Alissa, Gavin catches wind of a certain cult-like group who have conveniently settled into town, and I’ve seen enough horror movies to know when a cult’s squatting in your hood, you’re gonna have a bad time. Gavin starts seeing these strange creatures popping up here and there, so obviously he’s going to have to take arms against them (probably a lead pipe) and show them what’s what. The Kickstarter page does a great job of making the game sound palatable, but a bit clichéd, following familiar tropes culled from several different games.

The development process will involve backers and fans, as they’ll be given a selection of artwork and other assets to vote on, with the hope that this will make them feel as though they’ve been part of the creation process all along. Also intriguing is Renegade Kid’s acknowledgement of fan requests about Dementium III and why it can’t come to fruition. Apparently some contractual ties have made it impossible for them to return to the license, but instead of wallowing around in sadness, they decided to move forward with new ideas and concepts.

Personally, I’m hoping that despite the overtly familiar ideas Renegade Kid plans on using to develop Cult County, it blossoms into exactly what they envision. True survival horror is hard to come by, and if you’re as excited as I am to play Team IGAS’ Resident Evil 1.5 build, you probably know a thing or two about waiting patiently for the genre to bloom back into life.