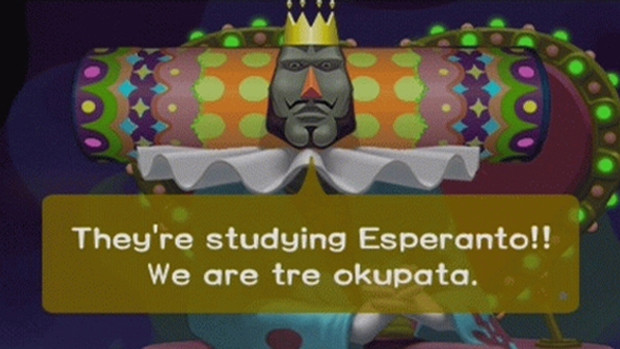 [Last week’s Bloggers Wanted topic asked you to tell me how you use video games to relax. Our first promoted blog on that topic is from Revuhlooshun, who explains how Katamari Damacy helps takes his mind off the incredibly depressing material he has to study as a History major. If you want to participate in our Bloggers Wanted topic and see your own blog on the front page, take a look at our current prompt about TGS. — JRo]

Being a History major makes you want to smash the world sometimes. It’s a field where you dedicate your time studying the repeated failures and cruelties of human life and organized society – uplifting, to say the least. You see the world for what it was and what it is: largely, a steaming pile of crap. You notice trends and patterns that seem to govern man throughout the times, soon discovering what it shall become: largely, a steaming pile of crap. You can’t believe the things that are done, the atrocities committed, in the names of so many wild or useless ideas. It makes you mad.

It makes you so mad, you just want to roll everything into a ball.

A lot of people think the Prince is trying to help his family out, gathering everything he can to build new stars and planets in order to make the universe whole. I imagine him like me: on a rampage to condense all its vile, wicked, and corrupt elements and then fling it all into space. I mean, those people really can’t enjoy being bundled together with a dozen cats and a lawn mower. Traveling on an airline and sharing an arm rest is annoying enough – imagine if you had to fly like that.

It’s hard not to love Katamari. You have these fighting games with long strings of combos and inputs and tier charts; shooters with a bajillion upgrades and killstreaks, dipped in melodrama; RPGs with droves of cutscenes filled with the gibberish of a homeschooled wizard; and simply all sorts of games which blend every genre they can think of, with so many things to unlock, so many things to memorize…

Do you know what the instruction booklet for a Katamari game looks like? No one does, because no one looks at them. You just roll shit into a ball. That’s it. What the hell do you need a manual for?

You just move your thumbs and roll things up. You don’t have to think about it, unless it’s one of those annoying levels where you have to hit a certain size, or only have a certain amount of money to roll things up with (and you inevitably grab those gold bars hidden underneath the cheap ramen because you’re not paying attention – they get me every time!).

You see how the world works against itself on a daily basis. How utterly complicated and hopeless it can be at times while it pulls itself apart. You watch as the train hits the same wall over and over again, only to continue on its merry way right back into it. People begin to disregard facts in favor of their opinions, preventing any sort of discussion to help qualm the planet’s ailments. It is depressing. It saps your hope and optimism.

Then comes this kid and his ball. Just rolling. And they are hating. They’re trying to catch him riding dirty.

But they won’t. Because he’s going to roll their asses up.

Meanwhile, the world burns, painted in ruined, miserable hues of brown and black, bombed out buildings decorating a town or village that’s probably known nothing but hatred and bloodshed for past couple of decades. Half of it starves while the other half drags off to war – there are literally around 130 or so armed conflicts going on right now across the globe. You see the images of gray and dreary cities, even in America, and you see the faces of a beaten and miserable people, for whatever reason: poverty, strife, genocide, occupation. It breaks your heart.

But that’s never what it looks like in a Katamari game, it merely looks like a homeless man threw up in your face. And your only reaction is “Bro, how the hell did you even afford Prime Rib?”

Every couple of years they release a new Katamari game with the same formula that remains largely unchanged. It is one of the few games I don’t mind playing over and over with nothing but new levels and crazy acid-induced visuals to preoccupy my brain. In fact, I wish they would make Katamari games a yearly thing, kind of like Madden. I would buy Katamari ’10, Katamari ’11, Katamari ’12, on and on until the end of time. It’s like pizza, or sex — it’s just something that never ceases to amaze, and even the worst of it is still pretty damn good.

For just an hour or two, I can escape the world. North and South Korea don’t have 160 miles worth of landmines separating them, one in five people don’t live on less than $1 a day, people aren’t being imprisoned for speaking their minds, women aren’t having their heads used as tree ornaments in Mexico, economies aren’t tanking, and no one is suffering.

And if any of that is going on, you can roll it all up and make a dope ass space station for major points.