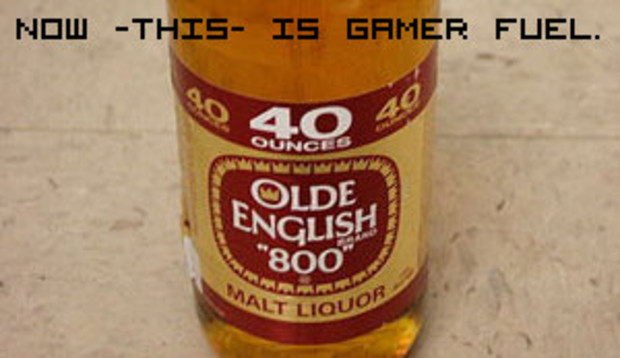 [Last week’s Bloggers Wanted topic asked you to tell me how you use video games to relax. Today, nekobun tells us how he relaxes by playing Halo while internet-drinking. (A process very similar to my own method of relaxation, except with TF2 and minus the Taco Bell.) If you want to participate in our Bloggers Wanted topic and see your own blog on the front page, take a look at our current prompt about TGS. — JRo]

Sometimes, the real world wears you down. Work, school, or whatever else day in and day out; your average Joes and Janes on the street being dicks for no reason, the state of affairs in general being pretty damn depressing… times like these call for a night out with your friends. A few drinks, getting a little rowdy, but all in good fun — the perfect cure for most anything. Problems, however, tend to arise when your friends of a similar mindset live several states away, if not practically on the opposite side of the country.

Solving this isn’t so hard, however. If you can come to terms with the idea that it’s not drinking alone if you’re at least talking to people, and you remember to pick up some food as to avoid dying of alcohol poisoning and/or starvation, it’s easy enough to meet someplace a little more virtual than the corner pub. For my friends and I, such meetups come in the form of Taco Bell & 40oz night on the planet Reach.

We’ve had nights anywhere from six people to nearly a dozen, but it’s a testament to how Halo, national fast food chains, and a little bit of alcohol can bring people together. We’ve all different backgrounds in our Halo experience; there’s a married couple who tend to play co-op or multiplayer matches together, a couple of regulars I rarely see outside of these designated evenings, a Northeast Corridor ex-pat who’ll jump into games with me on the reg so long as neither of us has work too early the next morning, and myself, who’s obsessed with the lore and more into milking Score Attack these days for Commendation progress than actually playing with other people. None of that, nor our real-world differences matter when things come down to a sack full of tacos, some malt liquor, and killing space doods en masse.

There’s a formula that’s developed, of sorts, in the few instances we’ve actually managed to organize Halo: TB40 sessions. The first few matches tend to be social, dicking-around affairs: usually Speed Halo. For those not up on their Halo, imagine a long, ramped tunnel, with one poor bastard standing in the middle of it, and teleporters down at the very bottom that transport anything that falls through them back to the top of the ramp. Everyone who isn’t that poor bastard gets to climb into a Warthog of their choosing up at the very top, and begins plummeting down the ramp in an attempt to run over said bastard, who is, at the same time, trying to smash their vehicle with a large hammer and bring them over to the bastard side of things. Impacts with other vehicles, the walls, and off-timed hammer strikes tend to send the vehicles into insane loops and spins that never end thanks to the aforementioned teleporters. Yeah, it’s pretty sweet.

After the rapid spinning and chaos get to be too much, and most of the participants are through at least one 40oz, we roll on up into Big Team Battle. Woe betide anyone unfortunate enough to get swept up into our party if we’re riding less than eight deep, because things tend to be moderately loud, occasionally vulgar, and regularly sprinkled with in-jokes no outsider could hope to fathom. That’s not to say we scare or confuse a lot of people off; in fact, the opposite is more often how things play out. In the inaugural run alone, we came across a gentleman even more inebriated than the lot of us, who decided to stick around and be friendly for several games afterward, and a young man who insisted on warbling like a turkey pretty much constantly as we were playing. There’s a great deal more acceptance of strange, new players when you’ve been sippy for a while, as well as a greatly lessened concern for any trash talk generated by potentially poor gameplay.

Not that poor gameplay tends to be an issue, either; sure, we screw around on the whole a great deal more after a certain amount of alcohol is flowing through each of our veins, but great things happen regardless of sobriety level as well. An impromptu TB40 session was called for last night (which I missed the memo on, and had to settle for adobo-seasoned tilapia and mezcal as my picked poisons), and our last game saw two non-friends and the married couple dropping just as a capture the flag match began on Utopie (which, normally, is a map I despise), leaving us at four fairly buzzed men against a team of eight (later seven). Despite this, I basically ended up throwing all fear out the window, and snagged two of our eventual trio of flag captures (the second of which causing a ragequit by one of the opposing team’s members), defeating their mere single cap and winning us the game. Who says alcohol impairs your reflexes? The guy driving the ‘hog on both my pickups seemed juuuuust fine, thank you very much.*

It’s not classy, by any means, and there are probably better things we could be doing with our time, but honestly? When it’s normal for most of us not to see one another for months at a stretch, lucky if we can get together in person once a year, it’s great to have a way, once a month or so, to unwind with awesome, fun people and get a little stupid on the cheap. Taco Bell and 40oz nights help all of us cast aside both the wear and tear of everyday living, and of everyday Reach multiplayer; it’s a jungle of racists, elitists, and homophobic tweens who should be in bed already out there, and it’s nice to have a bit of liquid aid in not caring what they say or think about you.

For anyone wondering, my weapons of choice are Olde English 800, with some orange juice added in once you drink down to the label, and a few Baja Chalupas, “beef.” We tend to be pretty loose and non-judgmental, however; Mickey’s is also popular, Steel Reserve has been noted as thematically appropriate, and food alternatives such as Qdoba and Chipotle are equally acceptable. So long as you don’t pronounce it “chih-pole-tay,” like some kind of uncultured savage. I mean, really.

* – For crying out loud, don’t drive drunk, ever, you’ll kill someone. Which works if you’re running around in brightly-colored MJOLNIR armor, I guess, but is not cool if you’re behind the wheel of a real car. Always pound unwise quantities of malt liquor responsibly.