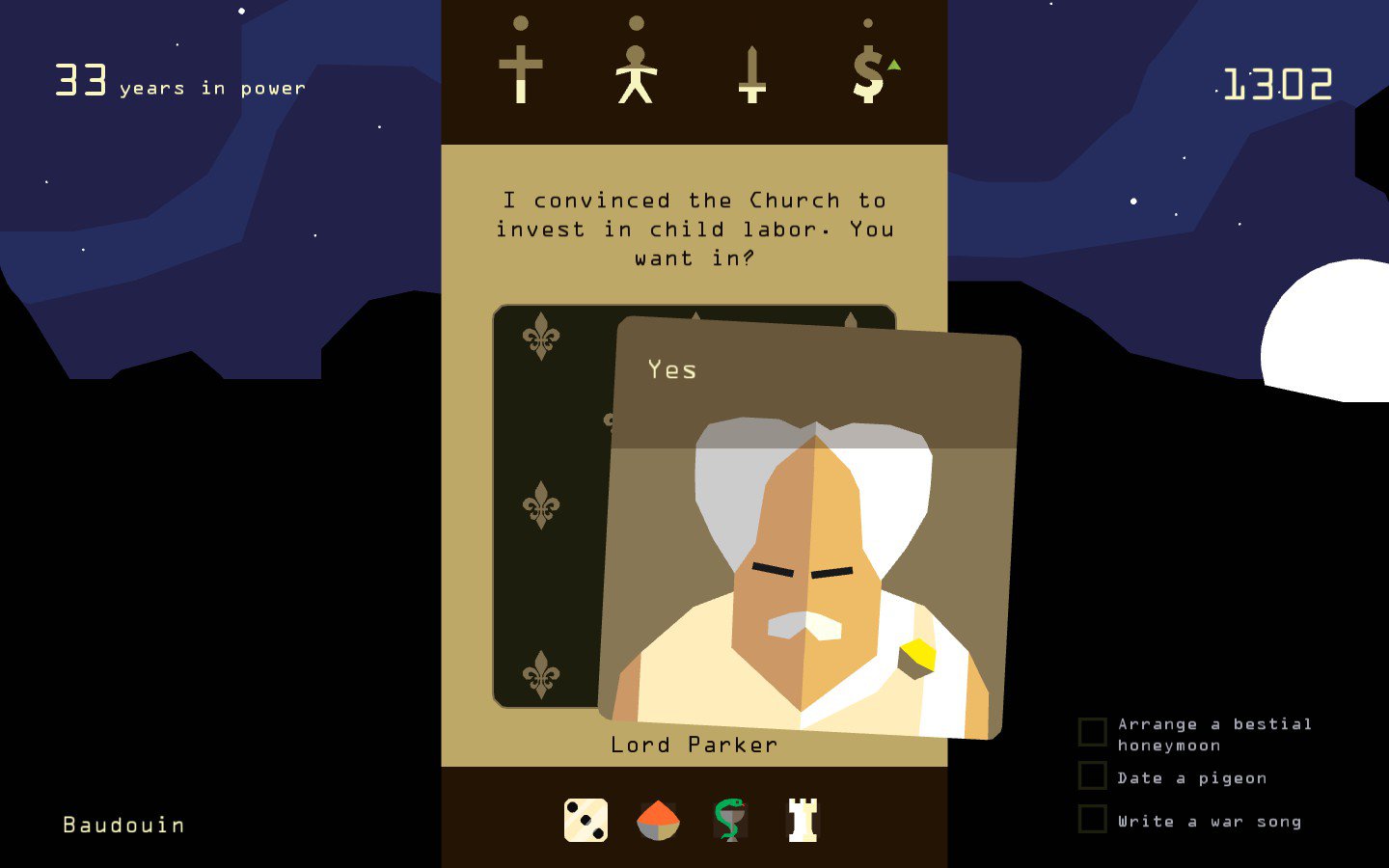 Reigns is a peculiar little game. It’s essentially a minimalistic card game about making choices. You’re presented with a situation and told to solve it by selecting one of two possible outcomes. Reigns is a gamified version of the swipe-centric system that Tinder employs, but instead of prowling for a partner, you’re the newly crowned—and utterly doomed—king of a troubled land.

Though simple, Reigns has a way of keeping you entranced. Every single action in the game boils down to a series of decisions that will affect your kingdom’s religious faith, military might, wealth, and general population. Your choices and their consequences ripple outward, turning a single king’s time on the throne into a delicate balancing act of needs, wants, and inescapable morality.

But what makes Reigns worthwhile isn’t that it will innately appeal to every Millennial’s love of swiping away at a screen. Rather, its randomized cards and binary choices make for a shining example of procedural storytelling. With each decision that you make and a bit of imagination, Reigns becomes more than a card game and something more akin to a series of short vignettes set in a kingdom where things never seem to go right. Reigns allows players to play the guiding force in a king’s rise and bear witness to their inevitable fall.

Take Thomas for example. He had the distinct honor of being my kingdom’s sixty-ninth ruler and in celebration of such an important number, I wanted to make his reign one for the ages. Under my guidance, I had hopes that Thomas would be remembered as a paragon of smart decision-making. He’d balance god and country with steadfast choices and a respect for his peoples’ needs.

He would also die. Horribly.

Over the course of five years, King Thomas pushed for religious reformation and dealt with an imposing Viking force from the North. Even when defeated, Thomas tried his damnedest. He called for his crippled military to march against Viking war machines just to buy his subjects a few more years of safety.

It was only after Thomas’ military was all but destroyed that his reign came to an end. With the Viking threat at his doorstep, Thomas’ General staged a military coup. Because of his iron will and design to protect the citizens of the kingdom, Thomas had unknowingly planted the seeds of discontent among his fighting forces. He was cut down, leaving only a legacy of a beheaded king.

Stories like Thomas’ are what makes Reigns special. There’s something exciting and endearing about leading an entire kingdom and its crazy citizens through simple decisions. The stories that Reigns produces are short, sweet, and almost always absurd. Where most games bog players down with a steady drip-feed of exposition, Reigns manages to tell complete and self-contained tales that live and die by your choices. With just a few meager lines of text and some bare-bones illustrations, every card you flip in Reigns’ functions as a new chapter in your story.

By making each new card work like a unique story beat, a single hand in Reigns often seems like a playable choose-your-own-adventure book, which is objectively the best kind of literature. Reigns turns do-or-do-not choices into branching tales that you actively take part in. And with a couple hundred cards in the game, every king’s story becomes a crooked web of royal choices. 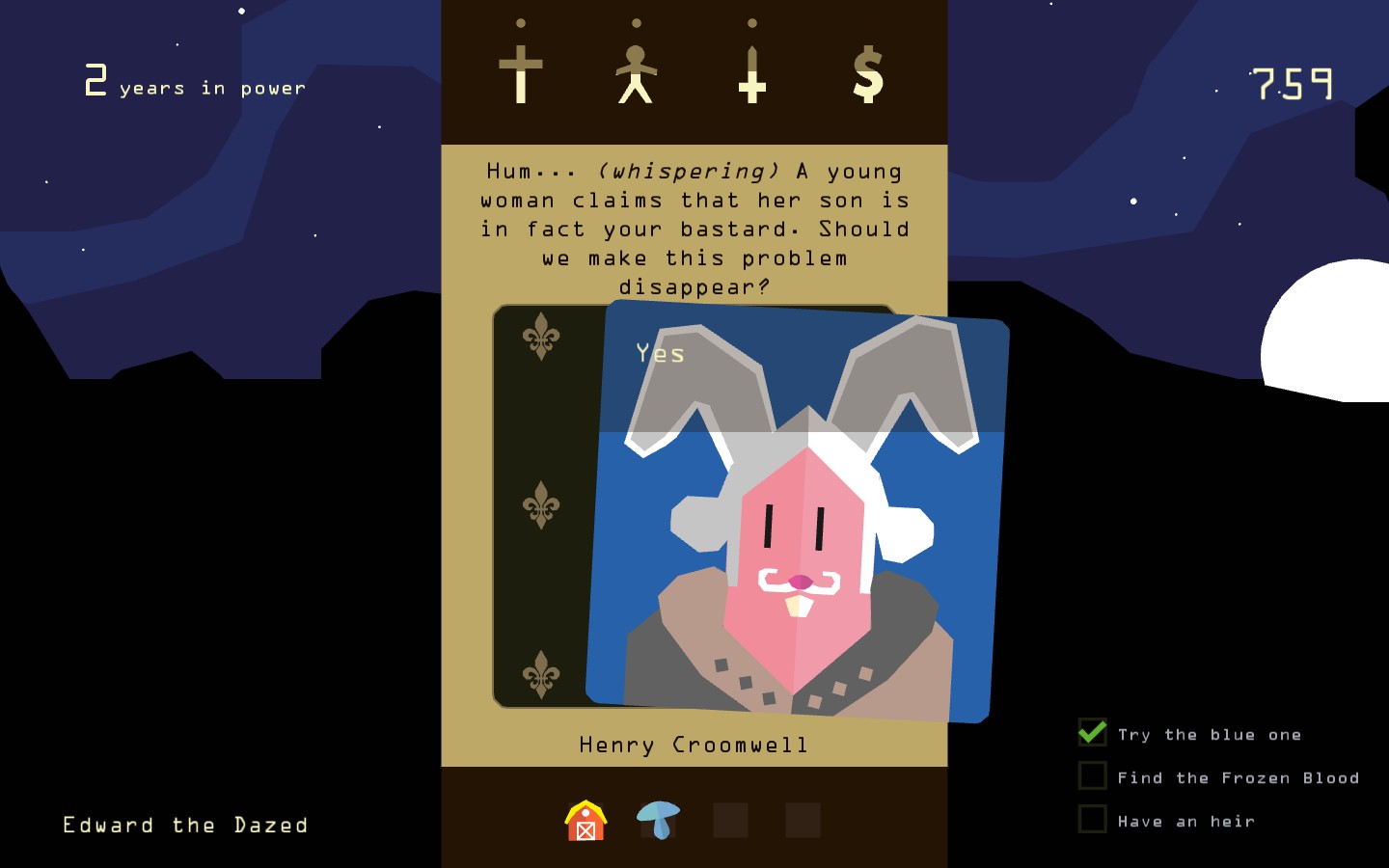 The random shuffle that signals the start of a new king’s time on the throne means that Reigns never plays out the same. Each new king still has to balance the kingdom’s four necessities though, which turns the game into a morally grey quest to keep things in balance. Choosing to burn some witches is just as valid as acknowledging a bastard child or marrying off a couple of werewolves, because they all have some strategic value that can keep your kingdom running. Reigns has a way of getting chaotic real fast and that’s when the stories—and your decisions that set them in motion—get the most interesting.

I’ve seen beheadings and drownings and more than a few Kings that died by simply eating way too much at feasts. Kings have been exiled and cursed by the people they’ve tried so hard to do right by. Reigns is a series of unfortunate events that you can’t not take part in. With only two decisions that boil down to either yay or a nay Reigns is a tightrope of tough choices and regicide.

In my time with Reigns, I’ve learned to embrace each King’s mortality. It’s not about surviving, really. Reigns is at its best when you just try and get by with the decisions you make and see how the story unfolds. I’ve waged wars and had affairs. Under my command, kings have ignored seemingly sound advice and become rich just as often as they’ve been thrown in dungeons after a failed Crusade. You never know what Reigns’ next randomized card will bring. Perhaps it’s a cryptic message from a spymaster, or maybe a demonic Son of Sam-type situation with the royal dog. Whatever happens, it almost always makes for a great story. 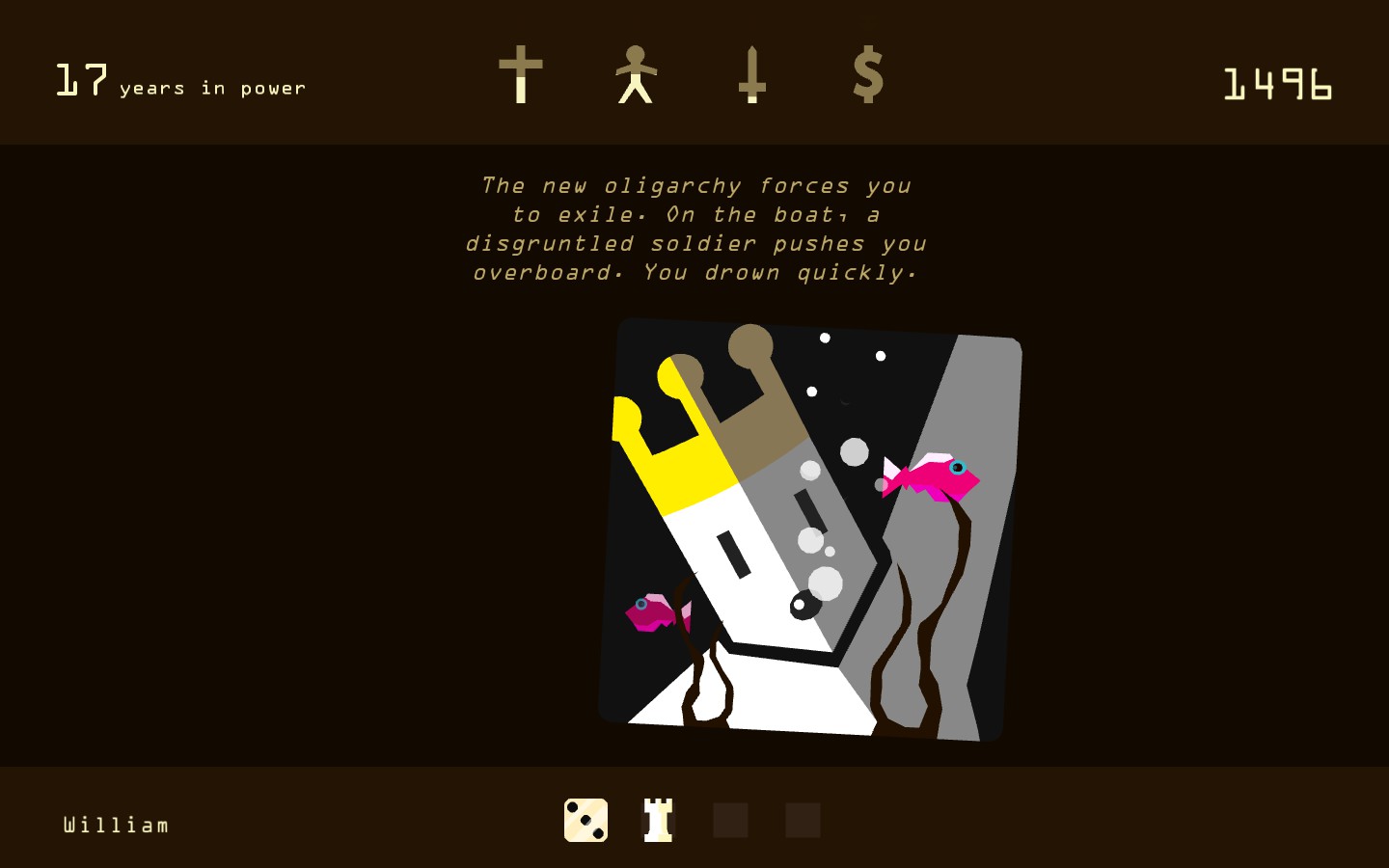 Death, at least with my poor leadership skills, seems to be inevitable. Every new King will die, but it’s seeing what happens between that first decision and your untimely end that makes Reigns so brilliant.