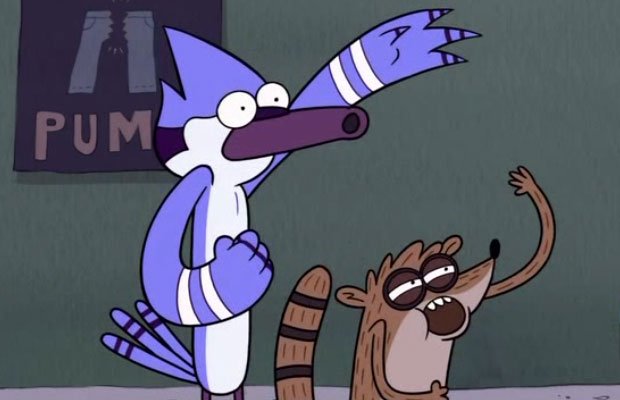 If you visit this site frequently, chances are you’ve heard us name-drop Cartoon Network’s fairly recent masterpiece Adventure Time. The Destructoid staff, in particular one Jonathan Holmes, loves to draw attention to it whenever possible. In addition to being unfailingly clever, aesthetically outrageous, and flat-out hilarious, Adventure Time is also incredibly gamer-friendly. Creator Pendleton Ward has crafted a show that marries animation with videogame logic in a manner that not even cartoons actually based on games have accomplished. But if Adventure Time takes you into the world of the game, another program very near to it on the evening lineup plants you on the couch on the other side of the screen.

What sets Regular Show apart is that it’s tailored for those Generation Yers who never wanted to leave the ’80s behind. The soundtrack features period artists like Poison, Loverboy, and New Kids on the Block, and the characters’ general fashion sense leans heavily on the dated side. This also means videogames — decidedly old-school, 8-bit videogames, to be precise. Where the show goes a step beyond is in how it conveys the characters’ appreciation and dedication towards games, helping in part to define not only their identities but the show’s as well. 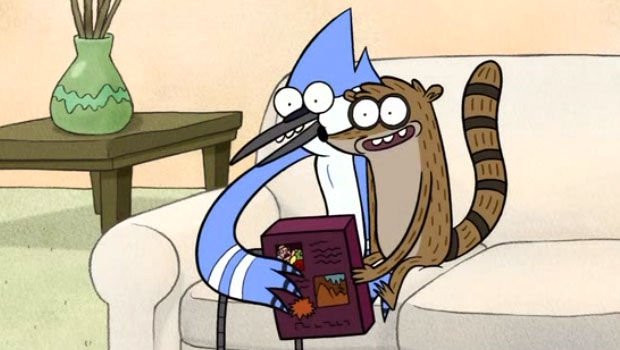 Regular Show follows the misadventures of Mordecai the blue jay and Rigby the raccoon, a pair of twenty-something city park groundskeepers who are more likely to engage in an afternoon-length rock-paper-scissors marathon than to do any actual work. Their coworkers include a muscle-bound yeti who skips like a little girl; a childlike Englishman with a head the size of a beach ball; a short and tubby man with a penchant for momma jokes but always screwing up the punchline; a ghost with a hand protruding from his head who’s appropriately named High Five Ghost; and a boss who’s an anthropomorphic yet fully functioning gumball machine.

“Regular” this is not! If this all sounds like one bad acid trip, that’s because… well… it literally is!

Mordecai and Rigby are textbook slackers, but in their schemes to shirk daily duties, they wind up compounding their problems exponentially. The beauty of the show is in how a seemingly mundane activity can lead to a sensational climax beyond your wildest fantasies. What begins as Mordecai and Rigby’s quest to score free chocolate cake from the park concession stand ends with their bargaining with an order of pan-dimensional elder babies to restore their friend’s stolen youth. In another case, a bottle of cologne that Mordecai hopes will attract the coffee shop girl is the catalyst that finds him drag racing against a posse of dudebro unicorns.

Some of the best highlights, of course, are the frequent videogame references. Now, any show can make a passing nod towards Super Mario Bros., Pac-Man, the Wii, or any of the myriad other overblown icons that have wormed their way into pop culture stardom and have ceased to represent that small, insular club of “The Hardcore.” Doesn’t impress me. No, it takes something extra special to demonstrate more than a cursory interest in the hobby.

In Regular Show, we bear witness to typical arcade etiquette. First, placing a quarter on the control panel lets everyone know that one has “got next.” 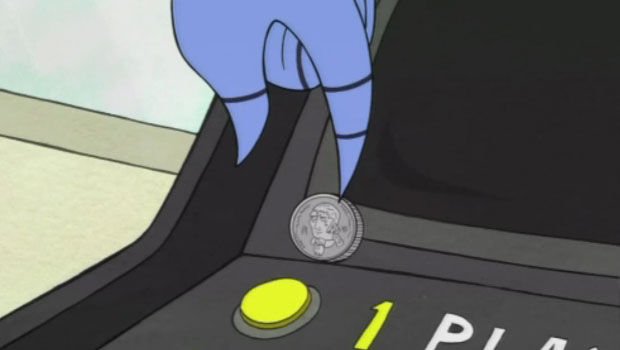 Second, when entering your high score initials, it’s acceptable to use the three characters allotted to spell out curse words or close approximations thereof. 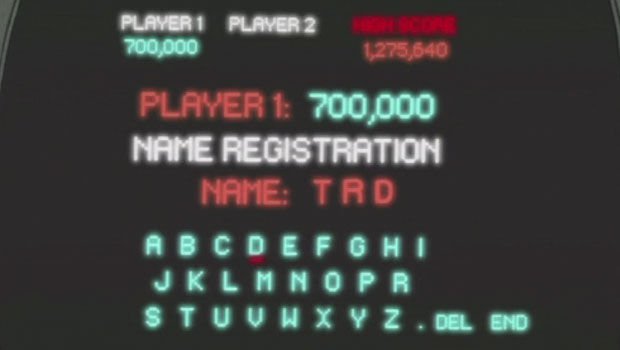 Finally, button mashing, though normally frowned upon, can be a highly effective strategy in the hands of a complete spaz. 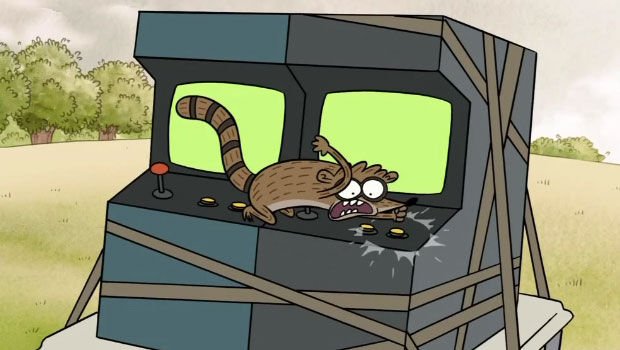 Nifty little nuggets, but no big deal, right? Ah, but what do the boys play back home? As goofball man children with little in the way of disposable income, Mordecai and Rigby turn to pawn shop paraphernalia for their home console needs. And what classic hardware are they rocking? 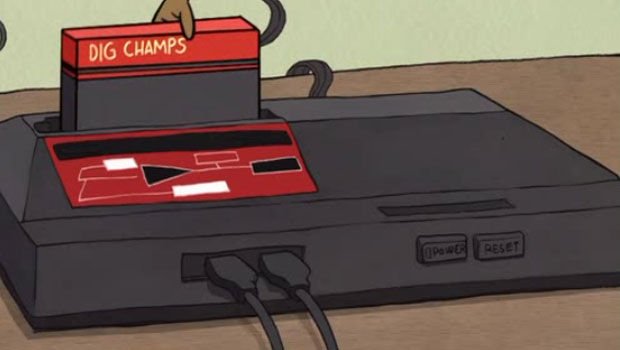 If you guessed “NES, duh!” then you would be WRONG! Sega Master System, baby! Everybody and their dogs owned an NES, but there was always that one kid at the end of the street who rolled with a different crew. The hardest of the hardcore. And you know what? I bet dollars to donuts that series creator J. G. Quintel was that kid.

How mind-blowing is that!? Has the Master System ever reared its head in other media? The closest analog I can think of is that boy from Surf Ninjas who could see the future on his Game Gear. I think we have a television first, guys!

With geek cred properly established, the show is free to run episodes in which the central focus is on a particular game or game-related concept. I want to discuss two such episodes — which happen to be the most recent ones — and illustrate how they perfectly encapsulate the spirit of the entire series.

In “High Score,” Mordecai and Rigby are tired of being treated like dirt and set out for respect and glory. They are convinced they can achieve this by honing their skills on the arcade cabinet recently installed in the coffee shop. The fictional game in question, Broken Bonez, is reminiscent of Excitebike, only instead of racing to the finish line, players have to pull off elaborate aerial stunts for points.

Upon breaking the world record, they are challenged by the holder of the universal record for an ultimate showdown. The record holder is, I shit you not, the giant, floating, disembodied head of Billy Mitchell! 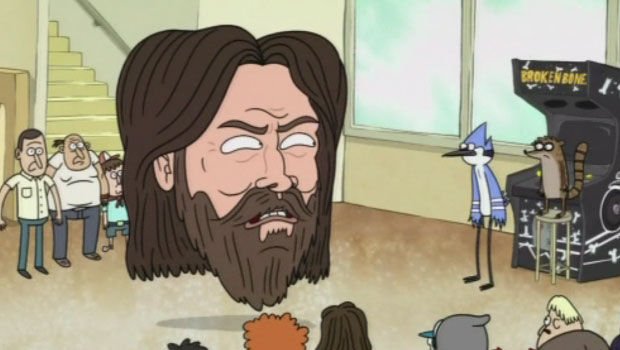 The character’s name is not Billy Mitchell, of course, but we all know what’s up. There is a fucking King of Kong reference on a Cartoon Network show. That doesn’t just happen by accident.

The rest of the episode plays out as you’d expect. The tag team of Mordecai and Rigby alternate turns with Billy, each trying to outscore the other. As the duo closes in on the record, Billy resorts to some rather dickish tactics to rattle their cages. Hey… just like in King of Kong! Brilliant!

In the following week’s episode, entitled “Rage Against the TV,” our boys are kickin’ it back home on the ol’ SMS. Their poison of choice? Double Dragon, bitches. 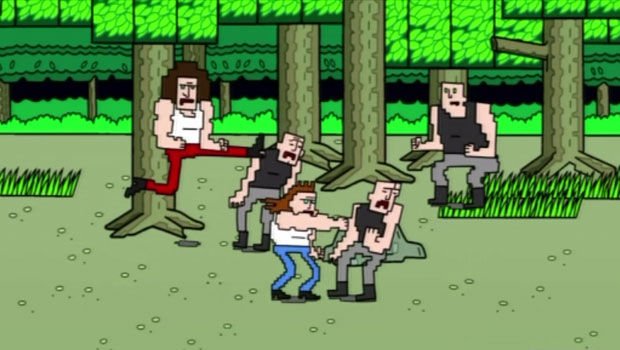 When Regular Show spoofs a particular game title, it doesn’t half-ass the execution. You’ve got two players decked out in red and blue, background music that could have been pulled directly from the source, and even an Abobo-like miniboss who they proceed to “kick in the junk” — the creators cleverly sidestep censor regulations by having wannabe-Abobo carry literal pieces of junk.

Just as they are about to tangle with the final boss, the nigh-invincible Hammer, the TV goes on the fritz. Mordecai and Rigby pause the game to search for a replacement set. What they eventually find is a shitty, foreign, black-and-white wreck that doesn’t even accept RCA inputs. 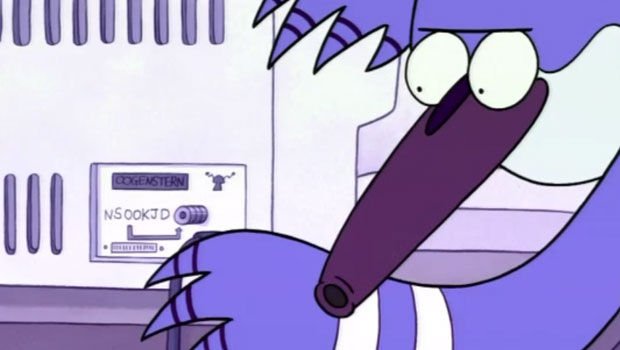 This is the part of the show where my heart went out to these guys. I felt like I was standing right next to them, fretting over faulty thrift store fodder. You guys remember RF adapters, those insufferable little devices meant to connect external hardware to TVs that only had antenna jacks in the back? They never worked all that well, did they? Heaven help you if you bring a game console over to a buddy’s house only to find that his set is nothing more than a tube in a wooden box. Good luck trying to find an RF adapter just lying around then, jackass!

Mordecai and Rigby could have just taken a trip down to RadioShack to solve their connection woes, but these guys fancy themselves regular MacGyvers. Using loose components from various other devices, they pimp out the B&W and jury-rig themselves a functioning monitor complete with an honest-to-God stereo speaker upgrade.

Unfortunately, their antics anger the machine gods and bring the Hammer out into reality. Go figure. 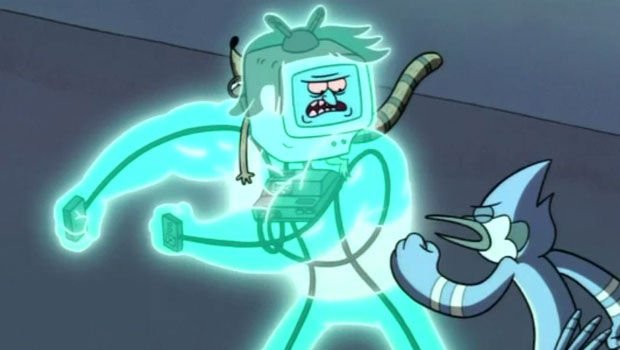 There are a few things you could probably glean from watching Regular Show. You might see its frequent referencing of gaming culture as another instance of mass media equating dedicated gamers with slackers — Mordecai and Rigby certainly fit that bill to the letter. However, I just can’t see it that way. There is so much love poured into every facet of the show, right down to the niche elements that only a handful of viewers would be likely to recognize. It’s a sharing of a passion, a spreading of good humor to anyone who cares to tune in.

Mordecai and Rigby are your prototypical ’80s babies. It’s so easy to relate to them because they behave just as we would. We sing praises of movies like Back to the Future and Indiana Jones, fondly reminisce cartoons like Transformers and Teenage Mutant Ninja Turtles, and wax nostalgic over the 8-bit gaming of our youth. Whether or not our memories have been glazed over by a dreamlike wax that filters only what we wish to remember, it’s fun to relive those moments for ten minutes every Monday evening.

With regard to representing the retro gamer, or simply gamers in general, it’s so refreshing to see a show that doesn’t treat gaming as an unhealthy distraction that’s only befitting of a single “special episode” mention in order to make a moral statement and then never brought up again. There’s no reason why gaming can’t be a major component of the characters’ makeup, especially considering how the hobby has blown up over the past decade. It’s a regular facet of many of our lives, and seeing how this is a “regular show” about “regular folks”… it only makes sense, right?

Now, for those of you who still don’t understand Regular Show‘s brilliance, I just have this to say: