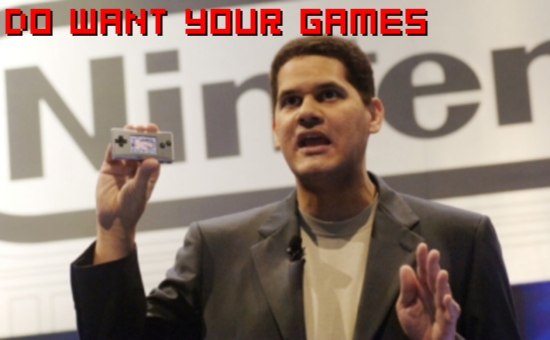 Reggie Fils-Aime, the ham n’ mustard flavored Nintendo of America president is suitably happy with Nintendo’s massive success as of late. Unlike other executives in the PR arena, however, the beloved beefburger boss can give credit where it’s due and respond to the work of his competition with a touch of class and respect.

Although claiming that he doesn’t feel it belongs on the PlayStation 3, Reggie had some good words to say about Sony’s upcoming exclusive LittleBigPlanet, claiming to be “very intrigued” by the DIY platformer. NoA’s meaty frontman also had some very kind words for Microsoft.

“Microsoft has done well,” admitted Sir Reginald. “There are a range of first-person shooter type games that are all very well done that could all do quite well on a Nintendo platform. Certainly, the Halo trilogy – anyone who would look at that and say, “No, I think we could live without it,” probably doesn’t think real long about this industry.” Reggie spoke highly of BioShock too, praising its “tremendously clever” writing and wishing for more products like it in the industry.

It’s nice to see a corporate spokesman admitting that he regards some of the competition’s property with a touch of envy, especially in an industry where insults and petty gonad-measuring contests are the norm. Of course, it’s very easy for a company to be so candid and complimentary when it’s on top of the mountain, but it’s still far classier than what we’ve seen anywhere else. Looks like that friendly image doesn’t begin and end with the products themselves.