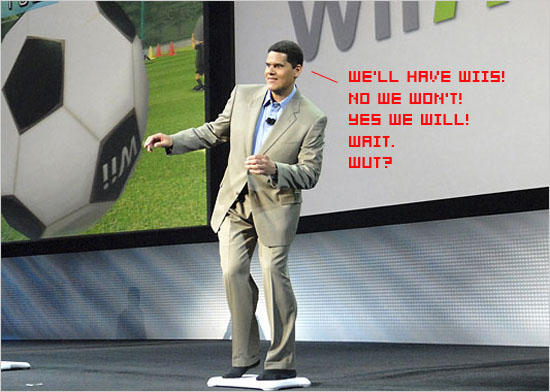 Reggie Fils-Aime is such a charmer. I bet this man has talked his way into the pants of more women than James Bond. Then again, it’s all about what you want to hear. Reggie’s most recent bold statement was in regards to the Wii software issues, which alongside the predicted Wii shortage for this Holiday season, didn’t look so good. Now it seems that has been all tidied up according to ol’ Reg:

“As every publisher talks about shifting over to Wii its creating this crush of production right now at our factories for software,” Fils-Aime said at a BMO Capital Markets conference.

He sounded a note of assurance, saying the problem was “very short-term.” “What we’ve done is to ramp that capacity up and work with the publishers to ensure that their best titles get into the marketplace and [they] have a productive holiday.”

Well, well. It’s not a surprise that Ninty has managed to pull this change from their posterior, but at the same time the teeter-totter effect of all these announcements has me feeling like a chicken with its head cut off. Not that I was aggro about the software issue personally, but frankly I do hope it’s the last of the issues, because the sound of children crying on Christmas morning is not pretty.

[Via GamesIndustry.Biz – Thanks Aerox!]