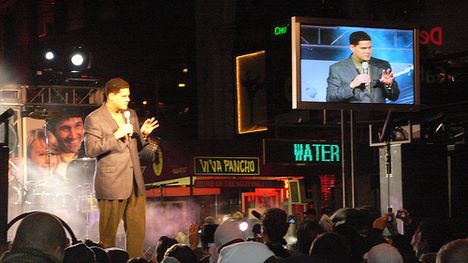 Nintendo of America president and all around badass, Reggie Fils-Aime, is anticipating one million Wii sales within the next two to three weeks. But Reggie doesn’t stop spewing out numbers there, he goes on to say that he expects an additional million sales by the second week of January.

In his recent interview with Reuters, Reggie expressed his feelings about the Wii’s cost and DVD functionality:

“We designed [Wii] from the get-go to be profitable, so it will be past this weekend and throughout its entire life. Because we’re a gaming company, we have to be profitable in the gaming business. It’s not like our competitors who can make profit in operating systems or TVs to offset their losses on the gaming side.”

“We took a pause to say, ‘We’re not going to do high definition. We’re not going to include a DVD because consumers already have two or three different DVD playback machines in their household,” Fils-Aime said. “We wanted to bring it back to a core gaming machine.”

Those are some nice numbers indeed. While Microsoft has already sold over seven million Xbox 360 systems, Nintendo’s predicted Wii sales are at least admirable. Seeing as how you probably won’t be getting a PlayStation 3 in time for the holiday season, it looks as though the Wii60 combo will be the way to go for most gamers.