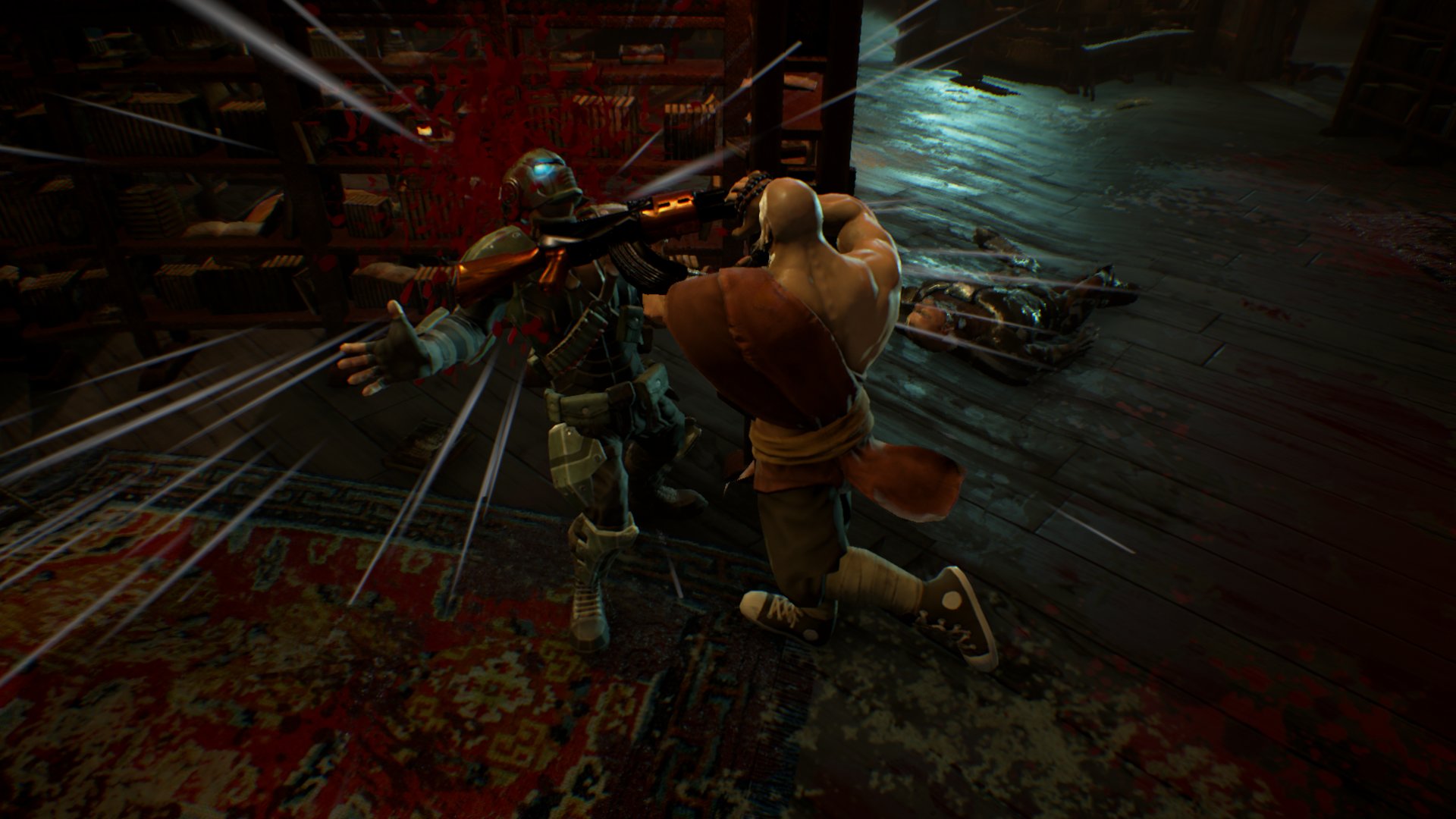 I’ve always had a fondness for classic beat-’em-ups. Games like Turtles in Time and Final Fight are favorites of mine and getting newer, more modern takes on the genre is usually an easy success. Sure, we get a dud every now and then, but Castle Crashers showed that arcade action could have a place in the present without resorting to cheap quarter-sucking tactics.

Redeemer may not be an evolution of beat-’em-ups, but it is definitely right up my alley. The art style may be bleak (and the main character looks like Kratos), but the game is so gloriously gory that any lack of combat depth washes away when you’re smashing a dude through a door or cutting someone up with a table saw. 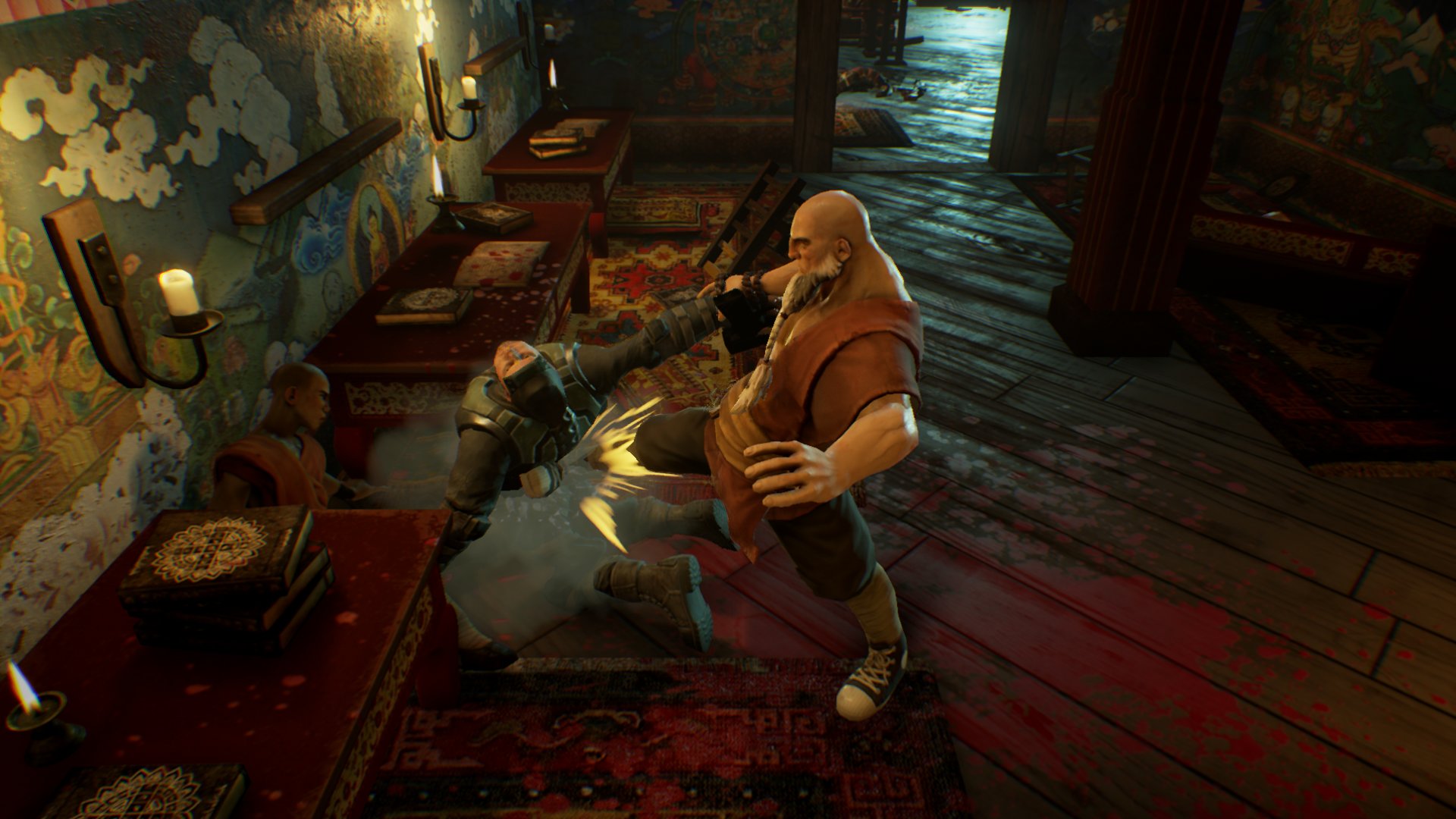 When I arrived at Gambitious’ booth, I was quickly ushered over to a overly large television at the corner. Even though I watched the main cutscene, I didn’t catch much of the story. The audio was being muffled by the surrounding convention noise, so I only got a few gists of the plot. Something about your haunted past and being chased for years; all a bit cliched, but a means to a brutal end.

Redeemer is pretty reminiscent of Hotline Miami, at least from a gameplay perspective. The field of view is top-down and you can manipulate the camera a bit by holding L2. You don’t attack by aiming with the right stick; this works exactly like older arcade titles. You have a light and heavy attack which can be strung together to form various combos and some variations on those (like charge attacks).

Along with using your fists and feet, you can also grab weapons and guns laying around the environments. All weapons have durability, so you won’t be plowing through foes with a fire-axe for the entirety of the game. You’ll definitely be able to tackle more than a few guys, but you can’t expect to always have some tool laying around to dispatch your foes. 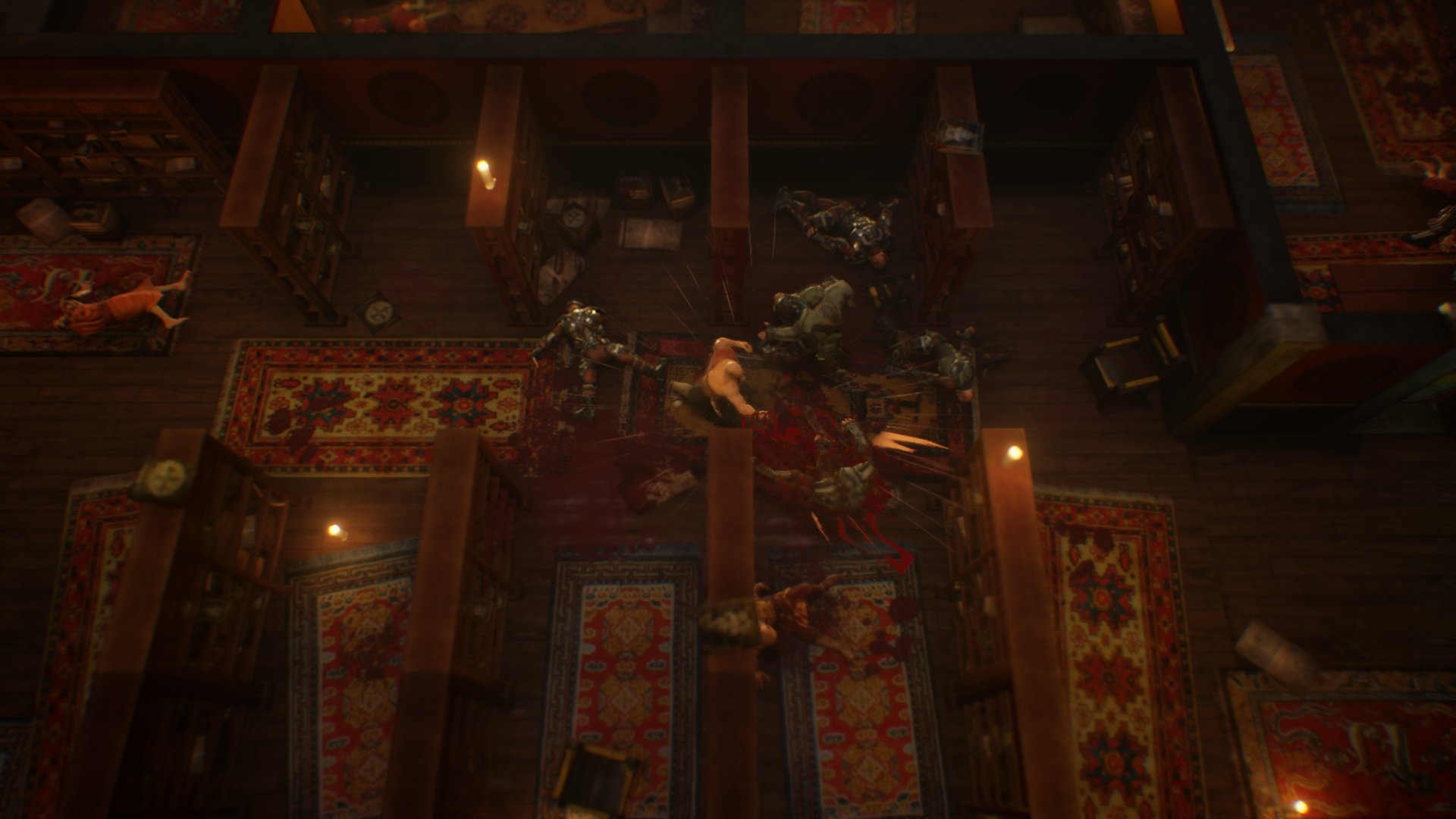 This is where the next feature of the game comes in: context-sensitive takedowns. While not the official title of these finishers, there are certain spots in the game world where grabbing an enemy will see your character smashing them through various objects. When you’re getting overwhelmed by mobs of baddies, doubling back to a room and throwing a guy into a fire can quickly turn the tide in your favor.

While the game isn’t difficult, per se, it does rely more on skill than most beat-’em-ups. You can block attacks, but you can also time your blocks to get a quick counter. It feels a bit like the Arkham games in that you can counter, string some attacks, and then counter the next guy to continue a combo string. Just mashing block won’t get you far, but the window of opportunity isn’t small, by any means.

Along with that counter, you can also disarm foes who are carrying guns. That is a huge boon when some jackass comes strolling in with a shotgun and starts taking potshots at you. It feels great to smack him in the face and then blast him out of a window. This also plays into how some encounters require enemy prioritization, since bigger enemies may be impervious to your fists and require environmental or weaponized takedowns. 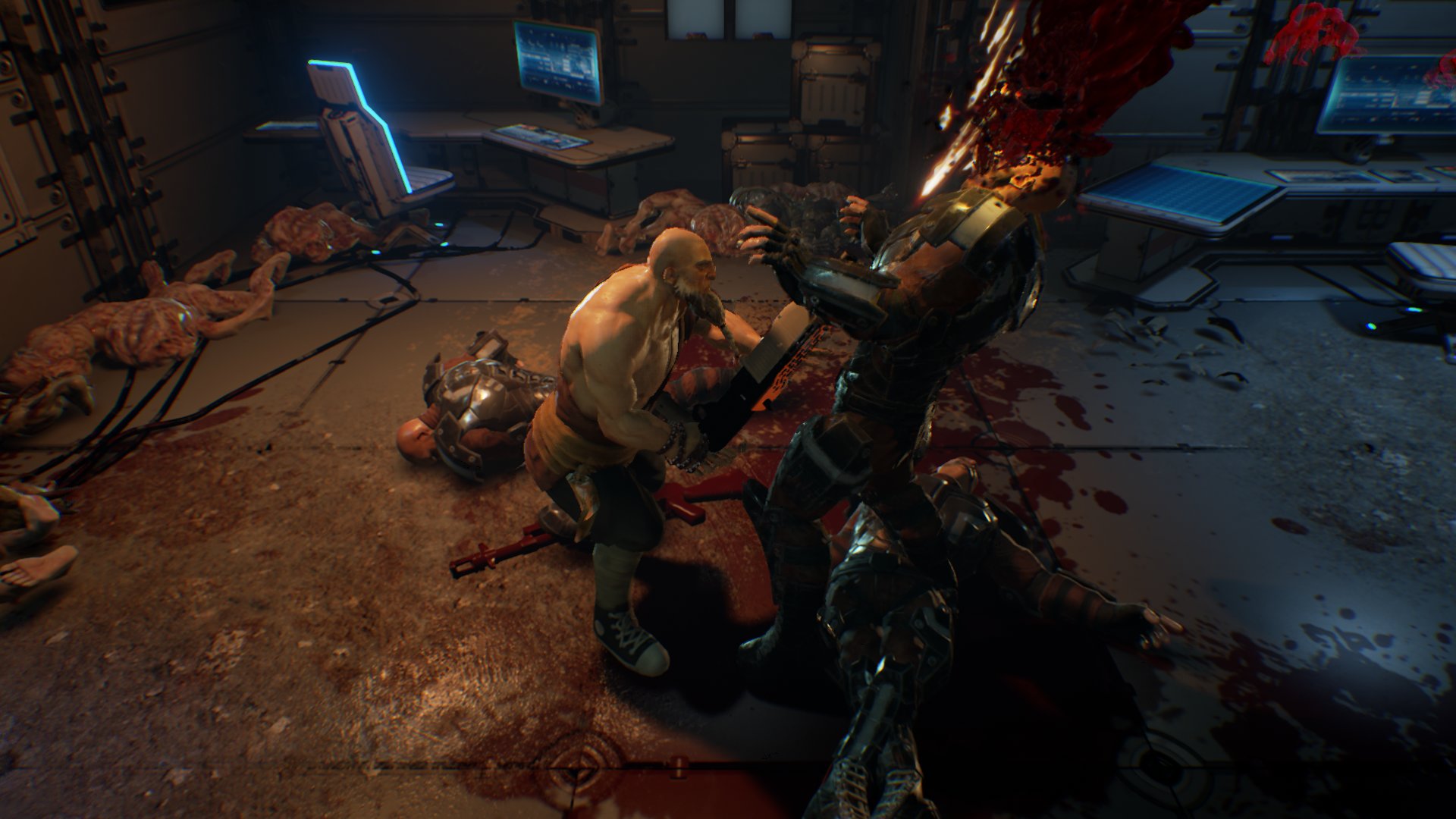 The main demo of the game didn’t really bring that up (since it was basically the intro to the whole story), but the bonus section they compiled definitely tested my skills. The general fodder you’ll be facing are some form of military guys and general humanoid thugs, but it looks like the game is bending a bit into sci-fi territory as I faced off against some crazy variety of mutated foes.

I apparently surprised the guys from Sobaka (the developer behind Redeemer) as I beat the bonus demo section. I like how the game rewards skill and an understanding of enemy movement instead of just blindly providing feedback to empower the player, so I was honestly having a blast even when I would die. I didn’t want to stop and I was given about a full hour with the demo (very nice!).

One quick thing I’d like to mention (that doesn’t fit in anywhere else) is that these guys certainly know how to not waste your time. I met the demo boss with lower health and died after making a foolish mistake, but the battle was preceded by a cutscene. I figured I’d end up watching that again, but that actually wasn’t the case. Why more developers don’t do this is crazy; why would I want to watch something I just saw? 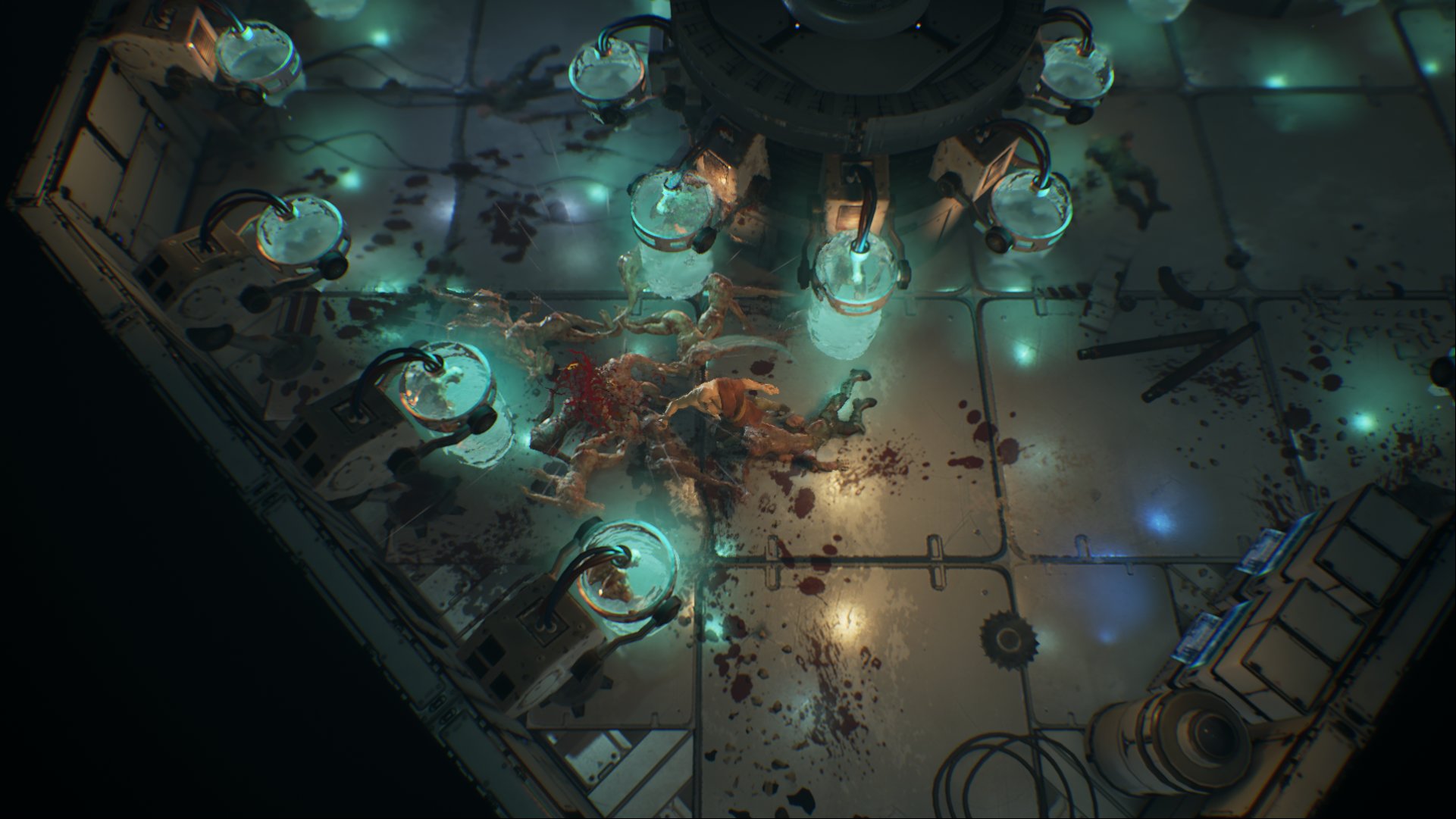 I even turned and thanked Dmitry Kachkov, one of the programmers at Sobaka. He laughed and I bet that put him at ease. He is passionate about Redeemer, which I could tell from the numerous times he would swear when I encountered bugs. Being an early build of the game, I was inevitably going to run into some kind of glitch, but Dmitry almost seemed to take it to heart.

He didn’t have any need to worry, though, because I was having a great time. Maybe not every idea present in Redeemer is groundbreaking or unique, but the game has a classic vibe that really connected with my old-school-loving self. I suppose the combat system could have more depth, but if you have any kind of fondness for Streets of Rage or Final Fight, you shouldn’t have an issue with just punches and kicks. 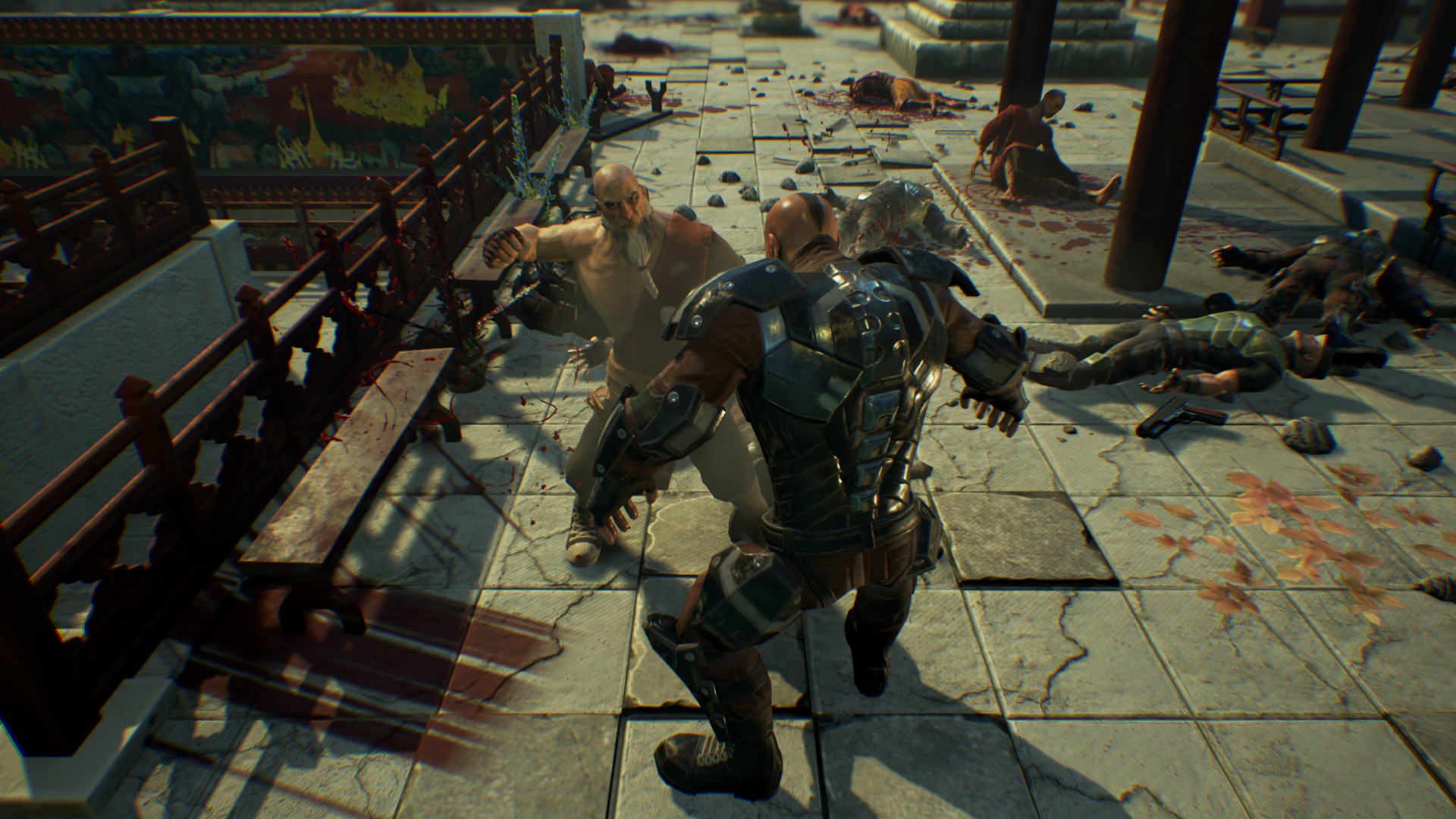 I can’t neglect the framerate issues, though. Nothing occurred during combat, but effects-heavy scenes definitely saw slowdown crop up. I suppose that might be to blame on the hardware present (an old Alienware X51), but it was a bit crappy to see. I’m sure that problem won’t exist for people with more beefed-up rigs, but it could potentially be an issue for anyone on older hardware.

As for where you’ll be playing Redeemer, it looks like the game is only slated for PC. Dmitry didn’t exclude other options, but he told me they are focusing on making this the best possible PC game they can. Seeing as how I used a gamepad, I wouldn’t rule out ever playing this on your console of choice (a Switch port would be awesome).