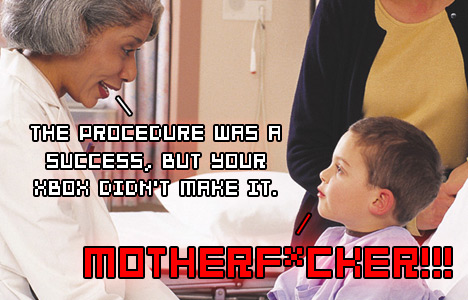 According to the official Guitar Hero II forums, Red Octane, tired of people weeping, and wringing their hands with grief over the spotty performance of their shiny, new whammy bars, has released a patch for Guitar Hero II via Xbox LIVE that should alleviate the issue.

The humor only begins there, though, as reading the thread where they announced the patch reveals that 90% of all replies were from people who installed the patch and subsequently had their 360s (metaphorically) catch fire, run around the room screaming, and collapse in utter agony. The symptoms seem pretty similar in all cases, with people having downloaded the patch and experiencing frequent lock-ups soon after. Compounding that thread o’ bad news, is this thread over on the official Xbox forum filled to bursting with people whose 360s seem to have murdered themselves upon contact with the patch.

Thankfully, I lucked out and my whammy bar works like a German clock, but now I’m terrified to download this patch until Red Octane hires a QA department that isn’t paid in cocaine and barbiturates. If any of you guys have borked your systems with this patch, hit up the comments. The general consensus is that you’re going to have to RMA the system back to Microsoft, so it isn’t like you have anything better to do, right?