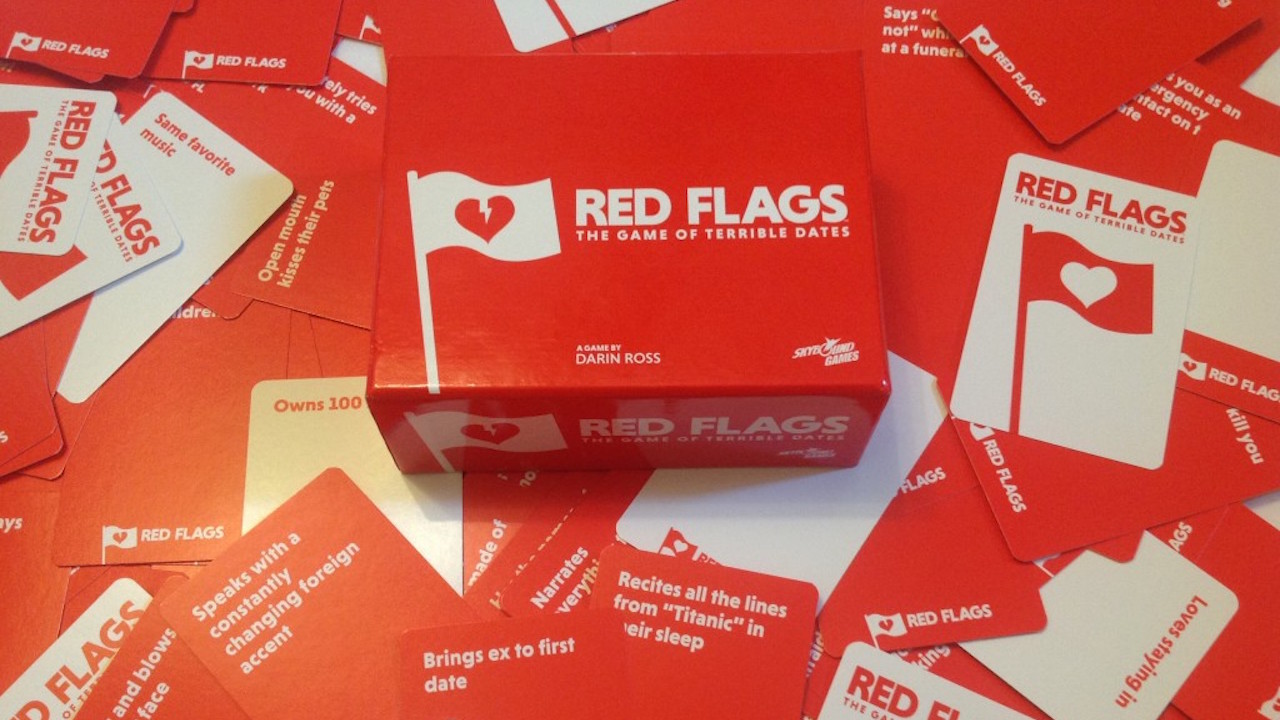 Great fun for the inebriated

One of the weirdest moments of PAX West 2016 for me (and that’s a long list, just ask Myles) was when I was flagged down on the show floor to give the card game Red Flags a shot. That in itself isn’t weird; when you have a yellow media badge, folks really want you to come see their thing, especially on the lower-budget sixth floor. The game itself wasn’t all that weird either. You are assembling the personality traits of a hypothetical long-term romantic partner — two positive aspects followed by a wacky red flag, something like “Starts every sentence with ‘Actually'” or “Always dresses like a clown.”

No, the weird part was my game partners. There was a representative on-hand from Skybound Entertainment to demo the game, but in terms of PAX attendees, it was me and a mother and son duo. Before that day, before a middle-aged woman essentially pieced together an ideal mate for her adult son right in front of me, I didn’t know my skin could even crawl like that.

Red Flags doesn’t belong on a convention floor, nor does it belong amongst families. It belongs with a group of smarmy 20-somethings, most of them inebriated, huddled around a dorm room desk. That scenario may not be possible for everyone, but as long as you get the important part (being drunk) nailed down, you should be just fine.

First, let me give you a pro-tip. Your friend group probably has someone with really bad taste in partners. Maybe they’ve made out with a lot of real jerks. Maybe their long-term relationships are car wrecks waiting to happen. You love them, but they gotta up their standards. Here’s what you do: during a round, you pull out a blank red flag from the deck and hand it to them. Because apparently for them, there’s no such thing as a deal-breaker.

Of course, that burn only works if you’re really comfortable with your friends. Bonus points if the sauce has begun to flow. I keep leaning on the drinking thing not because every card game is more fun in a group of drunks or stoners (although this is true). When people get inebriated, lips get looser. Red Flags is a funny game with a lot of possibilities, but if you want to elevate your time with the game, you need honesty. You need friends who can be honest with each other, and if you need libations to make that happen, you do whatever you need to do.

My only complaint is the build quality. Red Flags’ cards feel thin, even by the standard of wacky Kickstarted card games. They started to bend after a single game, something that never happened to my three-year old Cards Against Humanity set. If Red Flags wants to see any measure of long-term success, publisher Skybound Entertainment needs to make sure people can pull the core set out for years to come.

Red Flags is less competitive party game and more jumping-off point for short-form improv. It requires more imagination than you would expect, with a pile of well-designed cards that offer enough rope for every player in the game. It’s maybe not worth $30, especially when you consider the low quality of the physical cards, so keep your eye out for a sale. A solid game of Red Flags is more fun than most of the party games I’ve played.