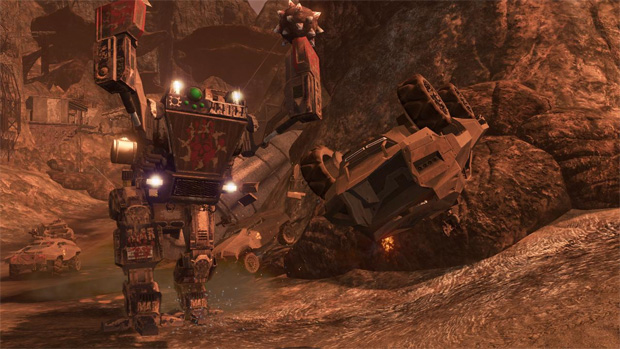 According to Major Nelson, The first bit of downloadable content for Red Faction: Guerilla is available for download on Xbox LIVE Marketplace. The content, dubbed “Demons of the Badlands,” is a prequel campaign chapter to the core game. Years before Mason boots hit Martian dirt, the pointy-headed Marauders had violent contact with the EDF. In this chapter specifically, you’ll be seeking revenge on the behalf of the Marauders. The EDF has recently sacked their home and the Marauders are revolting against the chains of oppression.

The content is 800 Microsoft Banana Dollars and comes with more than just a new single-player campaign. Volition added seven weapons to the fold and created three fresh vehicles for you to use. One of them is the brute in the header.

We don’t have our hands on this yet and we’re interested in hearing what you have to say about it. How is the content? Is it worth the purchase?

[Update: The DLC is not available yet. You know, the one morning I decide to not fact check Major Nelson is when this happens. I apologize if I made you search for the content just to find if it wasn’t there. It is slated to hit on the 13th Thanks for the heads up, guys.]