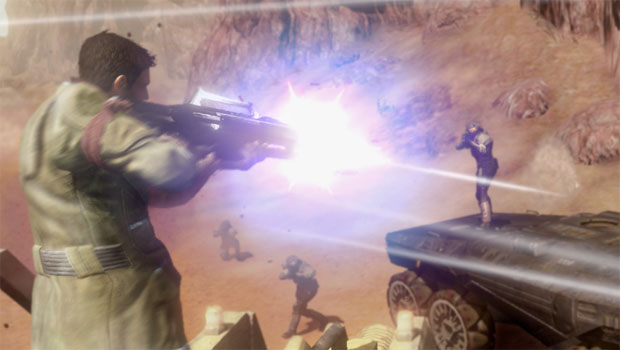 The next Red Faction game is set to be revealed tomorrow, and it’s been confirmed as Red Faction: Armageddon.

Word comes from a promo spot for the next episode of GameTrailers TV, which will air the world premiere trailer for Volition’s upcoming title; the show airs tomorrow night on Spike TV. THQ recently snatched up a handful of Armageddon-related domains, leading some to speculate the publisher would be revealing the title at E3. They were right.

Papers I have signed are forcing me to say that “not much is known about Red Faction: Armageddon right now.” But THQ’s VP of Core Games Danny Bilson has been shooting his mouth off about it for awhile. In March, Bilson told Joystiq that the title “goes back to the old Red Faction because about 80% of it is underground”; he also said the title was slated for a March 2011 release.

So there you have it — trailer tomorrow. As I’m sure I’ll be writing a lot over the next few weeks, expect to hear and see even more at E3