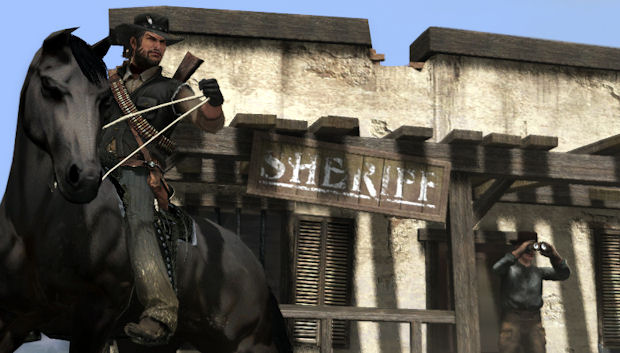 Rockstar Games has revealed the bonuses that Red Dead fans have in store when they pre-order Red Dead Redemption. The Western sequel will be offering a variety of goodies at a number of different retailers. Yes, Rockstar is doing that annoying thing where different stores have different things, so you best pick wisely.

So far, the UK retailers have been announced. Here is a list of what you can expect:

The Deadly Assassin Outfit – GameJohn Marston’s “Deadly Assassin” outfit causes your Dead Eye meter to regenerate at twice the speed. With more Dead Eye, you have more time to place each shot with total accuracy, making you the deadliest gunslinger in any fight. In the UK The Deadly Assassin Outfit is exclusive to GAME customers.The Golden Guns Weapon Pack – Amazon UKThe player who wields the exclusive Golden Guns receives more Fame for each kill. The more Fame you get, the more in-game side missions become available. So there will be more opportunities to duel, more kidnapped townsfolk to rescue and you can bribe lawmen for less. In the UK The Golden Guns Weapon Pack is exclusive to Amazon customers.The War Horse – HMVThere are countless horses to be found in the massive world of Red Dead Redemption, but none is stronger, faster or tougher than the exclusive War Horse. Whether storming gang hideouts, exploring the wilderness for hidden treasure, or outrunning the law, the War Horse gives gunslingers an advantage in nearly every situation. The War Horse is exclusive to HMV pre-orders in the UK.

I really wish publishers wouldn’t broker these store-exclusives since it divides the market and just confuses people. I see no reason why this practice could ever be good for the consumer. Still, this is what’s happening and you’ll have to deal with it. I guess if I had to choose, I’d take the Golden Guns. What about you?