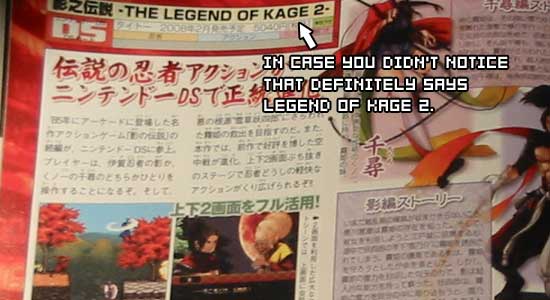 For me, the NES version of Taito’s Legend of Kage pre-dates Wii Sports as the non-gamers game of choice. For whatever reason, my mother of all people, decided she was really into Legend of Kage. It’s 1987 (so I’m like nine-years-old at the time), and here’s my mother, running rings around red and blue shinobi like it’s her job. She was 45% more successful than I was at saving Princess Kiri during any given gameplay session.

My point here is this: I have fond memories of Legend of Kage, and here I was thinking that the series was all but dead. But god bless Taito, as they’re currently working on a sequel to the game for the Nintendo DS. Currently, there’s not much information on the game other than what you see in this blurry scan taken from Famitsu, but you can bet I’m going to start stalking Taito PR first thing tomorrow.

This would be the first true sequel to the game — the other Taito developed NES game, Demon Sword was close, but no cigar. I really hope Taito brings back that magic scroll that makes ninjas inexplicably fall to the ground dead, while the game tries to induce a seizure. Because that was really great.

[Via DS Fanboy, Thanks Action Bastard (NOT TheGoldenDonut, who also rules)!]