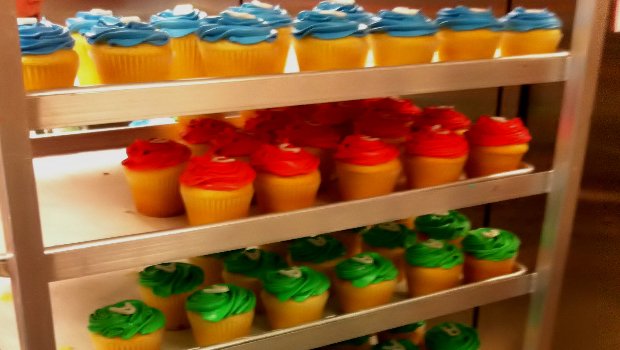 There have been many arguments concerning the controversial ending for Mass Effect 3 — some melodramatic, some perfectly valid. This new move from those snubbed by the trilogy’s conclusion, however, wins the award for sheer wit and genius.

Over four hundred cupcakes were sent to BioWare’s office, delivering a tasty message. Each cake was iced in one of three colors — red, green, and blue — to represent Mass Effect 3‘s ending choices. The cakes are vanilla, and so is all the icing, the message being that no matter what choice you make, it’ll all have the same generic flavor.

A single person went out of his way to pay Fuss Cupcakes $1,005.00, but within an hour of announcing his crafty scheme, fellow fans PayPal’d him more than he’d spent. All donations were rewarded with the chance to attach a personal message to the cakes, while the leftover cash was given to Full Paragon.

BioWare received the cakes, and donated them to the Edmonton Youth Center.

Whatever your views, this is pretty magnificent bastardry, and probably the best thing to come from this whole debacle. Some call it, “incredibly passive-aggressive,” but I think it’s more passive-aggressively incredible. Screw it, debate’s over, give the fans what they want. They’ve earned it now.