Ever want to be so tiny you could have a brawl on your coffee table? Me neither, but Sony’s Reality Fighters for NGP — a game that uses augmented reality as its hook — can make that a reality.

Utilizing the game’s cameras, you’ll be able to take a picture of your face (or your cat’s face, as I intend to) which will then be mapped onto an in-game fighter. Next, you’ll be able to customize your combatant by choosing a fighting style. There were 12 available to us, including a shambling “zombie” style.

Reality Fighters also features a ridiculous assortment of costumes you can adorn your fighter with, as well something like 200 weapons types for the ultimate augmented reality beat down. 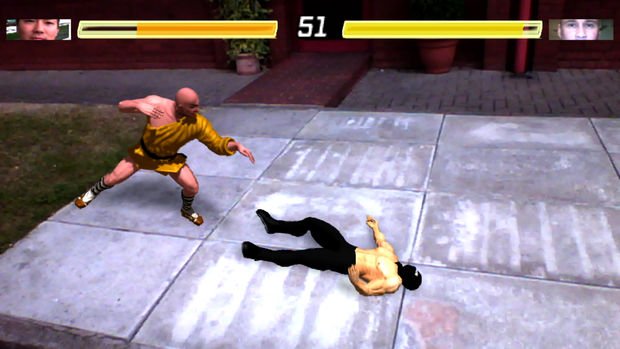 My first match began on a small table that sat in front of me, but it can presumably take place anywhere in your real world environment. Pointing the NGP camera at the table, I chose the best spot for the battle and hit X to begin. The fighting mechanics seemed fairly basic, with combos strung together using the face buttons. It had a similar feel to something like Tekken, although my first impression is that it’s nowhere near as deep (unsurprisingly) or polished as Namco Bandai’s fighter.

The game’s developer, Novarama, isn’t a stranger to augmented reality titles — it developed Invizimals for the PlayStation Portable. But it’s important to note that while that tile required the use of a card (similar to how the 3DS functions), Reality Fighters doesn’t require any additional accessories.

Reality Fighters is expected to launch alongside the NGP.